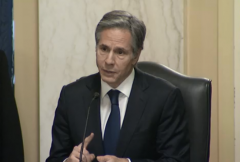 (CNSNews.com) – Secretary of State nominee Tony Blinken made clear Tuesday he disagreed with many aspects of the Trump administration’s foreign policy, but acknowledged – and pledged to build upon – its progress in the Middle East, and said he believed that “President Trump was right in taking a tougher approach to China.”

“I disagree very much with the way he went about [dealing with China] in a number of ways, but the basic principle was the right one and I think that’s very helpful to our foreign policy,” Blinken told the Senate Foreign Relations Committee during his nomination hearing.

Blinken, who served as deputy secretary of state in the Obama administration and has been a longstanding adviser to President-elect Joe Biden, was invited by Sen. Ron Johnson (R-Wisc.) to share his thoughts on various Trump foreign policy positions and achievements.

Blinken said he applauded the normalization agreements between Israel and four Arab nations, saying that “it makes Israel safer, it makes the region safer, it’s a good thing, and yes, I would hope that we can build on that.”

He also voiced support for the administration’s work to ease tensions between warring Balkan neighbors Serbia and Kosovo by focusing on economic normalization, and he agreed that “getting our NATO allies to invest more is a good thing. I think that’s shared across administrations and across parties.”

On the other hand, in response to a question, Blinken said he continues to believe that killing Qods Force commander Qassem Soleimani – in a drone strike ordered by Trump last January – left the U.S. less safe in the region.

While he contended that “no one is shedding a tear for the demise of Qassem Soleimani,” Blinken said the consequences of killing him had included Iran’s missile attack on bases in Iraq that left 110 U.S. personnel diagnosed with traumatic brain injury, enhanced threats to U.S. personnel from Iran-backed militias in Iraq, and Iran “acting out in a whole variety of ways” in the region.

“I think, on balance, that that action actually left us less safe, not more safe.”

Earlier in the hearing, Blinken said there was no doubt that China “poses the most significant challenge of any nation state to the United States, in terms of our interests and the interests of the American people.”

He said there were adversarial and competitive aspects to the relationship, “and some still cooperative ones when it is in our mutual interest.”

When looking at how to deal with the challenge, he said, “we have to start by approaching China from a position of strength, not weakness.” Blinken went on to argue that that strength would derive from working in concert with America’s allies – and not “denigrating” them – and from being engaged and leading in international institutions, “not pulling back and ceding the terrain to China.”

‘China and the virus’

During questioning by Sen. Lindsey Graham (R-S.C.), Blinken said he agreed with Secretary of State Mike Pompeo’s determination announced earlier in the day that China’s policies in the Xinjiang region constitute genocide, saying “that would be my judgment as well.”

“Do you believe the Chinese Communist Party misled the world about the coronavirus?” Graham asked.

“I do,” the nominee replied.

“What we do know already with regard to China and the virus is they did not provide transparency, they did not share information, they did not give access when it mattered most, in the early days of this virus,” Blinken said. “Had they done so, it’s possible that the course of this virus would have been different, and we could have dealt with it sooner and more effectively.”

Looking ahead, he said, “I know people talk about the punitive. I would be very focused on the preventative, which is to say, what steps will China take going forward?”

Broadly, Blinken expressed support for a bipartisan approach to foreign policy, saying that “no-one, no party, has a monopoly on good ideas. And I hope that working together, we can pool all the good ideas, from both sides of the aisle to try to advance the security and wellbeing of the American people abroad. I welcome doing that.”