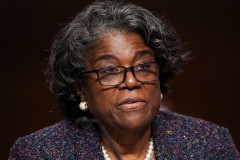 Linda Thomas-Greenfield speaks before the Senate Foreign Relations Committee hearing on Wednesday on her nomination to be the U.S. ambassador to the United Nations. (Photo by Greg Nash/Pool/AFP via Getty Images)

(CNSNews.com) – The confirmation hearing for President Biden’s nominee to be ambassador to the U.N. was not all smooth sailing Wednesday, as Foreign Service veteran Linda Thomas-Greenfield was grilled repeatedly about a speech she delivered to a Confucius Institute at a university in Georgia in 2019.

Thomas-Greenfield said several times she deeply regretted having given the speech, at a Confucius Institute-hosted event at Savannah State University in late 2019.

She said she had agreed to deliver the speech – for which she was paid a $1,500 honorarium from the SSU, not the Confucius Institute – because of a longstanding relationship with the historically black college.

Confucius Institutes are purportedly designed to promote better understanding of China, its culture and language, but are widely accused of serving as propaganda tools for the Chinese state.

According to the Trump Education Department, they “are well known to actively facilitate one of the world’s most repressive, authoritarian regime’s insidious efforts to bolster its influence and image at classically liberal universities.”

A 2019 bipartisan congressional report focusing on the institutes prompted federal investigations into foreign funding of U.S. universities. The Trump administration last year called on all schools to shut down their Confucius Institutes – and the one at Savannah State University was among those to close last summer.

Focusing on U.S. and Chinese engagement in Africa, Thomas-Greenfield’s speech was controversial inasmuch as she said nothing about China’s human rights abuses and referring in a largely neutral way to the Belt and Road Initiative, Beijing’s ambitious infrastructure program which critics say imposes unsustainable debt burdens on poor countries.

“The conventional wisdom is that China’s increased focus on the continent is motivated by short-term commercial and strategic interests,” she said at one point. “That narrative is not nuanced enough, and experts point to instances of how Beijing’s motivations are broader and more oriented towards long-term cooperation.

Sen. Ted Cruz (R-Texas), a longstanding opponent of Confucius Institutes, was among the fiercest critics of the speech, describing it as “cheerleading for the Chinese Communist Party.”

“You said you’ve spoken out against China’s abusive practices,” he said. “Perhaps you have elsewhere, but I can tell you, I’m holding the speech that you gave at the Confucius Institute, and I can’t find a single word of criticism in this speech.”

“As I said, I regret this. I, you know, this is one speech in my 35-year career,” she said. “And do I regret that speech, but if you look at what I have done prior to that, there is no question that I understand, I am not at all naive about what the Chinese are doing, and I have called them out on a regular basis, including today.”

Sen. Cory Booker (D-N.J.) took issue with the criticism, saying that every member of the Senate Foreign Relations Committee likely has something in a speech in the past that they regret.

“I’m particularly galled that in the spirit of bipartisanship, which we usually have, that you were treated like you were recently about one speech that you had already thoroughly explained to numerous members,” he told the nominee.

Thomas-Greenfield is a former assistant secretary of African Affairs and ambassador to Liberia. Other foreign postings included Nigeria, Gambia, Kenya, Pakistan, and Jamaica.