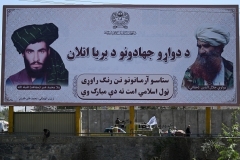 (CNSNews.com) – On the day that the Biden administration pledged $64 million in humanitarian assistance for Afghanistan, skeptical Republican lawmakers asked Secretary of State Antony Blinken if the money could end up in the hands of Taliban terrorists.

“Is it the policy of the United States of America to take hard-earned tax dollars and pay terrorist organizations?” Rep. Scott Perry (R-Pa.) asked Blinken during a House Foreign Affairs Committee hearing on the Afghanistan withdrawal.

“It is not,” replied Blinken.

“It is not,” repeated Perry. “So your testimony earlier was – is that we’re sending taxpayer dollars right now to Afghanistan for humanitarian relief. Who are we sending that to?”

Blinken said the funds would go to non-governmental organizations (NGOs) and United N Nations agencies working on the ground – “not to the Afghan government.”

Asked how the administration would ensure that the money did not reach the Taliban regime, Blinken said, “As we do around the world in places of conflict, where we provide humanitarian assistance working through U.N., working through NGOs, with long-tested methods to make sure that the assistance goes to the people who need it.”

“You’ve announced today with great fanfare and great pride that you are providing $64 million in humanitarian assistance to the people of Afghanistan,” noted Rep. Greg Steube (R-Fla.).

“You can’t even get our people out of the country,” he told Blinken. “But we and the American people are to believe that $64 million of or tax dollars, to be sent to Afghanistan, won’t fall into the hands of the Taliban or other terrorist organizations.”

The announcement of the new aid came in a statement from U.S. Ambassador to the U.N. Linda Thomas-Greenfield, delivered remotely to a high-level ministerial convened by U.N. secretary-general Antonio Guterres in Geneva on the humanitarian crisis in Afghanistan following the Taliban takeover.

“Even before the recent transition, over 18 million people – almost half the population of Afghanistan – were in desperate need of humanitarian assistance,” she said. “Now, at this moment where assistance is even harder to come by, and women and girls are under particular threat, the need is even greater still.”

“This funding will help provide lifesaving food assistance. It will meet critical health and nutrition needs,” she said. “It will address the protection concerns of women, children, and people who belong to ethnic, minority and other religious groups. And it will help more children – including girls – go back to school.”

“We have all heard the reports that the Taliban are obstructing and interfering in aid delivery and protection efforts, prohibiting female staff from saving lives, and even exacting retribution against people benefiting from aid or providing it,” she said.

“That is frightening and unacceptable, and, frankly, destabilizing to Afghanistan and to the region. It cannot continue.”

Ninety-six U.N. member states took part – mostly remotely – in the meeting in Geneva, and U.N. humanitarian chief Martin Griffiths said at the end that more than $1.2 billion in aid has been promised in total.

Guterres told reporters afterwards that the Taliban has provided written assurances that it would respect the humanitarian operation and guarantee access – and even provide security escorts “when there are situations of insecurity that would justify it.”

He took this to mean not only “acceptance” on the Taliban’s part, but also “an attitude of support.”

Guterres defended the decision to engage with the terrorist group that seized power by force.

“It is impossible to provide humanitarian assistance inside Afghanistan without engaging with the de facto authorities of the country,” he said.

“And I do believe that it is very important to engage with the Taliban at the present moment for all aspects that concern the international community, be it about terrorism, be it about human rights, be it about drugs, be it about the nature of the government,” Guterres said. “Our attitude is to engage.”