Blinken on China: ‘Massive Repressive Action’ Against Protests Anywhere Is ‘Sign of Weakness’ 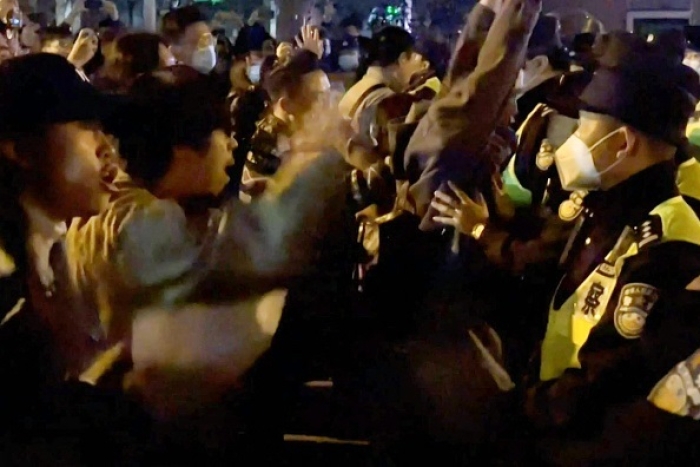 A screengrab from eyewitness video footage shows protestors in Shanghai confronting police at the weekend. (Photo by AFPTV / AFP via Getty Images)

(CNSNews.com) – Repressive government action aimed at stopping peaceful protests in any country is “a sign of weakness,” not strength, Secretary of State Antony Blinken said on Wednesday, in response to a question about China’s crackdown on citizens demonstrating against harsh COVID-19 pandemic measures.

During an interview in Romania, Blinken told NBC News China would have to work out for itself a way forward in dealing deal with COVID-19 “that answers the health needs but also answers the needs of the people.  We can’t address that for them.”

Asked whether the protests have weakened Chinese President Xi Jinping, Blinken replied, “I can’t speak to what this says about his standing.”

Protests began over the weekend in response to a fatal fire in a high-rise apartment block in western China, where reports indicating that lockdown measures had hampered emergency responders sparked anger.

In several major cities, groups took to the streets to protest Xi’s “zero-COVID” policies – which aim to stamp out transmission entirely, even as more infectious variants of the coronavirus spread – and in some cases demonstrators chanting slogans calling on the president to resign.

The state’s response has included arrests and flooding sensitive areas with police, setting up barriers to prevent protests from recurring, and clearing university campuses where protests have taken place. (State media reports say students are being sent home to ensure their safety in the face of virus infections.).

Reports and videos posted on Chinese social media have reportedly been quickly taken down, although some footage has found its way onto international platforms.

Clips on Wednesday from the southern city of Guangzhou showed large numbers of police, wearing helmets, personal protective gear, and carrying shields, moving along a street in a show of force. Yelling protestors could be seen throwing objects at police.

Foreign Ministry spokesman Zhao Lijian told a briefing early this week that those trying to link the apartment fire with COVID-19 measures had “ulterior motives.” At another briefing, he said foreign parties commenting on the protests should “take heed of their own peoples’ voices and interests, instead of pointing fingers at others.”

Transcripts of daily foreign ministry press briefings have been scrubbed of most questions and answers about the situation.

The Chinese Communist Party (CCP) organ Global Times reported Wednesday that a CCP political and legal committee met on Monday, and vowed to “resolutely crack down on infiltration and sabotage activities by hostile forces and illegal and criminal acts that disrupt social order.”

The committee did not refer directly to the protests, and the meeting was characterized as an opportunity to “convey and learn from” decisions taken at the CCP’s national congress in October.

In a report on its own webpage, the CCP committee said: “It is necessary to resolve conflicts and disputes in a timely manner and help solve the practical difficulties of the people.”

WH Reaction to Chants of ‘Xi Jinping, Step Down’: ‘These Protesters Are Speaking For Themselves’ (Nov. 29, 2022)