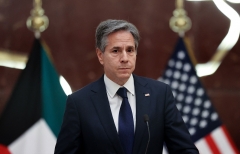 Secretary of State Antony Blinken addresses the media in Kuwait City on Thursday. (Photo by Jonathan Ernst/Pool/AFP via Getty Images)

(CNSNews.com) – It took 13 days for the State Department to condemn the Iranian regime’s violent suppression of recent protests, and President Biden has yet to speak publicly on the matter.

At a press briefing in Kuwait City Thursday, Secretary of State Antony Blinken did not respond when asked about the length of time it had taken the administration to do so.

“Why has it taken nearly two weeks for the administration to speak out about protests that have been going on in Iran over – against the government in the last couple of weeks?” a reporter asked.

Blinken answered another part of the question – about ongoing attempts to negotiate a mutual return of the U.S. and Iran to the nuclear agreement – but did not address the issue about the protests.

"The Iranians have refused to talk directly, but with our European partners, with Russia and China, we’ve been engaged in – as I said, in multiple rounds," Blinken said.

Blinken said the Biden administration is "fully prepared to return to Vienna to continue negotiations, but ...this process cannot and will not go on indefinitely." He ended his response there.

As reported earlier, for the first week-and-a-half after the latest protests erupted on July 15, the State Department’s response was low-key, with no statement issued.

At press briefings, spokesmen did comment when asked about the situation, but rather than condemn the regime’s actions, they “urged” it to support people’s rights to assemble peacefully and express themselves, and they said the U.S. was “closely” watching.

It was only on Wednesday that the department issued a written statement on the situation.

“The Iranian people have a right to voice their frustrations and hold their government accountable, but we have seen disturbing reports that security forces fired on protesters, resulting in multiple deaths,” the statement by spokesman Ned Price read in part.

“We condemn the use of violence against peaceful protestors. We support the rights of Iranians to peacefully assemble and express themselves, without fear of violence and detention by security forces. We are also monitoring reports of internet slowdowns in the region,” it said.

Protests that began on July 15 in Khuzestan province have spread to other parts of the country, including Tehran, with an initial focus on water shortages shifting to broader anti-regime sentiment and calls for freedom.

The regime continues to severely limit Internet connection, in an apparent bid to squash an organizing tool and prevent images and video clips from reaching audiences abroad.

The targeting of the Internet has alarmed advocacy groups: The last time the regime drastically curtailed its use, during protests in November 2019, the crackdown was brutal, with the death toll rising to 1,500 in two weeks.

“It is time for President Joe Biden to speak out publicly in support of the right to peaceful protest in Iran, just as he has done with other countries engaging in severe human rights abuses,” said Hadi Ghaemi, executive director of New York-based advocacy group the Center for Human Rights in Iran.

If countries negotiating with Iran do not prioritize human rights alongside security issues, he said, “there is a grave risk of massive state violence against protesters in Iran, which was hidden from the world’s view by a similar Internet shutdown in November 2019.”

While in Kuwait, Blinken addressed the protests during interviews with two regional television stations, saying the U.S. stands with the Iranian people expressing hopes for freedom, and urges the government not to use violence and repression to silence them.

“Glad to see the State Department has finally spoken out against state security forces violently repressing protests in Iran,” the Center for Human Rights in Iran tweeted. “We should keep the ‘spotlight’ on the protests, especially now that the government is moving to further restrict internet access.”

Iran-born pro-democracy campaigner Mariam Memarsadeghi thanked Price for the statement, but added, “For it not be perfunctory (after two weeks of activists pleading for U.S. action), it must be followed up with regular interventions, including to warn regime of heightened sanctions & penalties for violence on protestors.”

After Blinken’s remarks in Kuwait, Memarsadeghi tweeted, “Very late but good @ABlinken for making clear the U.S. stands with the people of Iran and their democratic aspirations. To actualize this commitment, Iranians plead that you end appeasement and take practical measures to support them.”

The administration’s approach recalls that of the Obama-Biden administration’s similarly tempered initial response to the regime’s crushing of protests following a disputed election in 2009.

Then, President Obama was hoping to draw the regime into talks on nuclear and other issues, having offered shortly beforehand to engage, with calls for “a new beginning” in relations.

Now, Biden is seeking ways for the U.S. and Iran to return to the nuclear deal, from which his predecessor withdrew in 2018.

When the 2009 protests erupted, it took ten days before Obama condemned the crackdown explicitly, calling on Tehran “to stop all violent and unjust actions against its own people.”

The non-partisan Council on Foreign Relations later described Obama’s initial response to the crisis as “muted.”

By contrast, when the late 2019 protests broke out, the Trump White House issued a statement  within two days voicing support for “the Iranian people in their peaceful protests against the regime that is supposed to lead them” and “condemn[ing] the lethal force and severe communications restrictions used against demonstrators.”

Secretary of State Mike Pompeo invited Iranians to submit images and information to enable the U.S. to expose what the regime was doing – thousands did so within days – and President Trump also weighed in on Twitter.