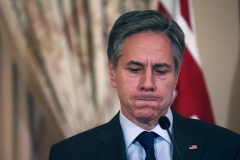 (CNSNews.com) – Secretary of State Antony Blinken responded Tuesday to criticism by the United Nations’ human rights apparatus of “systemic racism” in the United States by announcing plans to issue a formal, standing invitation to dozens of U.N. rights experts to visit and investigate.

“As the president has repeatedly made clear, great nations such as ours do not hide from our shortcomings; they acknowledge them openly and strive to improve with transparency,” he said in a statement.

“In so doing, we not only work to set the standard for national responses to these challenges, we also strengthen our democracy, and give new hope and motivation to human rights defenders across the globe,” Blinken said.

“It is in this context that the United States intends to issue a formal, standing invitation to all U.N. experts who report and advise on thematic human rights issues.”

The holder of the former post, Zambian-born UCLA School of Law professor Tendayi Achiume, told U.S. lawmakers in video testimony earlier this year that the U.S. was “not exempt” from international obligations to eliminate racial discrimination by making reparations for slavery.

The U.N. Human Rights Council in Geneva has established 56 so-called “special procedures” – a combination of working groups, experts and “special rapporteurs” – including 45 with thematic mandates, such as “contemporary forms of racism,” “arbitrary detention” or “the right to food.”

It is to those thematic mandate-holders that Blinken was referring with his offer of a “formal, standing invitation.”

(The other 11 “special procedures” are country-specific, with current mandates including Belarus, North Korea and “Palestinian territories occupied since 1967.”)

On Monday, U.N. High Commissioner for Human Rights Michelle Bachelet presented the HRC with a report, which was commissioned by the council in a resolution adopted last summer, on “systemic racism” in law enforcement targeting “Africans and people of African descent.”

Addressing the council on the report and issues raised in its compilation, Bachelet said countries that have profited from slavery and colonialism must acknowledge the legacies, and make reparations.

On Tuesday, the HRC adopted, without a vote, a resolution on the issue of rights violations by law enforcement against “Africans and people of African descent.”

They will be mandated “to further the agenda towards transformative change for racial justice and equality in the context of law enforcement globally, especially where relating to the legacies of colonialism and the transatlantic slave trade in enslaved Africans, and to contribute to accountability and redress for victims.”

Blinken in his statement welcomed the adoption of the resolution.

“I look forward to engaging with the new mechanism to advance racial justice and equity.”

“Responsible nations must not shrink from scrutiny of their human rights record; rather, they should acknowledge it with the intent to improve,” he continued. “I urge all U.N. member states to join the United States in this effort, and confront the scourge of racism, racial discrimination, and xenophobia. Because when all people – regardless of their race or ethnicity – are free to live up to their full potential, our collective security is strengthened.”

‘A global challenge affecting all regions’

The resolution adopted by the 47-member HRC on Tuesday and praised by Blinken was introduced, on behalf of African states, by Cameroon, one of 12 current council members graded “not free” by Freedom House, based on political rights and civil liberties. (The other 11 are Bahrain, China, Cuba, Eritrea, Gabon, Libya, Russia, Somalia, Sudan, Uzbekistan, and Venezuela’s Maduro regime.)

During the discussion that preceded the adoption of the measure, representatives of China and the Maduro regime directed their criticism largely at the United States.

The Chinese delegate said that “those countries which participated in the enslavement and transatlantic slave trade and engaged in colonialism, or those countries which benefited from such acts, can demonstrate political will, support this important draft resolution, and … show the courage to assume responsibility for historical crimes.”

“The assassination of George Floyd triggered systemic racism and the supremacist nature of the American imperialism,” said the Maduro regime’s representative. “This is the outcome of colonialism and slavery which led to contests across the globe.”

“We express our solidarity with those who are struggling in the U.S. and across the world for equality against racism and capitalist oppression

Britain’s representative said although the U.K. supported most of the content of the resolution, it did not believe “yet another expert mechanism” needed to be created. Rather, existing norms and treaties should be implemented.

Moreover,” the proposals for reparations for colonialism and slavery divert focus from the pressing challenges of tackling contemporary racism and global inequality,” he said. “Contemporary racism is a global challenge affecting all regions.”

Reversing the Trump administration’s 2018 withdrawal from the HRC, the Biden administration early this year announced it was re-engaging with the council, and plans to run for a seat in elections in the fall.