Blinken: Should Russia Be Allowed to Remain a Member of UN Human Rights Council? 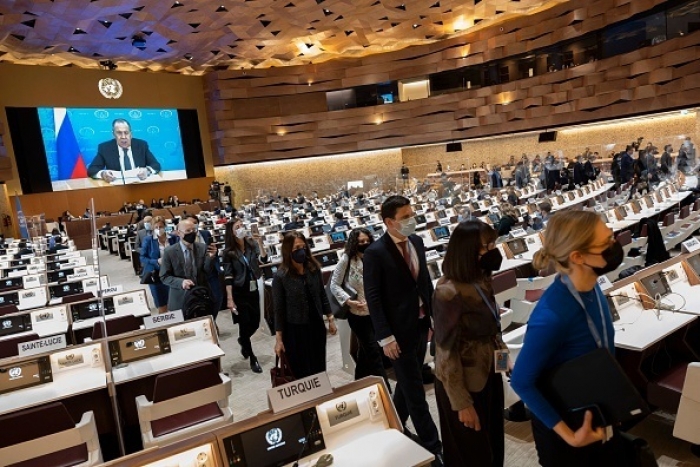 (CNSNews.com) – Meeting under the shadow of the war in Ukraine, the U.N. Human Rights Council on Tuesday heard Secretary of State Antony Blinken question whether Russia should be allowed to remain a member, hours after dozens of diplomats walked out in protest as the Russian foreign minister prepared to speak.

Speaking remotely to the Geneva-based council, which the U.S. rejoined this year, Blinken devoted more than half of his 10-minute statement to Russia’s invasion of its neighbor, condemning its “attempt to topple a democratically elected government, and its gross human rights abuses and violations of international humanitarian law.”

Confronting some of the tendencies that have become characteristic at the U.N.’s top human rights body, Blinken challenged reluctance to call out powerful states and claims that doing so amounts to “politicization” – an argument frequently made by China.

“Council members should stop using language implying that all sides bear equal responsibility for the unprovoked attack of one side,” he said. “This isn’t evenhanded – it’s wrong – and fails to place accountability where it belongs.”

Then he raised what human rights advocates view as one of the HRC’s biggest failings since it was established 16 years ago – the presence in its ranks of rights-abusing regimes.

“One can reasonably ask whether a U.N. member-state that tries to take over another U.N. member-state – while committing horrific human rights abuses and causing massive humanitarian suffering – should be allowed to remain on this council,” Blinken said.

One of the main reasons cited by the Trump administration when it withdrew from the HRC in 2018 was the fact that its members – in the words of President Trump while addressing the U.N. General Assembly the previous year – include “some governments with egregious human rights records.”

Only one member has ever been suspended from the HRC – Muammar Gaddafi’s Libya, 11 years ago to the day – and at the time Russia and China were among those who stressed that the decision should not be seen as a precedent.

Several hours before Blinken spoke it in was the turn of Russian Foreign Minister Sergei Lavrov, whose plan to attend the HRC session in person was stymied after the European Union this week prohibited Russian aircraft from overflying its territory.

Lavrov addressed the council by video, and as he prepared to do so, several dozen diplomats walked out of the chamber in a show of protest.

Such walkouts are not unprecedented; one occurred when Iranian President Mahmoud Ahmadinejad delivered a fiery speech in 2009, although it was considerably smaller than Tuesday’s.

In the lobby, Ukrainian Ambassador Yevheniia Filipenko thanked members for their support, saying it sent “a very strong signal to the Russian Federation that such actions are not acceptable, are not tolerated, in the 21st century.”

Lavov: The EU denied my freedom of movement

Lavrov began his 16-minute statement by complaining that he could not deliver it in person.

The reason he was compelled to address the HRC by video, he said, “is the outrageous measures by the European Union to refuse to respect one of the fundamental human rights, the right to freedom of movement.”

The HRC will later this week hold an “urgent debate” on the Ukraine situation – a full week after Filipenko formally requested it.

HRC seats are filled by the U.N. General Assembly, and it would be that body that would consider suspending a council member, as it did in Libya’s case in 2011.

Some non-governmental organizations accredited to the U.N. and other critics have called for Russia’s expulsion from the HRC.

“Even FIFA, the second most corrupt international organization in Switzerland, has expelled Russia for invading and attacking Ukraine,” U.N. Watch executive director Hillel Neuer tweeted this week. “When will @UN_HRC, the #1 most corrupt international organization in Switzerland, do the same and expel Russia from the human rights council?”

The Geneva-based U.N. Watch, which has campaigned to deny HRC seats to rights-violating regimes, urged U.N. member-states in 2020 not to elect Russia back onto the council.

Humanists International said the upcoming urgent debate on Ukraine should produce a resolution which, among other things, calls on the General Assembly to suspend Russia’s membership of the HRC.

Phil Lynch of the NGO International Service for Human Rights said the envisaged resolution should call on the General Assembly to suspend Russia’s HRC membership “as a result of both its gross and systematic violations and its manifest breach of the U.N. Charter and non-cooperation with U.N. mechanisms.”

The World Organization Against Torture also called on U.N. member-states to consider suspending Russia from the HRC.

“It would be inconceivable that a state that has invaded a sovereign neighbor and denies its very right to exist should continue to serve in the world’s primary human rights body,” it said.

Former U.S. Ambassador to the U.N. Nikki Haley, who led the previous administration’s exit from the HRC in 2018, wrote in a recent op-ed, “America now sits alongside Russia on the United Nations Human Rights Council. How is that possible?”

“We should demand Russia’s expulsion from any council dedicated to human rights or withdraw from it ourselves if Russia can’t be removed,” she said.