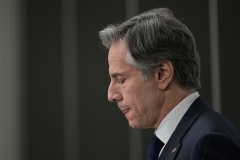 Secretary of State Antony Blinken speaks to the media in Stockholm, Sweden on Thursday. (Photo by Jonathan Nackstrand/ Pool /AFP via Getty Images)

(CNSNews.com) – Secretary of State Antony Blinken on Thursday sounded his most pessimistic note to date about the likelihood of reaching an agreement to bring Iran and the U.S. back into the 2015 nuclear deal, a Biden administration foreign policy priority.

“In the next day or so, will be in a position to judge whether Iran actually intends now to engage in good faith,” Blinken told reporters in Stockholm, referring to talks underway in Vienna this week aimed at getting the Joint Comprehensive Plan of Action (JCPOA) back on track.

“I have to tell you, recent moves, recent rhetoric don’t give us a lot of cause for optimism,” he said.

Blinken did add that it was not too late for Iran to reverse course, but said, “what Iran can’t do is sustain the status quo of building their nuclear program while dragging their feet on talks. That will not happen.”

Blinken was talking shortly after speaking by phone to Israeli Prime Minister Naftali Bennett, whose government views a prospective nuclear-armed Iran as a potentially existential threat.

Bennett’s office said the prime minister had called for an immediate cessation of the JCPOA talks in Vienna.

Bennett accused Iran of using “nuclear blackmail” as a tactic, and urged the “major powers” to take “concrete steps” against the regime.

The “nuclear blackmail” allegation arose from the International Atomic Energy Agency (IAEA) disclosure this week that the Iranians had recently begun to enrich uranium to 20 percent purity, using advanced “IR-6” centrifuges at the regime’s underground uranium enrichment plant at Fordow.

That development constitutes yet further violations of the JCPOA, which prohibited enrichment at Fordow, prohibited the use of IR-6 centrifuges – Iran was limited to operating older and slower IR-1 centrifuges – and prohibited uranium enrichment to anything above 3.67 percent purity.

Iran began violating its commitments after President Trump in 2018 withdrew from the Obama-era JCPOA and restored sanctions as part of a campaign of “maximum pressure” against the world’s leading state-sponsor of terrorism.

President Biden wants to return to the deal, which would require a lifting of the sanctions by the U.S. and a return to compliance by Tehran.

In his remarks in Stockholm, Blinken said the U.S. and Israel “have exactly the same strategic objectives: we are both determined to ensure that Iran does not acquire a nuclear weapon.”

Asked about Bennett’s call for an immediate end to the talks, Blinken repeated the point that “we’re going to know very, very quickly – I think in the next day or two – whether Iran is serious or not. We need to test that proposition fully.”

The other parties involved in the European Union-convened talks with the Iranians are Britain, France, Germany, Russia, and China.

Blinken said the European allies “clearly” shared the U.S. position on the matter. And having met with Russian Foreign Minister Sergei Lavrov in the Swedish capital earlier in the day, he said he thought that “Russia shares our basic perspective on this” too.

“And we’ll see what happens over the next couple of days. But it is up to Iran to demonstrate and to demonstrate quickly, that it is serious about taking the steps necessary to return to compliance [with the JCPOA], not to try to drag things out while building up.”

Iran’s foreign ministry has accused Israel of trying to “poison” the talks in Vienna, but also scoffed at the chances of its intervention having any effect.

Foreign Minister Hossein Amirabdollahian reiterated that the “fundamental priority” for Iran in Vienna was the removal of sanctions, adding that a good deal was in reach “if the West shows goodwill.”

Non-proliferation expert Andrea Stricker, a research fellow at the Foundation for Defense of Democracies, said the Biden administration “misunderstood the goal of the new Iranian government [that took office after elections in June]: to continue operating the nuclear program while at the same time receiving massive sanctions easing.”

A temporary nuclear agreement in return for major sanctions easing was not the way to get the regime to change its behavior, she told Germany’s Bild.

The chief of Israel’s Mossad intelligence agency pledged on Thursday that the Iranian regime will never possess nuclear weapons.

“Iran will not have nuclear weapons – not in the coming years, not ever. That’s my promise, that is Mossad’s promise,” David Barnea said at an award ceremony.

He said a bad deal reached with Iran would be “intolerable.”

“Iran is striving for regional hegemony, wages terrorism that we are blocking every day around the world, and is continuously threatening stability in the Middle East,” Barnea said.

“Our eyes are open, we are prepared, and we will do with our partners in the security establishment everything that is necessary to alleviate the threat against Israel and thwart it by any means.”

Iranian officials and state media have accused Israeli intelligence of being behind numerous acts of sabotage targeting nuclear facilities – including the destruction last April of a centrifuge chamber at the Natanz nuclear plant – as well as the assassination of nuclear weapons scientists.

Natanz, a facility key to the nuclear program, has been targeted a number of times, including in damaging cyber attacks.

Iran has long insisted its nuclear program is peaceful, but the international community’s suspicions that it was a cover for developing a weapons capability led to the negotiations that produced the JCPOA, which set some curbs on nuclear activities in return for sanctions relief.