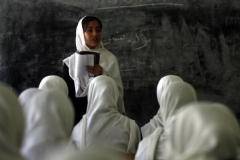 An Afghan schoolgirl reads a poem to her classmates at a school for girls in Kabul in 2010. During its brutal 1996-2001 rule the Taliban banned female education and most work outside of the home. (Photo by Patrick Baz/AFP via Getty Images)

(CNSNews.com) – Secretary of State Antony Blinken said on Sunday that the Taliban will have to respect the rights of women and girls in a future Afghanistan if it has any hopes of winning international acceptance and “not being treated as a pariah.”

He was responding to deep concerns that the withdrawal of U.S. and coalition troops from Afghanistan could see a serious backsliding of the significant gains made by women and girls in the country as a resurgent Taliban asserts its authority in ways none can now predict.

“If the Taliban has any expectation of getting any international acceptance, of not being treated as a pariah, it’s going to have to respect the rights of women and girls,” Blinken told ABC News’ “This Week.”

When the fundamentalist militia ruled most of Afghanistan in the closing years of the last century, it enforced a harsh interpretation of Islamic law. The U.S. government at the time recorded that restrictions on the lives of Afghan women were “widespread, institutionally sanctioned, and systematic,” with some of them “subjected to rape, kidnapping, and forced marriage.”

Since the “emirate” was toppled in late 2001, changes have been dramatic, with girls’ enrollment in public schools rising from zero that year, to more than three million within nine years. Women today serve as mayors, district governors, judges, lawyers, university professors, journalists, and health professionals.

Exactly what the Taliban envisions for a future Afghanistan remains the subject of debate and speculation, but its own documents and statements suggest that it’s not any form of democracy.

“Democracy must not be put forth as an infallible solution to all problems,” it said in an April 11 commentary, arguing that all past attempts to install “non-Islamic forms of governance” in Afghanistan have been unsuccessful.

“[W]hy must a system with foreign roots be forcefully implemented in Afghanistan when Afghans possess a superior model of governance?”

“Everything from politics, economics, culture and education to social life must be follow our religious values,” it said in an article two days later. “This is because Afghans do not desire the elimination of military aggression alone, but also the termination of western political, cultural and ideological invasion.”

And on Sunday the Taliban shared the news that during the month of March, its “Preaching, Guidance and Recruitment Commission” had succeeded in persuading 1,062 Afghans to leave their governments posts in Kabul and join its ranks, some of them bringing with them weapons and other types of military equipment.

“The countrymen who joined the mujahideen [Islamic holy warriors] vowed to break all ties with the foreign and internal enemies of Islam and homeland and strengthen our people and mujahideen in order to cleanse the country from occupation and corruption and establish a pure Islamic government acceptable to all Afghans,” it declared.

‘Progress that threatens the Taliban’s agenda’

In a recent report, the Congress-established Afghanistan Study Group outlined some of the achievements made by Afghan women and civil society in general since the 2001 and said that “[t]he future of these rights and freedoms are of major concern as Afghans who appreciate them wonder if the Taliban have evolved in their views.”

“The alarming spike in targeted assassinations at the end of 2020 against young Afghan journalists, civil servants, and activists is disheartening but not surprising,” it said. “Their work exemplifies precisely the kind of progress that threatens the Taliban’s agenda.”

The Afghanistan Study Group report did say, however, that the Taliban since 2018 has softened in public its insistence on “a regime run by a single leader chosen on the basis of his Islamic credentials with strict implementation of Islamic law as interpreted by associated religious scholars.”

And it quoted one interlocutor as telling the group that the Taliban does not want to be “the North Korea of Central Asia.”

The issue of Afghan women and girls also came up during a Fox News Sunday appearance by National Security Advisor Jake Sullivan.

“We have trained and equipped 300,000 Afghan forces to defend their country and their people,” Sullivan added.

Last week a senior administration official, giving a background briefing on Biden’s Afghanistan decision, said that, post-withdrawal, the U.S. “will use its full diplomatic, humanitarian, and economic toolkit to try to – as best we can – to protect the gains made by women and girls over the course of the past 20 years.”

“We’re going to make clear to any nation, any government, any party that wants to participate in a government that if they want international legitimacy or connection to the rest of the world and does not want to be deemed a pariah state, then they must not interfere with the progress that has been made to advance human rights, including for women, girls, and minorities in Afghanistan,” the official said.