Blinken: Trio Found Guilty in Deadly Downing of Plane Over Ukraine Must Be ‘Held to Account 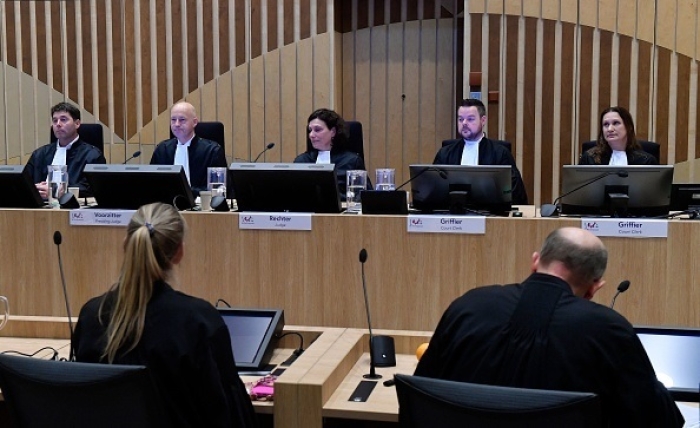 The special court near Amsterdam prepares to deliver its verdict in the Flight MH 17 downing case, on Thursday. (Photo by John Thys / AFP via Getty Images)

(CNSNews.com) – Secretary of State Antony Blinken on Thursday welcomed a Dutch court’s verdict finding two Russians and a pro-Russian Ukrainian guilty of murder for their role in the July 2014 shoot-down of a passenger plane over eastern Ukraine, and called for the three – who remain at large – to be “held to account.”

The special court, located near Schiphol Airport in Amsterdam, handed down life sentences to the three men, senior military officials in the self-proclaimed Donetsk People’s Republic (DPR), for their roles in the downing of Malaysia Airlines flight MH17, and the deaths of all 298 passengers and crew.

The court noted that, since at least two months prior to the incident, the DPR “in fact took directions from the Russian Federation.”

One of the men found guilty and sentenced in absentia was Igor Girkin (aka Strelkov), a Russian nationalist and retired FSB officer who held the post of DPR “defense minister.” According to Russian media accounts, Girkin has again been “volunteering in the war zone in Ukraine” in recent months.

Flight MH17, a scheduled service from Schiphol to Kuala Lumpur, was shot down on July 17, 2014 by a Russian BUK surface-to-air missile system. Among the victims were 196 Dutch citizens, 44 Malaysians, 39 Australians, 12 Indonesians and 10 Britons. A 19-year-old American-Dutch dual national was among the dead.

A joint investigation team comprising representatives from Australia, Belgium, Malaysia, the Netherlands and Ukraine found in 2016 that the plane had been downed by a Russian BUK missile and that the launcher had been taken across the border into Ukraine from Russia, and then returned after the incident.

The investigators named the suspects in 2019, and the trial began the following year under a panel of five judges.

Four days after the tragedy, the U.N. Security Council unanimously adopted a resolution saying that those found to be responsible must “be held to account and that all states cooperate fully with efforts to establish accountability.”

A year later, however, Russia vetoed a follow-up resolution that would have created an international tribunal to prosecute and punish those found responsible. (China, Venezuela and Angola abstained.)

In a statement welcoming Thursday’s verdict, Blinken pointed to the 2014 resolution, saying that while the court decision was “a solid step towards justice, more work lies ahead to meet the U.N. Security Council’s demand in resolution 2166 that ‘those responsible … be held to account.’” 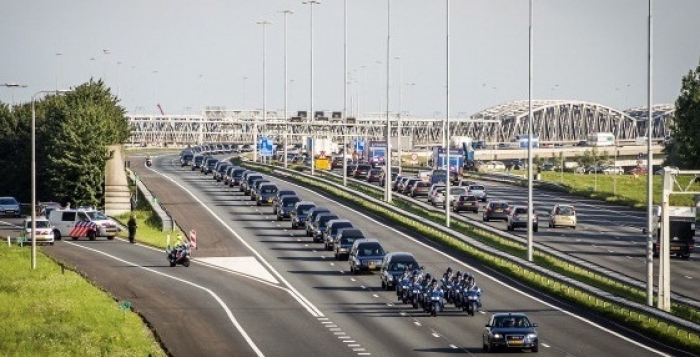 A convoy of hearses carrying the remains of victims of Malaysia Airlines flight MH-17 heads for a military base in the Netherlands for identification on July 23, 2014, six days after the plane was shot down over eastern Ukraine. All 298 passengers and crew were killed. (Photo by Remko de Waal / AFP via Getty Images)

The Russian constitution prohibits extradition, so the chances of the guilty men ever serving their sentences are remote. It is also uncertain how the families of the victims will pursue the court-awarded damages “exceeding 16 million euros” ($16.57 million).

Russia has throughout denied any involvement in or responsibility for the downing of the Boeing 777 and has also been highly critical of the investigation.

The foreign ministry in Moscow said in response to the verdict that the court had “neglected the principles of impartial justice in favor of the current political situation, thereby inflicting a serious blow to the reputation of the entire judicial system of the Netherlands.”

It said the trial “has every chance of becoming one of the most scandalous in the history of legal proceedings with its extensive list of oddities, inconsistencies and dubious arguments of the prosecution, which nevertheless formed the basis of the verdict.”

In a 2020 interview, Girkin told The Times of London that as he was commander of the Russian-backed separatist forces he felt “a moral responsibility” for the deaths of the passengers and crew, but he insisted that forces under his command “did not bring down the plane.”

“When asked if his statement could be construed as an admission that the Russian military was to blame, Girkin said: ‘People can interpret this as they like.’ He declined to comment further,” The Times reported.

See also:State Dep’t to Russia After Aircraft Shoot Down Findings: Stop Lying and Account For Your Role (May 25, 2018)