(CNSNews.com) – The Biden administration is continuing to seek a diplomatic solution to the Iran nuclear deal dispute but, with the European parties to the agreement warning that time is running out, the U.S. is “actively engaging with allies and partners on alternatives,” Secretary of State Antony Blinken said on Tuesday.

“We continue, in this hour, on this day, to pursue diplomacy because it remains, at this moment, the best option,” Blinken said during a visit to Indonesia.

“But we are actively engaging with allies and partners on alternatives.”

He did not elaborate, but the Israeli government – which regards a nuclear-armed Iran as a potentially existential threat – has been urging its allies to take “concrete steps” against the regime in Tehran, while hinting strongly that a military option is on the table if diplomacy fails.

Between April and June, six rounds of talks were held in Vienna designed to bring the U.S. and Iran back into compliance with the 2015 nuclear accord known as the Joint Comprehensive Plan of Action (JCPOA).

After the U.S.-sanctioned hardline cleric Ebrahim Raisi was elected as Iran’s president, the process stalled for five months, and when they resumed the Iranian delegation took an even more rigid stance than earlier.

Blinken’s remarks in Jakarta were in response to a question about a pessimistic assessment by the three European parties to the JCPOA – Britain, France, and Germany, known collectively as the E3. (The remaining parties to the accord are Russia and China.)

Earlier in the day, the European trio’s U.N. ambassadors in New York said in a statement that attempts to salvage the JCPOA were “rapidly reaching the end of the road.”

“Iran has walked back hard-fought compromises reached after many weeks of challenging negotiations, while at the same time presenting additional maximalist demands,” they said. “We are nearing the point where Iran’s escalation of its nuclear program will have completely hollowed out the JCPOA.”

The E3 ambassadors said the door for Iran to do a deal “now” remained open.

“Iran has to choose between the collapse of the JCPOA and a fair and comprehensive deal, for the benefit of the Iranian people and nation,” they said. “Iran’s continued nuclear escalation means that we are rapidly reaching the end of the road.”

Summarizing the statement of Britain, Germany, and France, Blinken said, “It said very clearly time is running out, that Iran has still not engaged in real negotiations. Unless there is swift progress, the E3 said, the Iran nuclear agreement will become an empty shell. And what we’ve seen so far is Iran losing precious time by advancing totally new positions that are inconsistent with a return to the JCPOA.” 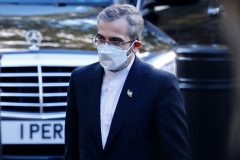 There was no immediate reaction from Tehran to the E3 statement, but the regime’s nuclear negotiator in Vienna, Ali Bagheri Kani, tweeted, “Some actors persist in their blame game habit, instead of real diplomacy.”

“We proposed our ideas early, & worked constructively & flexibly to narrow gaps; diplomacy is a 2 way street. If there’s real will to remedy the culprit’s wrongdoing, way for quick good deal will be paved.”

The “culprit” in the regime’s view is the United States, which under President Trump withdrew from the JCPOA in 2018 and restored sanctions that had been lifted under the Obama-era deal.

After Trump’s 2018 withdrawal, the regime began to violate its commitments, breaching restrictions on uranium enrichment, exceeding both the quantity and levels of purity permitted under the deal.

Tehran is demanding that the U.S. immediately lift all sanctions, while the U.S. position is that it will remove those sanctions that are “inconsistent” with the JCPOA, but only when Iran returns to compliance.