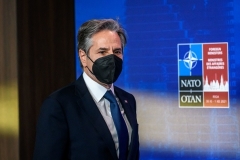 (CNSNews.com) – The U.S. and its allies will raise a series of malign Russian actions during interactions in the coming weeks, ranging from invading neighboring territory to poisoning opponents on foreign soil, Secretary of State Antony Blinken said on Wednesday.

It was “imperative” that the Russians listen, he said, even as the West will listen to Moscow’s concerns.

Three sets of meetings in Europe next week will bring together Americans, Russians, and Europeans for talks focused on Russia and European security, at a time when the West is apprehensively watching a Russian troop buildup near Ukraine’s borders, and President Vladimir Putin is pressing for far-reaching concessions from NATO.

Russia’s foreign ministry last month issued a set of written demands for security guarantees from the West, and the Kremlin has warned that continuing to ignore its security concerns could lead to a “military-technical” response.

Taking the form of two draft agreements – one between the U.S. and Russia, the other between Russia and NATO – the documents call among other things for no further expansion of NATO, and no deploying of weaponry and holding of drills near Russia’s borders.

During a joint press appearance with his visiting German counterpart Annalena Baerbock, Blinken was asked whether the U.S. would go into next week’s meetings with a set of “specific counterproposals.”

Blinken acknowledged that Russia has laid out issues for discussion.

“Over the past two decades, it is Russia that has invaded neighboring countries, interfered in other countries’ elections, used chemical weapons to attempt to assassinate opponents of the government and done so on foreign soil, violated international arms control agreements, pulled back from confidence-building and transparency measures, long agreed.”

“And so we and our allies will absolutely be raising these and other issues with Russia in the days and weeks ahead,” Blinken continued.

“Russia has concerns. We will listen. We have concerns, and it’s imperative that Russia listen.”

The Kremlin’s desire to stop any further expansion of NATO is focused in particular on Ukraine and Georgia, countries with deep historical ties to Russia but which almost two decades ago began seeking a path to membership in the transatlantic alliance.

Moscow’s turbulent relations with the two former Soviet states over that period have been closely linked to those aspirations.

Russian forces invaded Georgia in 2008, purportedly to protect pro-Russian separatists in South Ossetia and Abkhazia after Georgia’s government tried to rein them in. After a brief war, Russia recognized the two breakaway regions as independent countries, costing Georgia one-fifth of its territory. 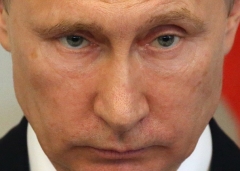 Russia in 2014 annexed Ukraine’s Crimea, after engineering a referendum in which 97 percent of voters supported joining the Russian Federation. Most of the international community did not recognize the referendum, and the U.S. and its allies do not recognize Russian sovereignty over the strategic peninsula.

That same year Russia began supporting a pro-Russian uprising in Ukraine’s eastern Donbass region. Since then the conflict has claimed more than 13,000 lives and displaced more than 1.4 million people, according to the U.N.

As alluded to by Blinken, Russian troops have been deployed for decades in Moldova’s Transnistria region, which broke away from the former Soviet republic in the early 1990s. Moldovan leaders and international organizations have called numerous times for their withdrawal, to no avail.

In addition to military intervention in neighboring countries, Blinken referred Wednesday to Russia’s use of chemical weapons in attempts to assassinate opponents, including on foreign soil.

The alleged plots – denied by the Kremlin – include the unsuccessful attempt to kill former spy Sergei Skripal in England in 2018, and the attempt in 2020 to assassinate Putin critic Alexei Navalny – evidently using the same military-grade nerve agent used to target Skripal – in eastern Russia.

In 2006, Russian former intelligence officer Alexander Litvinenko died in London after being poisoned with radioactive polonium. A British inquiry later concluded that Putin had “probably” approved the assassination.

Blinken in his remarks on Wednesday also cited Russian interference in other countries’ elections, violations of arms control agreements, and a pulling back from long agreed-upon confidence-building measures.