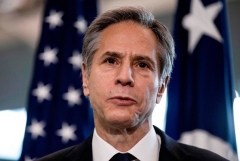 (CNSNews.com) – Secretary of State Antony Blinken informed the U.N. Human Rights Council on Wednesday that the U.S. will run for a seat in the fall and work to improve the body’s membership, saying that the worst rights-violating regimes “should not be members.”

“We will focus on ensuring that the council membership reflects high standards for upholding human rights,” Blinken told the Geneva-based HRC in a message delivered remotely.

“Those with the worst human rights records should not be members of this council.”

The administration’s confirmation that it will seek membership for a three-year term beginning next January was celebrated by advocates of multilateral engagement. “When we forfeited our seat on the council, it only empowered countries like China, Venezuela, and Russia, and they took clear advantage of our absence,” Better World Campaign president Peter Yeo said earlier.

But the history of the 15-year-old body suggests that the return of the U.S. will have little effect on its most glaring weakness – the absence of enforceable criteria for membership that has allowed rights-violating regimes to join, and work to subvert its noble goals from within.

The features that have enabled autocracies to obtain seats on the HRC were built into the system when it was established in 2006, and three consecutive U.S. administrations’ efforts to press for changes to improve membership have been stymied.

After failing to get meaningful reforms inserted into its founding resolution, the Bush administration chose to shun the council; the Obama administration joined and engaged with the HRC, but failed in its efforts to improve it; and the Trump administration, after failing in its attempts to reform it, withdrew in 2018.

When it did so, then-Ambassador to the U.N. Nikki Haley noted that “human rights abusers continue to serve on and be elected to the council. The world’s most inhumane regimes continue to escape scrutiny. And the council continues politicizing and scapegoating of countries with positive human rights records – in an attempt to distract from the abusers in their ranks.”

The other major U.S. criticism of the HRC since the outset has been its treatment of Israel, the only country out of 193 U.N. member-states, to be targeted in a country-specific permanent agenda item.

“We need to eliminate Agenda Item 7 and treat the human rights situation in Israel and the Palestinian Territories the same way as this body handles any other country,” Blinken said in his message on Wednesday.

The existence of the permanent agenda item means Israel attracts condemnatory attention at almost every council session, and has also been the target of more HRC resolutions than any other country, by far.

Of the total 240 resolutions adopted by the HRC since its creation in 2006 that deal specifically with a particular country (excluding those that deal with “technical support/capacity building”), more than 80 have targeted Israel alone. The next three countries drawing the most attention have been Syria (35 resolutions), Burma (24 resolutions) and North Korea (13 resolutions).

Not one resolution over the 15 years has criticized the human rights records of China, Russia, Cuba, or many other countries with poor records.

Those three countries have also been members of the HRC for most of its existence, and occupy seats on the current council. Other current members include Uzbekistan, Bahrain, Cameroon, Eritrea, Gabon, Libya, Somalia, Sudan, and the Maduro regime in Venezuela.

Blinken in his statement raised concerns about some of those countries.

“We will continue to call out abuses in places like Venezuela, Nicaragua, Cuba, and Iran,” he said. “We reiterate our call for the Russian government to immediately and unconditionally release Alexei Navalny, as well as hundreds of other Russian citizens wrongfully detained for exercising their rights.”

“We will speak out for universal values when atrocities are committed in Xinjiang [in China] or when fundamental freedoms are undermined in Hong Kong.”

Blinken also referred to “the backsliding of democracy in Burma” and the need to address “human rights violations in Syria and North Korea, the lack of accountability for past atrocities in Sri Lanka, and the need for further investigation into the situation in South Sudan.”

Using their “right of reply” later, the representatives of some of the regimes named by Blinken hit back.

--China accused the U.S. (and several others) of continuing to “fabricate and spread lies about Xinjiang, Tibet and Hong Kong.”

--Cuba’s delegate said U.S. representatives claim that they are “back” but continue to use the HRC to air “aggressive rhetoric against countries who don’t submit to them.”

--Iran called the U.S. “the leading proliferator of terrorism” and sanctions.

--North Korea slammed the remarks as “arrogant,” and accused the U.S. of working to overthrow the regime: “In fact the United States with its worst human rights in the world is not in the position to talk about others’ human rights.”