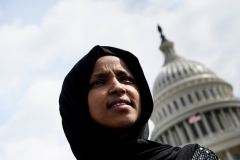 (CNSNews.com) – The Council on American-Islamic Relations (CAIR) says it’s been calling for the government to appoint a special envoy to monitor and combat “Islamophobia” for two decades, but with President Biden in office and lawmakers led by Rep. Ilhan Omar (D-Minn.) promoting the issue, it is hopeful of success.

Omar and Rep. Jan Schakowsky (D-Ill.) sent a letter to Secretary of State Antony Blinken on Wednesday, urging him to create a special envoy, and asking him to “specifically include anti-Muslim violence per se” in the State Department’s next annual human rights report.

Omar offered some examples of the behavior she has been confronted with, ranging from having chewing gum stuck onto her hijab at school to telephonic insults and threats received by her office in Congress.

“So I feel this pain on a deeply personal level,” she said. “But I know that the discrimination many Muslims experience is not unique to the United States. It is a global phenomenon.”

Omar referred to a U.N. human rights expert’s testimony to the Human Rights Council earlier this year to the effect that “institutional suspicion of Muslims and those perceived to be Muslim has escalated to epidemic proportions.”

“Thankfully, we have an administration that takes this issue seriously. President Biden reversed the hateful Muslim ban on day one, and made it clear that Muslims are part of the fabric of this country,” she said. “But we must go further.”

Omar said she would also be introducing legislation that would give the envisaged envoy “the force of law.”

CAIR, which describes itself as the nation’s biggest Muslim civil rights and advocacy group, released a report on “anti-Muslim bias incidents” recorded during the first half of 2021.

They include incidents targeting mosques, school bullying, discrimination, hate speech, and incidents of physical assault. CAIR said it documented a rise in incidents “during the Israeli war on Gaza in May.” 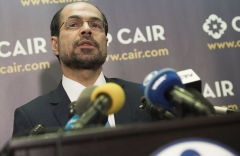 “We have been calling for this creation of this [special envoy] office for the past 20 years,” Awad said during the press conference. “We asked for the Bush administration to do it.”

“I’m so glad and hopeful that this might happen, under the leadership of Joe Biden, and with the efforts and support of members of Congress like the ones that we have here.”

The Omar-Schakowsky letter to Blinken, signed by another 23 House Democrats, said recent years had seen “a dramatic increase in violent Islamophobia and the persecution of Muslims manifesting itself around the world.”

“It is past time for the United States to stand firmly in favor of religious freedom for all, and to give the global problem of Islamophobia the attention and prioritization it deserves.”

The “Muslim ban” cited by Omar referred to President Trump’s executive actions that prohibited certain categories of visitors from 13 countries, eight of which have Muslim majorities. (The bloc of Islamic nations has 57 members.)

Six of the eight Muslim-majority countries named in Trump’s orders – Iran, Libya, Somalia, Sudan, Syria and Yemen – were identified as terrorism “countries of concern” by the Obama administration in 2016.

The new push for an Islamophobia-focused special envoy comes 15 years after the appointment of the State Department’s first special envoy to monitor and combat anti-Semitism, a post created two years earlier by the Global Anti-Semitism Review Act of 2004.

Last December Congress passed legislation upgrading the special envoy position to the rank of ambassador-at-large, reporting directly to the secretary of state. Trump signed it into law in mid-January.

Biden has yet to nominate a person to the post, although a White House official said this week that would happen soon.

Recorded anti-Semitic incidents in the U.S. surged during the 11-day war between the Israeli military and rocket-firing terrorists in Gaza in May.