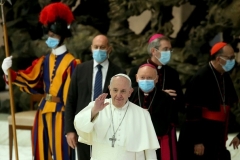 Pope Francis at the Vatican on Wednesday. (Photo by Franco Origlia/Getty Images)

(CNSNews.com) – Remarks by Pope Francis defending civil unions for same-sex couples sent shock waves around the Catholic world on Wednesday, with voices on either side of the debate calling on the Vatican to clarify exactly what they mean.

“Homosexuals have a right to be a part of the family,” Pope Francis said in a documentary that premiered Wednesday at the Rome Film Festival. “They’re children of God and have a right to a family.”

Speaking in Spanish, his native language, he continued, “Nobody should be thrown out or be made miserable because of it. What we have to create is a civil union law. That way they are legally covered.”

Catholics on both sides of the divide over the sanctity of marriage and same-sex rights acknowledged that the pontiff’s comments do not constitute a change in church teaching on homosexuality. The Catechism of the Catholic Church declares unequivocally that homosexual acts are “contrary to natural law,” noting that the Bible “presents homosexual acts as acts of grave depravity.”

A June 2003 document from the Vatican’s Offices of the Congregation for the Doctrine of the Faith – signed by the cardinal who would become Pope Benedict XVI less than two years later – states that, “The Church teaches that respect for homosexual persons cannot lead in any way to approval of homosexual behaviour or to legal recognition of homosexual unions.”

And in a 2010 letter the pope himself, the then-Cardinal Jorge Bergoglio of Buenos Aires, called the push to legalize same-sex marriage in Argentina “a ‘move’ of the father of lies who wishes to confuse and deceive the children of God.”

Conservative Catholic leaders called for clarity from the Vatican.

“The Holy Father’s apparent support for the recognition of civil unions for same-sex couples needs to be clarified,” Bishop Thomas Tobin of Providence, R.I. said in a statement.

“The Pope’s statement clearly contradicts what has been the long-standing teaching of the Church about same-sex unions. The Church cannot support the acceptance of objectively immoral relationships,” Tobin said. “Individuals with same-sex attraction are beloved children of God and must have their personal human rights and civil rights recognized and protected by law. However, the legalization of their civil unions, which seek to simulate holy matrimony, is not admissible.”

Catholic League president Bill Donohue said the pope’s remarks appear to be “one more instance where he is trying to reach out to homosexuals, letting them know that their sexual status does not disqualify them from God’s love.”

“It would be helpful for the Vatican to clarify what the pope meant,” he said. “The content of his remarks is not problematic, but the lack of context is. The laity need clarity, not confusion.”

Donohue also noted that the Holy See press office, in a press release about the documentary, was silent on the comments relating to homosexuality.

“Is it because what he said does not change Church doctrine? Or is it because they want to avoid controversy? The former is true and the latter may also be.”

The press office release focuses on other subjects raised during the two-hour film entitled “Francesco,” including the coronavirus pandemic, racism, sexual abuse, conflicts in Syria and Ukraine, and the persecution of Rohingya Muslims in Burma.

In Arizona, Bishop of Tucson Edward Weisenburger stressed that the pope “has not suggested any change to the Catholic Church’s teaching that marriage is a relationship exclusively between a man and a woman, open to the possibility of procreation, and whereby the parties support and encourage one another in their development as human beings and as children of God.”

“If the Holy Father were addressing a formal teaching of the Church then it is probable that he would have made use of a written format, such as an Encyclical or a motu proprio,” Weisenburger said, referring to a papal edict. “Again, as his statements reflect no change in Church dogma or teaching I do not view his statement as within the paradigm of either personal belief or representing the entire Church.”

But New Ways Ministry, which “educates and advocates for justice and equality for lesbian, gay, bisexual, and transgender Catholics, and reconciliation within the larger church and civil communities,” called the pope’s comments “historic.”

“It signals that the church is continuing to develop more positively its approach to LGBTQ issues,” said the organization’s executive director, Francis DeBernardo.

“At the same time, we urge Pope Francis to apply the same kind of reasoning to recognize and bless these same unions of love and support within the Catholic Church, too. Since the pope framed his support for civil unions by saying that same-gender couples are ‘right to be a part of the family,’ it would not be a long stretch for him to do so.”

Dignity USA (“Celebrating the wholeness and holiness of LGBTQI Catholics”) said it was “cautiously optimistic about this development, while acknowledging that we are very early in the story.”

“We are anxious to see the full film, the context in which Pope Francis made these comments, and whether the Vatican will make further comment on this story,” it said in a statement.

“We hope that Pope Francis will take steps to enshrine support for same-sex couples, LGBTQI individuals, and our families in official Catholic teachings and will work to formally end Catholic teachings that are hurtful to LGBTQI people,” said executive director Marianne Duddy-Burke, citing the language in the Catechism.

According to the Vatican the documentary, by Russian-born director Evgeny Afineevsky, will have its U.S. premier on Sunday at the Savannah Film Festival. The event is usually held in Georgia but this year is an all-virtual affair.