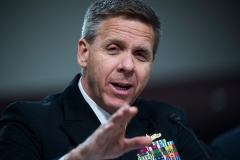 (CNSNews.com) – Ahead of the first substantive talks between U.S. and Chinese officials since President Biden took office, Beijing has slapped down a senior U.S. commander’s warnings about the military threat posed by China.

After U.S. Indo-Pacific Command Commander Admiral Philip Davidson told a Senate panel that China’s threat to Taiwan could become “manifest during this decade, in fact, in the next six years,” Chinese foreign ministry spokesman Zhao Lijian accused some in the U.S. of hyping the issue of Taiwan to justify increased U.S. military spending and interference in the region.

“By exploiting the Taiwan question to exaggerate China’s military threat, some people in the United States are actually looking for excuses to justify the increase of the U.S. military expenditure, expansion of its military power, and interference in regional affairs,” Zhao said.

“The United States should abandon the Cold War zero-sum mentality, view China’s development and national defense development objectively and rationally, and do more things that are conducive to mutual trust between China and the United States and regional peace and stability.”

Testifying before the Senate Armed Services Committee on Tuesday, Davidson called China “the greatest long-term strategic threat to security in the 21st century.”

“I worry that they’re accelerating their ambitions to supplant the United States and our leadership role in the rules-based international order, which they’ve long said that they want to do that by 2050,” he said.

“I’m worried about them moving that target closer,” Davidson said. “Taiwan is clearly one of their ambitions before then, and I think the threat is manifest during this decade, in fact in the next six years.”

In 2027 – six years’ time – China will mark the 100th anniversary of the founding of the People’s Liberation Army (PLA).

Addressing a PLA delegation at the National People’s Congress in Beijing on Tuesday, President Xi Jinping said development of the armed forces during the 2021-2025 period must focus on combat readiness. He also referring to “instabilities” and “uncertainties” facing China in the security realm.

China views Taiwan as a renegade province that must be reincorporated into “one China,” by force if necessary. The U.S. is committed under the Taiwan Relations Act to protect the island democracy from unprovoked aggression and to provide it with military assistance.

Davidson also highlighted the threat China poses to Guam, a U.S. territory that is home to 170,000 American citizens and 21,000 military and Department of Defense personnel, plus their families.

He drew attention to the fact the PLA has produced a propaganda video illustrating Chinese bombers attacking the Andersen Air Force Base on the island.

“Guam is a target today,” he said. “It needs to be defended and it needs to be prepared for the threats that will come in the future. Because it’s clear to me that Guam is not just a place that we believe that we can fight from, as we have for many decades. We are going to have to fight for it, in order to be able to do that.”

White House press secretary Jen Psaki said Wednesday the meeting in Anchorage would be “an opportunity to address a wide range of issues, including ones where we have deep disagreements.”

“We intend to discuss our expectations, and will be frank in explaining Beijing’s actions and behavior challenge to the security, prosperity – and our concerns about challenges they pose to the security and values of the United States and our allies and partners,” she said.

Blinken told the House Foreign Affairs Committee on Wednesday that next week’s meeting did not mark a return to previous administrations’ regular high-level dialogue with China. He said if that type of engagement was to resume, it would “really have to be based on the proposition that we are seeing tangible progress and tangible outcomes on the issues of concern to us with China.”