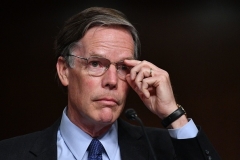 Nicholas Burns testifies at his Senate Foreign Relations Committee confirmation hearing on his nomination to be ambassador to China. (Photo by Mandel Ngan/AFP via Getty Images)

(CNSNews.com) – The Chinese foreign ministry slammed President Biden’s nominee for ambassador to Beijing for critical statements on China’s behavior, but state media said he was likely just talking tough to secure Senate confirmation in a climate where bashing China has become a requirement.

The Chinese Communist Party organ Global Times described Nicholas Burns’ words as “the toughest and most arrogant confirmation hearing statement an incoming U.S. ambassador has made before coming to China.”

It predicted that, if confirmed as ambassador, Burns will “inevitably suffer from setbacks” once he arrives at his post. It suggested that from the moment he arrives, Chinese authorities offer him no courtesies beyond “diplomatic etiquette.”

At his Senate Foreign Relations Committee confirmation hearing this week, Burns discussed a range of sensitive issues plaguing U.S.-China relations, used the term “genocide” to describe mass-scale rights abuses against minority Muslims, and accused Beijing of “stonewalling” on questions relating to the origins of the coronavirus pandemic.

“The PRC’s genocide in Xinjiang, its abuses in Tibet, its smothering of Hong Kong’s autonomy and freedoms, and its bullying of Taiwan are unjust and must stop,” he told the panel.

On Beijing’s threats to “take back” Taiwan – it claims the island democracy as part of China – Burns said it was the U.S. responsibility “to make Taiwan a tough nut to crack, help it increase its asymmetric defenses.”

And in comments likely to have particularly irked Beijing, Burns said the U.S. should not exaggerate China’s strengths or underestimate its own.

“The People’s Republic of China is not an Olympian power,” he said. “It’s a country of extraordinary strength, but it also has substantial weaknesses and challenges.”

Burns said China faces significant demographic, economic, and political challenges in the coming decades. It has also “angered” nearly all of its neighbors by being overly-aggressive, he added, citing its conduct in the South and East China Seas and the Taiwan Strait.

“By being so aggressive they have now stirred up a lot of opposition to them. And I think we ought not to exaggerate their strengths or underestimate the strengths of the United States.”

The U.S., he said, should have confidence in its strengths, and “in our values, that stand in brilliant opposition to China’s authoritarian regime.”

Wang repeated Beijing’s talking points on atrocities in Xinjiang (“an outrageous lie fabricated by a few anti-China scholars in Western countries and U.S. politicians”), Taiwan (“an inalienable part of the Chinese territory”), and the pandemic (“China has acted in an open, transparent and responsible manner in providing timely updates to the WHO and the international community.”)

He then advised Burns to be “keenly aware of the overall trend of world development” and not underestimate the Chinese people’s strong resolve and capacity to “defend their rights.”

After slamming Burns’ remarks in an editorial, Global Times said it could not be ruled out that he had deliberately used “tough words” in order to win confirmation

“Burns’ statement demonstrated the U.S. political elites’ overall hostility toward China,” it said. “The message of the hearing was: One needs to be this tough to be the U.S. ambassador to China today.”

“Burns is pitching himself for a job whereby appearing ‘tough on China’ is deemed a mandatory requirement by a hawkish Senate that’s divided on a 50-50 line,” said the state-owned China Global Television Network (CGTN) in a commentary.

“Burns is not likely to be a provocative ambassador. It’s just the Washington game which he is forced to play in order to get to the post.”

CGTN said it was the likes of China critics in the Senate like Sens. Ted Cruz (R-Texas) and Tom Cotton (R-Ark.) that made it necessary for Burns to “perform.”

“If Burns failed to deliver this rhetoric when quizzed by the senators, it’s obvious his appointment would be blocked by these hawkish individuals,” it said. “Burns is telling them what they want to hear, not necessarily what we should expect in office.”

“It is little more than political theater.”

Burns, professor of diplomacy and international politics at Harvard Kennedy School, served as undersecretary of state for political affairs in the Bush administration and is a former ambassador to NATO and Greece.