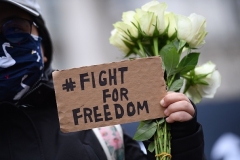 A protester holds a small placard at an event organised by Justitia Hong Kong to mourn the loss of Hong Kong's political freedoms, in Leicester Square, central London, on December 12, 2020. (Photo by JUSTIN TALLIS/AFP via Getty Images)

(CNSNews.com) – Expect to hear the word “patriot” in connection with Hong Kong a lot in the coming weeks and months.

As China’s biggest annual political event known as the “two sessions” starts this week, on the agenda are proposals to change the way the people of Hong Kong are represented, built on the premise that only “patriots” must be allowed to govern the territory.

What defines a patriot in this context is being debated, but according to one of Beijing’s top officials dealing with Hong Kong policy it means “loving the People’s Republic of China,” as led by the Chinese Communist Party (CCP).

“In our country, which practices socialist democracy, different political opinions are allowed,” Xia Baolong said during a virtual conference last month. “But there is a red line, that is, [people] are definitely not allowed to harm the country’s fundamental system.”

Xia said the “patriotism” requirement should apply to Hong Kong’s chief executive and members of the Executive Council, lawmakers in the 70-seat Legislative Council (LegCo), and judges at all levels, as well as others holding important statutory positions.

“Those who stand in opposition to patriots are destroyers of the ‘one country, two systems’ principle and they should not be allowed to take a share of the Hong Kong special administrative region’s political power,” he said. “Not now, not ever.”

The principle of “patriots governing Hong Kong” has been used periodically since before the former British colony’s return to Chinese rule in 1997 – it was alluded to in a NPC document in 2014 – but is now firmly in the spotlight, with President Xi Jinping using the phrase during a virtual meeting with the territory’s chief executive, Carrie Lam, in January.

Last year’s “two sessions” featured the introduction of China’s contentious national security law for Hong Kong, which outlaws actions viewed by Beijing as subversion, secession, and collusion with foreign forces – a Chinese response to mass pro-democracy protests, some violent, during 2019. 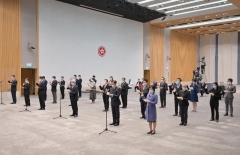 Critics called the imposed law a clear violation of China’s “one country, two systems” commitments governing the 1997 handover and, as feared, it has been used to target pro-democracy activists – most recently on Sunday, when 47 pro-democracy campaigners were charged with conspiracy to commit subversion, relating to an unofficial pro-democracy primary election held last July.

This year’s NPC session could prove even more controversial, with the proposed changes to Hong Kong’s electoral system.

Following Xia’s speech, Hong Kong’s mainland and constitutional affairs secretary Erick Tsang announced a bill requiring members of the 18 district councils – dominated by the pro-democracy camp since local elections in 2019 – to take the same “patriotic” oath required of others in government, or be banned from office for five years.

“You cannot say that you are patriotic but you do not love the leadership of the Chinese Communist Party or you do not respect it – this does not make sense,” he said.

Lau Siu-kai, vice-president of the Chinese Association of Hong Kong and Macao Studies – a semi-official body based in Beijing – told Global Times, itself a CCP mouthpiece, that Xia was not saying people have to love the party

He said Xia was emphasizing that the socialist system is the fundamental political system governing China, including Hong Kong, and that no-one is allowed to harm that system.

“You don't have to love the party or believe in communism or socialism, but you can’t take actions that try to change the fact that China is led by the CPC,” said Lau.

He said the government in Beijing will expect anyone wanting to be involved in Hong Kong politics to be “firm patriots.” Moreover, they “must be loyal to the central government and accept the leadership of the CPC.”

Of the 70 LegCo seats, half are directly elected and half indirectly elected through the functional constituencies. Elections should have been held last September, but Lam postponed them for a year, citing the coronavirus epidemic – a justification viewed skeptically by the pro-democracy camp and the Trump administration.

One day before the postponement was announced last summer, electoral authorities had disqualified 12 leading pro-democracy candidates, including four incumbents, from running on the basis they were deemed a threat to national security. When the four were dismissed after a Chinese ruling in November, the remaining 15 pro-democracy members resigned in protest, leaving the chamber without a viable opposition for the first time since the 1997 handover.

If the proposals outlined by Xia are implemented, the LegCo will in future likely comprise almost entirely pro-Beijing lawmakers.

The crux of the “one country, two systems” principle is chapter one, article five of Hong Kong’s mini-constitution, the Basic Law, which states, “The socialist system and policies shall not be practiced in the Hong Kong Special Administrative Region and the previous capitalist system and way of life shall remain unchanged for 50 years.”

Well before that 2047 date, Beijing’s whittling away of the freedoms promised to the territory late last century continues.