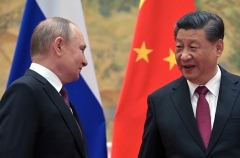 Ministry spokesperson Wang Wenbin called the claims, first reported in the New York Times the previous day, a “despicable” attempt to shift blame onto China, when the United States bore responsibility for the war.

Putin and Chinese President Xi Jinping met on the sidelines of the opening of the Beijing Games last month, and signed off on a lengthy declaration hailing a “no limits” friendship. Xi threw his support behind Putin’s push for security guarantees in Europe and an end to NATO expansion – Russian demands that dominated the discourse in the run-up to the February 24 invasion.

But according to anonymous U.S. and European officials cited in the Times, a western intelligence assessment found that senior Chinese officials had some direct foreknowledge of Putin’s intention to invade Ukraine. The attack began four days after the Olympics ended.

“The report by the New York Times is pure fake news,” said Wang. “Such practice of diverting attention and blame shifting is despicable. The ins and outs of the developments of the Ukraine issue are very clear. The crux of the issue is known to all.”

He then cited the critical views of three Americans – the late diplomat George Kennan, political commentator and author Thomas Friedman, and Democratic former congresswoman Tulsi Gabbard – on the question of NATO expansion and the impact it would have on relations with Russia.

“Those who created the problem should be the ones to undo it,” Wang said. “They should earnestly shoulder due responsibilities and take real actions to ease the situation and resolve the problem instead of shifting the blame to others.”

The claims emerged at a time when Beijing is walking an uneasy line between backing its ally in Moscow and maintaining its stance on “sovereignty and territorial integrity” – pillars of China’s foreign policy that are self-evidently under assault in Ukraine.

China abstained when the U.N. General Assembly this week adopted a resolution condemning the invasion and demanding the withdrawal of Russian forces. (Only four die-hard allies – Belarus, North Korea, Eritrea, and Syria’s Assad regime – joined Russia in voting “no.”)

Wang said on Wednesday China “had to abstain” because the draft resolution had neither been fully consulted upon nor taken into consideration the “history and complexity” of the crisis.

It also “did not highlight the importance of the principle of indivisible security,” he added, referring to Russia’s argument that countries in its neighborhood should not be admitted to NATO if doing so negatively impacts its security.

At the same time, Wang reiterated that China “always advocate[s] respect for the sovereignty and territorial integrity of all countries.”

On the day the invasion began, another Chinese foreign ministry spokesperson sparred with reporters when asked if China would condemn it.

“Why are you obsessed with China’s condemnation?” Hua Chunying asked one reporter, while accusing others of not being “neutral.”

Asked whether Putin had told Xi when they met that he was planning to attack Ukraine, Hua said, “Russia does not need to get others’ consent before making diplomatic decisions and taking actions.”

And asked if Xi gave Putin “his blessing” for the invasion, she called the question “offensive.”

China found itself in a similarly tricky balancing situation when Putin annexed Ukraine’s Crimea in 2014.

It did not join Syria and Venezuela in recognizing the move, but on the other hand also abstained rather than vote in favor of a U.N. Security Council resolution condemning the annexation.

Beijing’s foreign ministry offered similar comments to those being made now about the importance of respecting “sovereignty, independence and territorial integrity” while resolving disputes diplomatically.

On the day Crimea was formally incorporated into the Russian Federation, Putin in an address to the State Duma thanked “the people of China, whose leaders have always considered the situation in Ukraine and Crimea taking into account the full historical and political context.”

The weight of world opinion against Putin’s actions is considerably heavier in 2022 than it was in 2014, however.

Thomas W. Spoehr, director of the Center for National Defense at the Heritage Foundation, said China’s support for Russia is going to come under increased scrutiny as more and more countries back Ukraine.

“One has to believe it is experiencing ‘buyer’s remorse’ by aligning with Russia,” Spoehr, a retired U.S. Army lieutenant general, wrote in an analysis.

“While China cares little about world opinion, it does rely on trade to sustain its economy, and it won’t be long before sanctions currently applied to Russia are extended to those who do business with Moscow.”