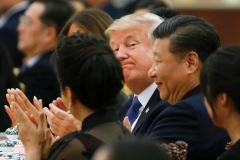 President Trump alongside Chinese President Xi Jinping during a state dinner in Beijing in November 2017. (Photo by Thomas Peter/AFP via Getty Images)

(CNSNews.com) – Beijing on Thursday slammed President Trump’s signing of a bill providing for sanctions on the perpetrators of “gross human rights abuses” against minority Uighurs in western China, warning that unless the U.S. backs off, it will “respond resolutely,” and the U.S. will bear the consequences.

The U.S. should “redress the mistake” and stop trying to harm China’s interests and interfere in its internal affairs, or face consequences, Zhao said.

Asked what form the consequences would take, he replied only that “how the situation will develop depends entirely on what the U.S. will do.”

The legislation provides for sanctions against officials found to be directly involved in oppressing Uighurs, freezing any assets in the U.S. and barring them entry into the U.S.

Trump did say in a statement that the administration would treat as “advisory and non-binding” a provision requiring him to give Congress advance notice before terminating sanctions barring entry, arguing that the limitation “could be inconsistent with my constitutional authorities to receive as diplomatic representatives certain foreign officials.” 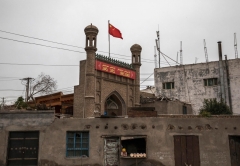 The Chinese flag flies over a mosque shut by authorities in Kashgar, Xinjiang province, in June 2017. (Photo by Kevin Frayer/Getty Images)

Trump signed the legislation, which passed both houses by overwhelming margins, at a time when he faces allegations of having indicated to President Xi Jinping his approval of China’s policy of buildings camps where Uighurs are being incarcerated.

In a memoir due for release next week, former National Security Advisor John Bolton wrote that the purported remarks were made when Trump met with Xi at a G20 summit a year ago. “According to our interpreter, Trump said that Xi should go ahead with building the camps, which Trump thought was exactly the right thing to do.”

Trump has not commented on that particular allegation, although in a tweet on Thursday he called Bolton’s book “a compilation of lies and made up stories, all intended to make me look bad. Many of the ridiculous statements he attributes to me were never made, pure fiction.”

The Justice Department has filed a suit to block the memoir’s release, arguing that it contains classified information.

According to the State Department, China’s policies in Xinjiang include “the mass detention of more than one million individuals in internment camps since April 2017.”

The allegation that Trump expressed approval for the camps stands in sharp contrast to his administration’s public stance on the issue.

Although the president hasn’t spoken out himself, his administration has led international condemnation of what Secretary of State Mike Pompeo described as “the stain of the century,” mobilizing other countries in Geneva in March last year, and on the sidelines of the U.N. General Assembly in New York last fall.

Pompeo has met with Uighur survivors of the camps, the State Department has announced visa restrictions on CCP officials linked to the abuses, and Commerce Secretary Wilbur Ross has barred the export of certain U.S. products to 28 Chinese entities in Xinjiang, to ensure they “are not used to repress defenseless minority populations.”

The administration has highlighted the religious freedom aspect of Beijing’s treatment of the Uighurs (Uyghurs), who like other minorities targeted in Xinjiang are Muslims. Pompeo has accused the CCP of “methodically attempting to strangle Uighur culture and stamp out the Islamic faith” and the situation has featured prominently at ministerials to advance religious freedom, in 2018 and again in 2019.

Strikingly, the Trump administration’s active campaigning has come at a time when many Islamic governments have shied away from challenging China’s treatment of their co-religionists, with some – including Saudi Arabia, Pakistan, Qatar, the UAE – going so far as to praise the very policies Washington is condemning.

In his reaction Thursday, Zhao reiterated Beijing’s position that its policies in Xinjiang province have nothing to do with religion or ethnicity, but are designed to combat terrorism and separatism.

Uighurs are Turkic-speaking Muslims whose historic homeland of East Turkistan fell under communist Chinese rule in 1949. The resource-rich region comprises about one-sixth of the country’s territory.

Reacting to Trump’s signing of the bill, the World Uyghur Congress (WUC) praised the passage of “the first legislative initiative to take concrete action to end the Uyghur crisis and hold those responsible for atrocities accountable.”

It said its passage in the House and Senate and signing within a matter of weeks showed “the increasing attention and momentum to easing the suffering of the Uyghur people.”

“We are deeply grateful to the U.S. government for passing this important act,” said WUC president Dolkun Isa, calling for “targeted and meaningful action” and urging other countries to pass similar legislation.