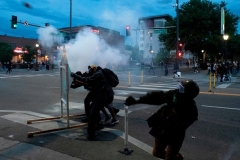 Demonstrators throw rocks at police officers during a protest in Denver, Colorado on May 31, 2020. (Photo by JASON CONNOLLY/AFP via Getty Images)

(CNSNews.com) – Stung by U.S.-led criticism of Beijing’s attempts to crack down on dissent in Hong Kong, Chinese officials and state media are using reports of protests in American cities to make political points about U.S. “double standards and hypocrisy.”

The Trump administration and lawmakers from both parties have been outspoken in their criticism of the suppression of pro-democracy protests in Hong Kong and China’s plans to impose new security legislation on the territory. Hong Kong protests have occasionally seen violent flare-ups, and authorities regularly accuse the U.S. of stoking them as a way of indirectly attacking China.

Now, as images rioting in the U.S. are seen around the world, Chinese critics have seized on the opportunity to divert attention away from Beijing’s stifling of Hong Kong’s freedoms – and for payback.

The protests were sparked by the death of George Floyd, a black man who died May 25 at the hands of a white policeman in Minneapolis, but in numerous instances have been hijacked by elements bent on looting, vandalism and arson. “Groups of outside radicals and agitators are exploiting the situation to pursue their own separate, violent, and extremist agenda,” Attorney General Bill Barr said on Sunday.

Over the weekend, State Department spokeswoman Morgan Ortagus posted a tweet calling China’s plan to impose a security law on Hong Kong “a pivotal moment” and adding, “Freedom loving people around the world must stand with the rule of law and hold to account the Chinese Communist Party, which has flagrantly broken its promises to the people of Hong Kong.”

A couple of hours later, Ortagus’ Chinese counterpart, Hua Chunying, retweeted that message, adding her own pointed comment: “I can’t breathe.” Those were reportedly some of Floyd’s last words, captured on camera as a policeman knelt on his neck.

CCP media outlets weighed in, characterizing what law enforcement are dealing with on American streets as comeuppance for U.S. criticism of Chinese actions in Hong Kong.

Last summer, House Speaker Nancy Pelosi (D-Calif.) attracted vitriol in Beijing for saying during a congressional hearing that mass protests in Hong Kong – against a controversial draft bill that would have allowed extradition to China – were “a beautiful sight to behold.”

The phrase “beautiful sight” was trending on Chinese social media over the weekend, in connection with scenes of looting and burning buildings in American cities.

Global Times, the CCP tabloid, dedicated an editorial to the subject on Sunday, entitled “‘Beautiful sight’ extends from HK to US.”

It wondered sardonically whether violent elements from Hong Kong had “snuck into these U.S. cities” to spread mayhem there.

Recalling American politicians’ reaction to the mass protests in Hong Kong last year, Global Times said, “Obviously, they didn’t expect such a beautiful sight to expand so fast that it could be seen now from their own windows.”

“The protests in the U.S. are like a mirror that reflects the shame and disgrace of U.S. politicians as well as the deep-rooted political dysfunction and chaotic values in the U.S.,” it added.

An excerpt of the front page of Monday’s Global Times, an organ of the Chinese Communist Party (Screen grab: Global Times)

“I highly suspect that Hong Kong rioters have infiltrated American states,” he wrote in one. “Attacking police stations, smashing shops, blocking roads, breaking public facilities, these are all routine in their protests. Vicious HK rioters obviously are mastermind of violent protests across the U.S.”

In response to President Trump’s tweets about the Secret Service protecting the White House as protests took place nearby on Friday night, Hu tweeted, “Mr. President, don’t hide behind the Secret Service. Go to talk to demonstrators seriously. Negotiate with them, just like you urged Beijing to talk to Hong Kong rioters.”

Aside from the narrative of comparing the unrest in Hong Kong and the U.S., Chinese outlets also directed their gaze at race relations in the U.S. – a frequent theme in Beijing’s commentary on U.S. human rights.

A cartoon in the CCP’s China Daily depicted an American police officer wearing a white hood emblazoned with the word “racism,” kneeling over a prone, gasping statue of liberty.

The CCTV state broadcaster called the situation in the U.S. “a glass of bitter wine brewed by the U.S. itself.”

Dmitry Polyanskiy, a Russian diplomat at the U.N. in New York, noted in a tweet that the U.S. and Britain wanted the U.N. Security Council to discuss the Hong Kong situation. (Russia and China objected.)

At the same time, Polyanskiy continued, the U.S. delegation had “failed to answer legitimate questions of how their appeals to calm to protesters in Minneapolis are coherent with the inciting of protesters in Hong Kong.”