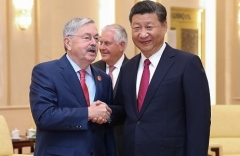 (CNSNews.com) – China’s ambassador to Washington is a frequent guest on U.S. television and op-ed pages, but when the U.S. ambassador in Beijing submitted an op-ed this week to People’s Daily, the Chinese Communist Party organ rejected it.

Calling the submission by U.S. Ambassador Terry Branstad “full of loopholes and seriously inconsistent with facts,” the paper suggested that if he wanted it published he should first “make substantive revisions based on facts in the principle of equality and mutual respect.”

“Ironically,” Secretary of State Mike Pompeo said in a statement reacting to the incident, “the op-ed called for more positive relations between our two countries and asked to ‘build relationships through unrestricted engagement and uncensored discussion.’”

Pompeo noted that China's Ambassador to the U.S. Cui Tiankai has had five op-eds published in prominent U.S. papers this year, and has been interviewed by major networks.

“China’s Foreign Ministry and state-owned propaganda organs like the Global Times and China Daily regularly use free access to American social media platforms like Twitter and Facebook to attack our policies, our way of life, and the very system that protects their ability to speak freely,” he said. “They do this in other democratic countries, too.”

In his op-ed submission, entitled “Resetting the Relationship Based on Reciprocity,” Branstad – a former governor of Iowa – underlined the Trump administration’s assertion that the bilateral relationship is not genuinely balanced and reciprocal, citing as an example “unequal access for U.S. companies, journalists, diplomats, and even civil society.”

“While U.S. journalists face restrictions on reporting and even entering China, Chinese state media workers have long enjoyed open access in the United States,” he wrote. “PRC diplomats have open access to American society, while our diplomats in China are required to navigate a state approval system for even the most basic engagements with the Chinese people.”

The Trump administration has been pushing back on the restrictions, especially in the media field. This year it has designated nine Chinese media organizations – including People’s Daily – as “foreign missions,” determining that they are “either substantially owned or effectively controlled by a foreign government.”

On that basis, the U.S. government set limits on the number of Chinese nationals allowed to be employed at the organizations’ U.S. offices.

In its rejection letter to Branstad, People’s Daily raised that issue, accusing the U.S. government of “escalating political suppression and persecution against Chinese press institutions in the United States out of Cold War mentality and ideological prejudice.”

“The United States should immediately correct its discriminatory practices and effectively ensure the safety and rights of journalists of Chinese media in the United States, including those working for the People’s Daily,” it said.

Cui’s op-eds, dealing in part with Beijing’s narrative of the coronavirus outbreak, have appeared this year in U.S. publications including the New York Times in April, the Washington Post in May, and Politico in July.

His television appearances included interviews in February on CBS’ “Face the Nation” and PBS NewsHour, on “Axios on HBO” in March, and on CNN in July. In August he was interviewed by a NBC News host at the Aspen Security Forum.

“The CCP won’t let the U.S. Ambassador to the PRC publish an op-ed in China, though they’re free to publish whatever they want in U.S. media,” State Department spokeswoman Morgan Ortagus tweeted on Wednesday.

“They won’t let the Chinese people use Twitter either, though I’m sure their [foreign ministry] officials will tweet about this.”