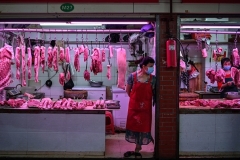 Vendors wearing face masks wait for customers in a market in Wuhan, China on May 18, 2020. (Photo by Hector RETAMAL/AFP via Getty Images)

(CNSNews.com) – Chinese state media outlets early this year used terms like “Wuhan virus” and “Wuhan pneumonia” in their news reporting on the coronavirus outbreak that began in that city, but after Beijing began attacking U.S. officials for doing so, references were scrubbed.

In some cases, headlines and text were amended, while in others, web pages containing the offending language were evidently made inaccessible.

Searches of archived pages indicate that the changes were made around mid-March.

On March 6, Secretary of State Mike Pompeo used the term “Wuhan coronavirus” during a CNBC interview, and “the Wuhan virus” during a Fox & Friends appearance. On both occasions, when asked about doing so, Pompeo said the CCP itself had said the outbreak began in Wuhan.

Two days later the Global Times in a March 8 editorial said Pompeo’s reference to “Wuhan virus” was “rude and vicious.”

On March 24, Chinese foreign ministry spokesman Geng Shuang complained about the use of such terms by Pompeo and others “to stigmatize China,” and said it was the United States “that first claimed that the virus originated in China and used such terms as ‘Chinese virus’ and ‘Wuhan virus.’”

But rewind to January, and the Global Times itself was using those and similar terms in its headlines and reports:

Around mid-March – as Pompeo, President Trump and others were being criticized for using such language – someone went back into the CCP paper’s archive and amended those headlines, which now read:

Small edits were made within the articles as well: The Jan. 9 story included the words, “the pneumonia originating in Wuhan,” but when the headline was changed the word “originating” was removed.

And in the Jan. 19 story, two references to “Wuhan pneumonia” were amended to “pneumonia in Wuhan.”

Meanwhile China Daily ran an item on January 21 headlined: “What we know about the Wuhan virus.”

The headline was subsequently changed completely, to “Measures afoot to stem contagion,” and the URL was changed.

The CGTN network posted a video on Jan. 21 entitled “China’s handling of Wuhan pneumonia is efficient and reliable.” It appears to have been removed entirely from both the CGTN website and its Facebook page.

And People’s Daily ran a report on Jan. 25 headlined: “Wuhan pneumonia a wake-up call for basic Chinese research,” with two references in the text to “the Wuhan virus.” That report appears to have escaped notice, as it’s still accessible.

The U.S. government protested, and three days later, Trump used the term “Chinese Virus” on his Twitter feed for the first time. The president used the term eight times in tweets between March 16 and 22, although he has not done so since.

Sen. Kamala Harris (D-Calif.) last week introduced a resolution “condemning all forms of anti-Asian sentiment as related to COVID–19,” and saying the use of terms like “Chinese Virus” and “Wuhan Virus” are perpetuating “anti-Asian stigma.”

See also:
China Bristles at Pompeo’s References to ‘Wuhan Coronavirus’; Don't Call It 'Wuhan' (Mar. 9, 2020)
Linking the Coronavirus to China is ‘Racist’?  Numerous Diseases Have Been Named For Places (Mar. 11, 2020)