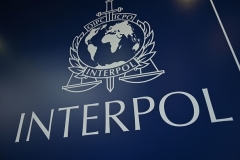 The logo of INTERPOL is seen during the organization’s general assembly in Istanbul on Tuesday. (Photo by Ozan Kose/AFP via Getty Images)

(CNSNews.com) – The prospect of a Chinese security official obtaining a senior position in INTERPOL has cast a shadow over the first gathering of the international policing agency’s general assembly in two years.

A Republican senator is challenging the Biden administration over the matter.

The nomination of Hu Binchin, a deputy director in China’s Ministry of State Security, to a seat on INTERPOL’s 13-person executive committee is not the only electoral controversy facing the three-day meeting now underway in Istanbul.

On Thursday, the organization’s 195 members will also vote to elect a new president, choosing between a senior police official from a European democracy and one from an autocratic Gulf state.

INTERPOL has been dogged in recent years by accusations that authoritarian regimes – particularly Russia, China, and Turkey – have abused its mechanisms to target political opponents, in contravention of the organization’s own constitution.

It is partly for that reason two of the candidates in Thursday’s election have set off alarm bells.

Nebraska Republican Sen. Ben Sasse asked Secretary of State Antony Blinken and Attorney General Merrick Garland in a letter on Tuesday what steps the administration in response to the possibility of a Chinese Communist Party security official taking an executive committee seat.

Sasse said Hu Binchin’s election “would present a grave threat to the organization’s integrity and threaten to turn legitimate inter-governmental law enforcement cooperation into another tool of CCP transnational repression.”

“As one of INTERPOL’s largest contributors, is the U.S. government considering withholding or reducing U.S. voluntary contributions to ensure that U.S. taxpayers are not inadvertently funding transnational repression and to more effectively communicate that the United States will not accept INTERPOL’s endorsement and facilitation of CCP harassment and surveillance of dissidents in the U.S. and across the globe?” he asked. “If not, why not?”

U.S. taxpayers account for the largest statutory contribution – 19.44 percent of the total – with the next biggest contributions coming from Japan (12.07 percent), Germany (7.7 percent), France (5.8 percent) and Britain (5.7 percent).  China contributes 3.7 percent and Russia 1.7 percent, while 142 smaller or developing countries at the other end of the scale contribute less than 0.1 percent each.

The U.S. was also the third-largest voluntary contributor in 2020.

INTERPOL’s executive committee is elected by the general assembly, with each member-state having one vote, regardless of the size of its contribution. Meeting three times a year, it supervises the secretary-general and the roughly 1,000 members of the general secretariat staff, based in Lyon, France.

The contest for the presidency in Thursday’s election is between a senior Czech police official, Sarka Havrankova, who if successful would become only the second woman to lead the 98-year-old organization, and Major General Ahmed Naser al-Raisi, the inspector general of the interior ministry of the United Arab Emirates.

Human rights advocates and some European lawmakers have accused al-Raisi of complicity in the arbitrary detention and torture of dissidents.

INTERPOL’s president serves for a four-year term, presiding over the executive committee and general assembly, but remains an official of his or her national police service. The secretary-general, a “neutral and independent” post held since 2014 by Jürgen Stock, is responsible for the day-to-day running of the headquarters and staff.

In his letter Sasse recalled the CCP’s attempts to abuse INTERPOL’s crime-fighting tools like its “red notice” mechanism, which alerts police forces about internationally-wanted fugitives.

“In both cases, INTERPOL only withdrew the red notices following international public pressure.”

According to Safeguard Defenders, a human rights NGO with a strong focus on China, Beijing ramped up its use of INTERPOL red notices after Xi Jinping took power. From an annual average of around 33 up until 2014, Chinese authorities have since then issued 200 or more each year, with the number reportedly exceeding 600 in 2016 alone.

It says China’s misuse of the red notices “includes persecution on political, ethnic or religious grounds (in particular, but not limited to, Uyghurs); harassment and intimidation of political opponents abroad; improper use of INTERPOL notices to induce ‘fugitives’ to return ‘voluntarily’; and the use of red notices to attack family members and relatives back home.”

(While China is widely accused of abusing the system to target dissidents, it is far from the biggest user of the tool. Of the 7,564 current red notices on the website, 3,222 were issued by Russia alone. Not all red notices are made public.)

INTERPOL’s secretariat has taken some steps in response to criticism about abuses of its systems. In remarks to the media in Istanbul on Tuesday, Stock said that in 2016 he had set up a taskforce that “reviews every single red notice request from every member country, to ensure that it is compliant with our INTERPOL constitution and the rules of procedure.”

Stock stressed that the organization’s mandate was a limited one.

“We are not allowed to enter into any issues that have been predominantly a political, a military, a racial, or a religious character. INTERPOL has simply to stay away from these activities.”

He acknowledged that “today’s geopolitical realities” did not always make INTERPOL’s work any easier.

On Tuesday the assembly agreed to adopt new rules for the executive committee, designed to improve “transparency,” including a requirement for candidacies to be submitted at least 45 days before the general assembly session.

Stock said the changes “will enable the executive committee to set clear rules regarding ethics, accountability and integrity by its members, increasing both awareness and confidence in its activities.”