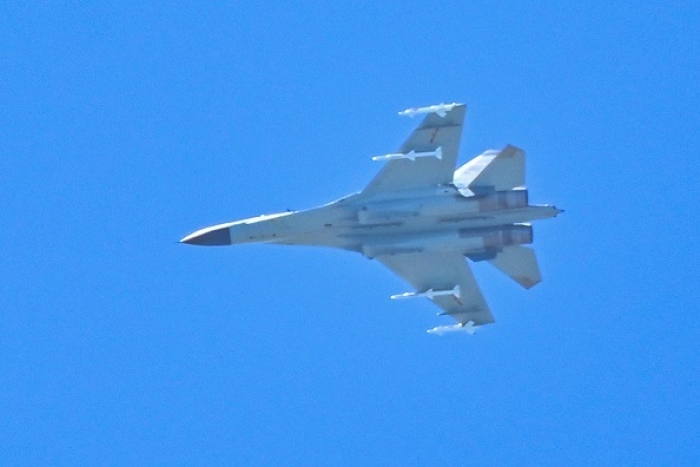 A Chinese fighter jet flies off the Chinese mainland near the Taiwan Strait on Friday. (Photo by Hector Retamal / AFP via Getty Images)

(CNSNews.com) – In what was meant to be the final day of its biggest-ever military exercises surrounding Taiwan, China’s People’s Liberation Army on Sunday deployed 66 warplanes and 14 warships into areas around the island, according to Taiwan’s defense ministry.

It said 12 of those aircraft had crossed the “median line” dividing the Taiwan Strait between the mainland and the island, and that Taiwan had scrambled patrol planes, broadcast radio warnings, and deployed missile defense systems to track the PLA aircraft and warships.

China's Eastern Theater Command confirmed that bombers, fighter jets, and early warning and electronic warfare aircraft had taken part in the drills, which simulated attacks on the ground and “improved capabilities to destroy crucial island targets with precision strikes.”

“Multiple bomber formations flew across the Taiwan Strait from north to south and from south to north, while several fighter jets conducted joint drills with destroyers and frigates,” it said.

Chinese state media claimed that a PLA destroyer had breached Taiwan’s territorial waters limit – 12 nautical miles (22 kilometers) off the northeastern coast – although the Taiwanese navy disputed that. (Since it does not recognize Taiwan’s sovereignty, Beijing also does not acknowledge its claim to have territorial waters.)

The series of exercises, China’s response to House Speaker Nancy Pelosi’s brief visit to Taiwan last week, began with the firing over several hours of at least 11 ballistic missiles from the mainland. They landed in waters off Taiwan’s northern, southern and eastern coastlines.

In parallel to the war games, China’s foreign ministry on Friday announced it was severing bilateral contacts with the U.S. in eight key areas, including dialogue between military commanders, talks on climate change, and cooperation on counter-narcotics and criminal matters.

In addition to these “countermeasures” came a formal announcement that Pelosi and her “immediate family members” were now subject to sanctions.

Beijing has sanctioned U.S. critics before as punishment for their stances on China-related matters – among them members of Congress and members of the former Trump administration – but never a politician as senior as the Speaker of the House, second in the line of succession to the presidency.

Biden administration officials accused China of intentionally escalating tensions, and of unilaterally trying to change the status quo across the Taiwan Strait – precisely what China is accusing the U.S. and Taiwan of doing.

“We’ve seen how Beijing has attempted to change the status quo on Taiwan for some time – for example, more than doubling the number of aircraft flown over the centerline that separates China and Taiwan over the past two years,” Secretary of State Antony Blinken said during a visit to Cambodia, describing the current exercises as “a significant escalation.”

“We don’t want unilateral changes to the status quo from either side,” Blinken reiterated. “We do not support Taiwan independence; we expect cross-strait differences to be resolved peacefully, not coercively or by force.”

The Chinese Communist Party’s China Daily quoted Maj. Gen. Meng Xiangqing, a professor at the PLA National Defense University, as saying the PLA’s exercises have effectively done away with the “median line,” a concept which Beijing had never accepted as legitimate in the first place.

“The exercises have displayed to the world the Chinese people’s unwavering resolution to safeguard the motherland’s sovereignty and territorial integrity and especially showed the PLA’s strong power and capability,” Meng said, adding that the actions pave the way for the reunification of Taiwan and the mainland.

The CCP claims the self-government island democracy as its own and has vowed to bring it back under control of the mainland, by force if necessary.

The U.S. under the 1972 Taiwan Relations Act is committed to provide the island with the military means to defend itself.

While the administration has repeatedly defended Pelosi’s right to travel to Taiwan, highlighting that Congress is an independent, coequal branch of government, Chinese officials insist President Biden “allowed” her to make the trip.

Chinese Foreign Minister Wang Yi said during a visit to Bangladesh on Sunday the White House had “arranged” and “orchestrated” the visit.

“China is not the China of 120 years ago, and we refuse to be treated like Iraq, Syria, or Afghanistan,” Chinese foreign ministry spokesperson and assistant foreign minister Hua Chunying told a briefing earlier.

“The Chinese people will never allow any foreign force to bully, oppress, or subjugate us,” she warned. “Anyone who would attempt to do so will find themselves on a collision course with a great wall of steel forged by over 1.4 billion Chinese people.”