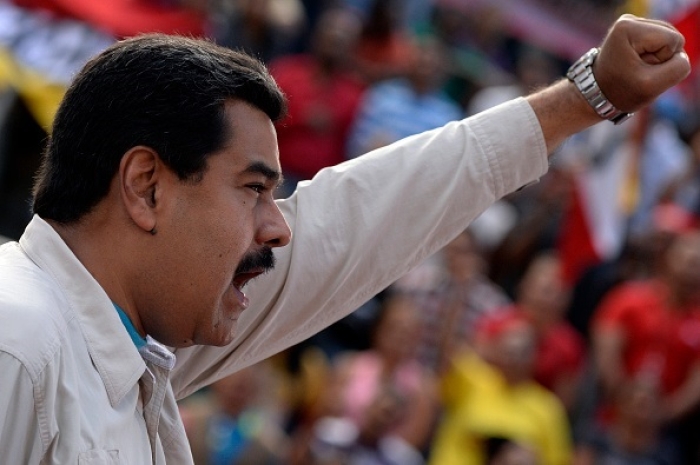 The U.S. government has not recognized Nicolas Maduro as Venezuelan’s president since 2019, a position shared by more than 50 other governments. (Photo by Federico Parra/AFP via Getty Images)

(CNSNews.com) – The Biden administration is moving, “inch by inch,” towards formally recognizing Nicolas Maduro’s socialist regime in Venezuela, Sen. Ted Cruz (R-Texas) charged this week, saying such a move “would be a catastrophic mistake.”

“I believe this administration is moving step by step, systematically, towards formally recognizing the Maduro regime,” Cruz said in a speech on the Senate floor on Wednesday.

“I think the Biden administration would do it expeditiously – they’d do it today, if they could,” he said. “But they know the political costs are high, so instead they’re advancing incrementally, inch by inch.”

Cruz pointed to the administration’s recent decision to ease oil sanctions, in exchange for the regime resuming talks with the Venezuelan opposition.

“Right now, they’re starting to unwind sanctions on Venezuelan oil, while continuing to stifle drilling here at home, forcing American energy producers to seek oil from dictators and enemies of America, rather than produce high-paying jobs here in the United States.”

Cruz added that U.S.-produced oil was lower in carbon emissions than foreign oil, “and yet the Biden foreign policy is such that they relish putting billions in the coffers of dictators.”

On Saturday, the U.S. Treasury Department announced the easing of sanctions on Caracas, granting the U.S. oil giant Chevron Corp. a six-month license to resume working there, and requiring that the crude oil goes to U.S. refiners.

The move was linked to a decision by the regime to resume talks in Mexico City with the opposition alliance known as the Unitary Platform, led by Juan Guaidó. Several rounds of talks were held in the Mexican capital in 2021, but the process stalled 13 months ago.

The Trump administration in 2019 accused Maduro of electoral fraud and recognized Guaidó, the National Assembly leader, as interim president under Venezuela’s constitution. More than 50 other countries also do not recognize the regime.

Maduro, meanwhile, has been indicted in the U.S. for alleged narco-terrorism, with a $15 million reward offered for information leading to his arrest and/or conviction.

The Biden administration has pursued the same policy as its predecessor regarding Maduro and Guaidó, but over the course of this year has signaled a willingness to loosen oil sanctions in a bid to secure additional supplies and ease fuel prices linked to Russia’s war in Ukraine.

Cruz suggested the sanctions easing was part of a broader foreign policy shift in Latin America which, he claimed, “has given momentum to the hard-left, pro-Chavez, pro-Castro, anti-American movements across the hemisphere.”

Cruz said Biden after taking office “froze out pro-American governments in Latin America,” recalling as an example his decision not to speak to former Colombian President Ivan Duque for five months after taking office. A “predictable result” of Biden’s approach, he said, was the rise of the left, whose flag-bearer Gustavo Petro became Colombia’s first leftist president after elections last summer.

“For the Biden administration, they were thrilled to see an anti-American leftist like ‘Lula’ in power, and they were deeply dismayed to see a pro-American friend and ally like Netanyahu in power.”

In other Republican reaction to the decision to ease sanctions – a longstanding demand by progressive Democrats – Sen. James Lankford (R-Okla.) said the policy was destroying “any hope at returning to US energy independence.”

“The U.S. should not be pre-emptively rewarding a narco-terrorist regime that has a history of using negotiations as a tactic for delaying meaningful action,” the ranking members of the Senate Foreign Relations Committee and House Foreign Affairs Committee, Sen. Jim Risch (R-Idaho) and Rep. Michael McCaul (R-Texas) said in a joint statement.

They added that “any change in U.S. policy toward Venezuela must be contingent on a transfer of power from the Maduro regime to a democratically elected government.”

Venezuela’s next presidential election is scheduled for 2024.

In a joint statement Secretary of State Antony Blinken and his British, Canadian, and European Union counterparts welcomed the decision to return to dialogue.

“We urge the parties to engage in good faith toward a comprehensive agreement leading to free and fair elections in 2024, the restoration of democratic institutions, and an end to the humanitarian crisis in Venezuela,” they said.

They restated earlier calls for the regime to unconditionally release “all those unjustly detained for political reasons,” for an independent electoral process and judiciary, for freedom of expression, and for respect for human rights.

“We reiterate our willingness to review sanctions policies if the regime makes meaningful progress in the announced talks to alleviate the suffering of the Venezuelan people and bring them closer to a restoration of democracy,” the foreign ministers said.

Is Biden Exploring Venezuela Oil Option? ‘A Lot of Alternatives; We Haven’t Made Up Our Mind Yet’ (Oct. 7, 2022)