(CNSNews.com) – Ahead of a U.N. General Assembly vote on Thursday to remove Russia from the Human Rights Council, U.N. Secretary-General Antonio Guterres’ stance that the issue could set a “dangerous precedent” is puzzling observers.

“Why is the U.N. defending Putin?” Senate Foreign Relations Committee ranking member Sen. Jim Risch (R-Idaho) asked on Twitter. “The U.N. is clearly not worried about setting the precedent of having a country committing war crimes on the Human Rights Council. Russia should be suspended immediately.”

When questioned on calls to oust Russia from the HRC, spokesmen for Guterres have over several days stated that council membership is a matter for the General Assembly – but have also added that the U.N. chief has concerns about the “precedent.”

They have maintained that line even when it has been pointed out that suspending Russia would not in fact set a precedent, since the General Assembly in 2011 removed Libya’s Gaddafi regime from the HRC.

Guterres has not been silent on Russia’s invasion of Ukraine, especially in recent days as alleged atrocities against Ukrainian civilians in Bucha and elsewhere came to light.

He told the Security Council this week that Russia’s “fully-fledged invasion” of Ukraine was “one of the greatest challenges ever to the international order and the global peace architecture, founded on the United Nations Charter,” and voiced support for an independent probe into war crimes allegations.

Yet on the question of Russia’s removal from what the U.N. touts as its premier human rights body, Guterres has been wary.

Asked during a daily briefing last week if Guterres had a position on the matter his spokesman, Stephane Dujarric, said, “there is a certain level of concern about the setting of a dangerous precedent and I will leave it at that.” 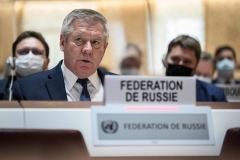 A reporter recalled that Dujarric had previously “suggested that on, in principle, [Guterres] didn’t think it was a good idea,” but asked whether the secretary-general’s assessment had changed, given the situation in Bucha.

Haq repeated the point about it being a matter for member-states to decide, before adding, “What the worry has been on this side is the precedent being set about this action.”

Asked to elaborate on the “precedent” claim, Haq said, “I think I will leave it at what I’ve just said.”

Another reporter challenged the assertion that removing Russia from the HRC would be a precedent at all, citing Libya’s suspension in 2011.

Haq repeated his desire to “leave it at that.”

“Obviously, the – it’s up to the members of the General Assembly to determine actions as they will,” he continued. “The question is about the precedent that may be set, and I think the member-states know what we mean when we say that.”

“You are saying something that is untrue,” the reporter interjected. “You’re saying that this would be a precedent. It is not.”

“I think you and I both know what the difference is,” Haq said.

When the questioner said he did not and asked for further explanation, Haq shut down the line of inquiry, saying, “No, I’m sure you do,” then calling on another reporter.

On Wednesday, Dujarric was back at the podium in New York.

Dujarric cited Guterres’ recent comments about violations of the U.N. Charter and on the situation in Ukraine.

But, “on the issue that’s being considered in the General Assembly resolution tomorrow, that is an issue for member-states to decide,” he repeated. “And the secretary-general’s position, as myself and Farhan [Haq] have explained, remains unchanged.”

Queries to both Dujarric and Haq, asking them to explain exactly the concerns about the “precedent,” brought no response by press time.

U.N. Watch Executive Director Hillel Neuer, described as “extraordinary” the assertion that suspending Russia would set “of a dangerous precedent.”

“Failure to enforce the Human Rights Council's own rules – members must uphold highest standards, gross abusers face suspension – is what would be dangerous,” he said. “And precedent was on our side: U.N. removed Qaddafi's Libya in 2011 for atrocities.”

(U.N. Watch has led campaigns to have abusive governments removed from the HRC, including Libya in 2011, and Venezuela’s Maduro regime and Russia more recently.)

Neuer also tweeted that U.N. representatives “fear our campaign opens a can of worms,” pointing out that current HRC members include China, Cuba, Eritrea, Libya, Mauritania, Pakistan, Somalia, and Venezuela.

Also commenting on Twitter was David Litman, a research analyst for the Mideast media monitoring group CAMERA: “In the twisted world of U.N. logic, it’s not a concerning precedent when the likes of Russia, China, and Cuba get to join the HRC, but it is a concerning precedent that they might be kicked off. Multilateralism for its own sake is a damaging drug.”

When the General Assembly in 2011 agreed to suspend Libya from the HRC – “by consensus,” no state called for a recorded vote – it was countries like China and Russia that insisted the move should not be seen as a precedent.

As reported at the time, Nicaragua griped that the suspension set “a bad precedent,” while the Cuban delegate said Havana had consistently opposed the provision in the HRC’s founding resolution that allows for suspension of a member.