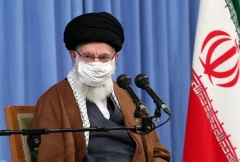 (CNSNews.com) – As Palestinian terrorists in Gaza continued to fire hundreds of rockets into Israel, killing both Jews and Arabs, Iran’s supreme leader Ayatollah Ali Khamenei urged Palestinians to step up their “resistance.”

“Zionists understand nothing but the language of force, so the Palestinians must increase their power and resistance to force the criminals to give up and stop their barbaric acts,” the Mehr news agency quoted Khamenei as telling a meeting of students on Tuesday night.

With the barrage of rocket fire from the Hamas-ruled Gaza Strip that began on Monday evening continuing into Wednesday morning, the death toll is climbing.

In Lod, a city with Jewish and Israeli Arab communities near Ben Gurion airport, an Arab man and his daughter girl were killed when a rocket fired from Gaza struck their home, also destroying their car parked outside.

“Hamas missiles do not differentiate between Jews and Arabs,” the mayor of Lod, Yair Revivo, was quoted as saying.

Earlier on Tuesday, two Israeli women were reported to have been killed when rockets hit their homes in separate strikes in the southern city of Ashkelon, and a woman was killed when a rocket hit a building in Rishon Lezion, a suburb of Tel Aviv.

In ongoing retaliatory strikes targeting terror infrastructure in Gaza, the Israeli Defense Forces (IDF) said it destroyed a nine-story building housing Hamas’ intelligence center and its West Bank command. The IDF said it had given warning several hours beforehand that the building would be hit. 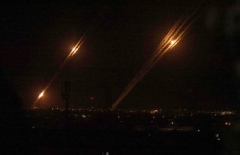 Rockets are launched towards Israel from Rafah in the southern Gaza Strip early Wednesday morning. (Photo by Said Khatib/AFP via Getty Images)

According to Hamas’ health ministry, 32 people, including children, have been killed in Gaza since Monday.

The IDF says it has killed “dozens” of terrorists in the retaliatory strikes. It also says that about one-third of the rockets are falling short, landing inside Gaza. Whether any casualties resulted from those failures remains unclear, although the IDF alleged on Tuesday that rockets falling inside the Hamas-ruled enclave were responsible for some of the deaths of Palestinian children there.

The escalation of recent days has been linked to a combination of tensions and grievances in Israel’s hotly-contested capital, Jerusalem.

They include a looming court decision on the possible eviction of several Palestinian families from their homes in the city’s northeast, a planned march by Israelis in the Old City to mark Israel’s Jerusalem Day – canceled at the last minute – and clashes on the flashpoint Temple Mount between security forces and rock-throwing Palestinians that have marred the final days of Ramadan.

Palestinians and their supporters accused Israel of “attacking” al-Aqsa mosque, the third holiest site in Islam.

Stoking the embers from Tehran has been Khamenei, who in a televised speech marking the regime’s Qods Day on Friday called on Muslims to confront Israel.

“Israel is not a country, rather it is a terrorist camp against the Palestinian nation and other Muslim nations,” he said. “Fighting against this despotic regime is fighting against oppression and terrorism. And this is a collective responsibility.”

Khamenei extolled “the continued activities of the resistance” – the regime’s favored term for terrorist groups like Hamas, Palestinian Islamic Jihad (PIJ) and Hezbollah – and observed that, in the past, “the Palestinian youth used to defend themselves by throwing stones, but today, they respond to enemy attacks with precision missiles.”

The incitement continued on Monday, with a tweet by the ayatollah advising all Palestinian factions to “form a single unit” and “use the tools at their disposal.”

Some Iranian media outlets have been hyping the rocket attacks, with a Mehr headline trumpeting “Tel Aviv targeted with rockets of Resistance.”

Saluting those launching the rockets for their “ingenuity and courage,” it said their show of strength “should awaken the conscience of the Muslim world especially that of the traitorous regimes that have diplomatic ties with the illegal Zionist entity.”

“Now is the time to rally to the support of the Palestinians and provide them all possible means to improve the power, precision, and range of the rockets in their arsenal,” Keyhan said. It added that militant groups could “target Tel Aviv, Haifa and Eilat with more powerful projectiles, perhaps ballistic missiles, if this technology could be transferred to them.”

The two main terrorist groups involved in the rocket barrages, Hamas and PIJ, have long acknowledging the crucial support they get from the Iranian regime.

On Tuesday, a spokesman for PIJ’s “Al-Quds Brigades,” Abu Hamza, said in a video clip posted online that the projectiles his group had fired into Ashkelon this week had included Iranian-supplied “Badr-3” rockets.

He attributed the success to the terrorist group’s “engineers” as well as the support of “the Islamic Republic in Iran, which has been generous with us in every aspect.”

“The essence of this strategy [to confront Israel] is the resistance project – complete resistance including the armed military resistance at the top,” he said.

“From here, I salute all the components of the nation that embrace and support the choice of resistance, backs it on the ground in Palestine,” Haniyeh said. “Here, I am particularly specifying the Islamic Republic of Iran, which has not faltered in supporting and funding the resistance financially, militarily, and technically.”