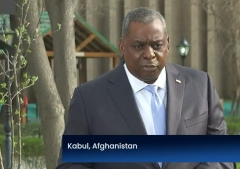 (CNSNews.com) – Defense Secretary Gen. Lloyd Austin’s unannounced visit to Afghanistan Sunday came amid indications that the Biden administration may postpone a troop withdrawal beyond the May 1 deadline set down in a deal signed by the Trump administration in Doha 13 months ago, even as the Taliban insists that it has met “all” of its commitments under the agreement.

Ahead of the stop, Austin told reporters traveling with him on an Asian tour that the decision on withdrawing the military personnel was President Biden’s to make, and that he had yet to make a decision or announcement “on when he’ll decide to remove the troops.”

The deadline for the drawdown, as envisaged in an agreement signed by U.S. and Taliban officials in Doha in February 2020, is now less than six weeks away.

After a meeting in Moscow last week involving officials from the U.S., Afghanistan, the Taliban, and the Chinese, Russian and Pakistani governments, the Taliban warned the U.S. not to jettison the May 1 deadline.

“We had 18 months of negotiations with Americans, and they agreed that they will withdraw in 14 months,” Taliban negotiator Suhail Shaheen said on Friday. “They should leave and if they don’t leave by the end of April that means they continue the violation of the agreement. That violation will not be from our side, but it will be from their side. In that case, if there is an action of course there will be a reaction.”

Secretary of State Antony Blinken earlier put forward proposals for a transitional power-sharing government involving Afghan government officials and representatives of the terrorist group. Afghan President Ashraf Ghani is leery of the interim government proposal, saying any transition should reflect voters’ will in an election.

A day before Austin’s visit, the Taliban in a statement portrayed itself as having honored the Doha agreement to date.

“The Islamic Emirate of Afghanistan, which believes in the peaceful resolution of issues, will do its utmost to bring the current negotiation process to a successful and real solution,” it said.  (The “Islamic Emirate” is the term under which the fundamentalist militia ruled most of Afghanistan from the mid-1990s until late 2001.)

“In this regard, in accordance with the Doha agreement, it has fulfilled all its responsibilities. It has fulfilled its promises and reaffirmed its commitment to the important will of the Afghan people, which is peace.”

In fact, the Taliban has not fulfilled what is arguably the most significant commitment it made in the Doha agreement, to sever the relationship with al-Qaeda that led to the U.S. invasion in the first place following the 9/11 attacks.

Under the agreement, the Taliban pledged to take specific steps to ensure al-Qaeda does not again use Afghan territory to threaten the security of the U.S. and its allies.

The Taliban also committed to instructing its members not to cooperate with al-Qaeda; to preventing it from “recruiting, training, and fundraising,” and to refrain from hosting it or providing its operatives with asylum or residence, visas, passports or other legal documents.

After al-Qaeda attacked the United States on September 11, 2001, the Taliban’s refusal to hand over or eject its leaders prompted the U.S. to invade to topple the regime. U.S. forces have remained in the country ever since, in what has become America’s longest war.

Although the Taliban has refrained from attacking U.S. or coalition forces since signing the Feb. 29, 2020 accord, it continues to fight against Afghan security forces – despite calls at the Moscow conference for a ceasefire. Its website reports daily on deadly attacks against security force positions, referring to those killed by its “mujahideen” (holy warriors) as “enemy personnel,” “puppets” or “stooges.”

(At the same time it accuses “the American invaders” of carrying out airstrikes in which some of its members have been “martyred” or injured.)

The Taliban has shown little sign either of repudiating al-Qaeda or of presenting itself as a partner for peace in Afghanistan. Just two days ago, one of the Taliban websites featured images of what it called “hundreds of mujahideen and martyrdom seekers” who had graduated from military training, showing armed terrorists on foot, on horseback, and on the back of pickup trucks.

There are currently some 3,500 U.S. troops in Afghanistan, down from 12,000-13,000 personnel deployed there when the Doha deal was signed. Citing unnamed sources, NBC News reported last week that Pentagon leaders are seeking to persuade Biden to keep troops in Afghanistan beyond the Doha agreement deadline, until around November.

Biden told ABC News in an interview broadcast on Wednesday that it would be “tough” to carry out a full withdrawal by May 1, and that “I’m in the process of making that decision now as to when they’ll leave.”

Austin, who met with President Ashraf Ghani in Kabul, tweeted that his visit would help to inform his participation an administration review of Afghanistan policy, currently underway in Washington.

Following last week’s meeting in Moscow, the next step in the peace process is a U.S.-proposed, U.N.-convened conference in Istanbul, Turkey early next month.