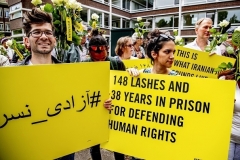 Demonstrators in the Netherlands rally outside the Iranian embassy in support of Nasrin Sotudeh, an Iranian lawyer who represented women charged for protesting the mandatory wearing of the hijab. She is serving a lengthy prison sentence for ‘security’ offenses. (Photo by Robin Utrecht/AFP via Getty Images)

(CNSNews.com) – Advocates for Iranian women’s rights on Monday slammed the regime’s recent election onto a U.N. gender equality body, and challenged democracies who took part in the secret ballot vote in New York to make their voting record public.

They said elevating Iran onto the Commission on the Status of Women (CSW) was an travesty, at a time when women are serving lengthy prison terms for the “crime” of removing their hijab – longer sentences than a man would get for cutting off his daughter’s head in an “honor” killing – and when women on death row are raped by prison guards in a bid to prevent them from going to heaven after their execution.

“If what could reasonably be called the world’s most sexist regime belongs on a U.N. commission devoted to the elimination of sexism, what is the U.N. good for exactly?” asked Iran-born pro-democracy campaigner Mariam Memarsadeghi, a senior fellow at the Ottawa-based public policy think tank Macdonald-Laurier Institute (MLI).

Memarsadeghi also challenged feminists in western countries for their silence.

“Micro-aggressions on college campuses and correct use of gender pronouns elicit more attention than millions of Iranian women denied the most basic rights as their oppressors,” she said. “Sisterhood, so it seems, is not global.”

Participants in a virtual briefing convened by U.N. Watch had strong words for democracies which, behind the cover of a secret ballot, voted to put the regime onto the CSW. They also pointed to the timing, as efforts are underway to salvage the Joint Comprehensive Plan of Action (JCPOA) nuclear deal, from which President Trump withdrew in 2018.

“That all this coincides with the active appeasement of the regime by many world powers is not an accident,” Memarsadeghi said. “The Biden administration has joined Canada and Europe in a most disciplined reticence to criticize the Islamic Republic’s mounting repression, in the hope that the lack of scrutiny will be seen by the regime as another concession to curb its nuclear program.”

Iran received 43 votes out of 53 ECOSOC ballots cast, so simple math makes clear that a handful of democracies voted for Iran to join the women’s empowerment body.

In several of the democracies concerned, lawmakers have been pressing governments to make public how they voted. Canada’s ambassador to the U.N. Bob Rae has confirmed that Canada did not vote for Iran to get a seat on the CSW.

State Department spokesman Ned Price called it “a private vote” but pointed out that the U.S. had been the one to ask that Iran’s candidacy be voted on. Had it not done so, Iran would have simply got the seat “by acclamation,” a common practice at the U.N.

Still, Price’s apparent reluctance to say unequivocally that the U.S. did not believe Iran should be on the CSW continues to draw criticism.

“I call on states that did not vote for Iran to denounce this decision,” said Kaveh Shahrooz, human rights lawyer and also a senior fellow at MLI in Ottawa. “Not the mealy-mouthed, equivocating, wordsmithing we heard from the U.S. State Department’s spokesperson Ned Price yesterday. What we are calling for a is a forceful denunciation and a true expression of revulsion.”

Shahrooz challenged democracies that voted for Iran not just to say so, but to say why.

“If you voted for Iran, say it publicly and explain to the feminists in Iran’s prisons, explain it to the girl children who are legally married off, explain to the international community why you supported this misogyny,” he said.

“If the reason they put forth for their support is that having Iran as part of the commission will improve Iran’s behavior, I challenge them to show me one example where Iran’s behavior – or the behavior of any dictatorship like Iran – is improved by engaging them in this process,” he said.

“And if the reason they supported Iran is because they want a piece of the financial benefits they may derive if there is a return to the JCPOA, then be honest and tell us that women’s rights are of no value to you.”

Gabriel Noronha, a State Department special advisor on Iran during the Trump administration, said in response to queries Monday it was “deeply troubling” that the Biden State Department would neither say how it voted, nor “criticize Iran’s accession to the committee, and hasn’t once condemned the regime’s treatment of women beyond language buried in the mandatory annual human rights report.”

“They have made no indication that they encouraged other countries to vote against Iran, which would normally be the standard protocol of the United States, which tracks these elections closely,” he said.

“To be clear, this is not an accident or an oversight, this is a conscious choice to change the United States’ policy toward Iran and remain silent.”

“My fear is that the United States will continue to sell out the Iranian people so long as they are pursuing a nuclear deal with Iran,” Noronha said. “During the Trump administration, we secured the release of two hostages even while sharply condemning and criticizing the regime for its human rights abuses. Success in negotiations does not require us to remain silent, and there is no deal that is worth halting our support of the long-suffering people of Iran.”