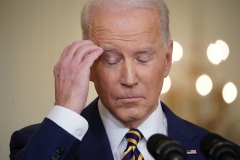 President Biden gestures during Wednesday’s press conference in the East Room of the White House. (Photo by Mandel Ngan/AFP via Getty Images)

(CNSNews.com) – The White House quickly issued a clarifying statement on Wednesday evening after President Biden during a rare press conference suggested that a “minor incursion” by Russian forces into Ukraine – as opposed to an invasion – may not prompt a unified response from the West.

Answering a question that referred to disunity among NATO allies on how to respond to Russia’s actions, Biden said, “I think what you’re going to see is that Russia will be held accountable if it invades.”

“And it depends on what it does; it’s one thing if it’s a minor incursion and then we end up having to fight about what to do and not do, etc.,” he continued, alluding to prospective differences within the alliance.

“But if they [the Russians] actually do what they’re capable of doing, with the forces amassed on the border, it is going to be a disaster for Russia if they further ingra – invade Ukraine, and our allies and partners are ready to impose severe costs, and significant harm on Russia and the Russian economy.”

After a questioner later during the press conference circled back to the “minor incursion” comment, Biden conceded that “there are differences” among NATO allies on how to respond to Russian President Vladimir Putin’s actions.

“It’s very important that we keep everyone in NATO on the same page,” he said. “And that’s what I’m spending a lot of time doing. And there are differences. There are differences in NATO as to what countries are willing to do, depending on what happens.”

“I’ve got to make sure everybody’s on the same page,” he said again moments later.

Should Russian forces cross the border and kill Ukrainian troops, Biden said, “I think that changes everything. But it depends on what he [Putin] does, as to the exact – to what extent we’re going to be able to get total unity on the Rus – on the NATO front.”

Critics viewed the “minor incursion” comment as effectively giving Putin the go-ahead to take just such an action.

Rep. Michael McCaul (R-Texas), ranking Republican on the House Foreign Affairs Committee, called the remarks “nothing short of a disaster.”

“He shared the potential disunity of Western nations on tough sanctions and clearly gave Vladimir Putin the green light to launch a ‘minor incursion,’” McCaul said.

“American credibility with our allies and adversaries alike is hanging in the balance. Rather than promising to act only in the event of a major renewed invasion, what is needed is strong U.S. leadership to rally a punishing response to Vladimir Putin’s aggression right now. I fear this president is not up to the task and he is inviting aggression, not deterring it.”

“This administration must be clear that ANY Putin move into Ukraine is unacceptable, and we should do more to impose costs on him,” tweeted Senate Armed Services Committee ranking member Sen. Jim Inhofe (R-Okla.), describing Biden’s remarks as “weak” and “incoherent.”

“Imagine being Vladimir Putin and contemplating invading Ukraine,” commented former ambassador to the U.N. Nikki Haley, a potential GOP 2024 presidential candidate. “Then you see this train wreck of a press conference broadcasting Biden’s weak leadership. Biden is emboldening Putin. This is so embarrassing.”

In his reaction, McCaul also charged that attempts by White House staff “to clean up his very clear statements are an ever further distraction to this dire situation.”

In a statement sent out shortly after the press conference ended, White House press secretary Jen Psaki said Biden had made clear to Putin that “[i]f any Russian military forces move across the Ukrainian border, that’s a renewed invasion, and it will be met with a swift, severe, and united response from the United States and our allies.”

“President Biden also knows from long experience that the Russians have an extensive playbook of aggression short of military action, including cyberattacks and paramilitary tactics,” she added. “And he affirmed today that those acts of Russian aggression will be met with a decisive, reciprocal, and united response.”

‘Speaking and acting as one’

Biden’s admission of differences among NATO allies struck a jarring note, since Secretary of State Antony Blinken and other senior administration officials have been at pains to stress that the allies are aligned on the matter.

Speaking in Kyiv just hours before Biden’s press conference, Blinken said that he has been in “very close consultation with European countries” and in the event of further Russian aggression against Ukraine “we will act strongly, in a coordinated manner, to impose those consequences on Russia.”

In a podcast interview earlier, Blinken expanded on the unity among allies and partners that is a top priority for the administration’s foreign policy.

“One of the reasons that we’ve spent so much time the first year of this administration trying to reinvest in and reinvigorate our alliances and partnerships is precisely so, on these big issues, the rest of the world hears us speaking and acting as one,” he said, with reference to the Ukraine-Russia situation. 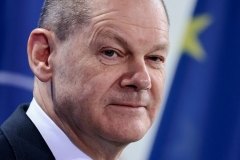 Germany, Europe’s largest economy and a leading consumer of Russian natural gas, accounts for the biggest concern when it comes to the “differences” within NATO referred to by Biden.

Chancellor Olaf Scholz (SPD) maintains that the project is purely an “economic venture,” despite geopolitical dimensions that are evident to many Western leaders – and to his own Green coalition partners.

German objections were also reportedly behind a recent decision by the West to back away from plans to include in a proposed sanctions package a move to exclude Russia from the global payment system SWIFT, a step that would have a major impact on Russian banks and exporters.

A senior State Department official briefing on Blinken’s travels in Europe this week was asked about reported reluctance in Germany to back the SWIFT proposal, but pushed back on the notion of disunity.

“Germany has been a terrific partner for us as we have been putting together this deterrence package of financial sanctions, export controls,” the official said, noting too that Germany was a member of NATO, the European Union, and the G7, all of which have issued statements warning against Russian aggression in Ukraine.

“Germany was a party to all of those statements and I do believe is fully aligned with the United States in believing that we need to meet any further military aggression in Ukraine by Russia with those sorts of measures that we have not considered before.”