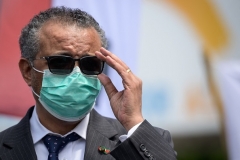 (CNSNews.com) – The World Health Organization, which moved quickly early last year to discourage the use of terms like “China” or “Wuhan” coronavirus to describe the pathogen that first emerged in Wuhan, China, is now asking people not to name the virus’ variants after the countries where they were first detected.

When WHO Director-General Tedros Adhanom Ghebreyesus on February 11 last year first announced the formal name being given to the coronavirus (SARS-CoV-2) and the disease it causes (COVID-19), he stressed the need to avoid stigmatization.

“We had to find a name that did not refer to a geographical location, an animal, an individual or group of people,” he said at the time.

Politicians and media outlets were largely compliant, and when President Trump and Secretary of State Mike Pompeo used terms like the “Wuhan virus” they drew strong criticism. (The CCP organ Global Times described Pompeo’s reference to the “Wuhan virus” as “rude and vicious.”)

“So you can use the name of the nation where it comes from, so long as that nation is not China. Got it.”

WHO officials have raised the issue before, but it was only on Monday – more than a year since a variant was first detected in South Africa -- that the agency announced it “has assigned simple, easy to say and remember labels for key variants of SARS-CoV-2,” based on letters of the Greek alphabet.

From now on, the WHO wants people to use the names Alpha, Beta, Gamma, and Delta when referring to the variants first documented in South Africa, the U.K., Brazil, and India respectively.

(As future variants emerge, they will presumably be labeled Epsilon, Zeta, etc. If the number reaches 14, the letter is Xi – pronounced “kzai” but spelled like the English rendering of the surname of the Chinese president.)

The WHO said the simply names would not replace the existing scientific ones, but they “can be difficult to say and recall, and are prone to misreporting.” (For example, the Nextstrain clade name for the variant that emerged in Brazil last fall is 20J/S:501Y.V3.)

“As a result, people often resort to calling variants by the places where they are detected, which is stigmatizing and discriminatory. To avoid this and to simplify public communications, WHO encourages national authorities, media outlets and others to adopt these new labels.”

The agency said the new system was decided upon “after wide consultation and a review of many potential naming systems,” the WHO having convened an expert group of partners from around the world for that purpose.

Among those who took issue with referring to China or Wuhan in connection with the virus that emerged in that country and city was 2020 Democratic presidential candidate – now vice president – Sen. Kamala Harris (D-Calif.).

In May last year Harris led a group of Democrats in introducing a resolution stating that the use of labels such as “Chinese Virus” and “Wuhan Virus” was perpetuating “anti-Asian stigma.”

After taking office President Joe Biden issued a presidential memorandum directing federal agencies “to ensure that official actions, documents, and statements, including those that pertain to the COVID-19 pandemic, do not exhibit or contribute to racism, xenophobia, and intolerance against Asian Americans and Pacific Islanders.”

“The Federal Government must recognize that it has played a role in furthering these xenophobic sentiments through the actions of political leaders, including references to the COVID-19 pandemic by the geographic location of its origin,” Biden said.

“Beijing must have been cheering,” Claremont Institute senior fellow Ben Weingarten commented in an op-ed reacting to the executive action.

“Notwithstanding that viruses are historically labeled by their place of origin, China is not a race and the administration fails to substantiate the claim that officials' calling of the virus by its proper name provoked hateful and/or violent actions, what makes the executive action particularly troubling is that it serves Communist China’s wishes,” he argued.

Meanwhile, at White House briefings, routinely labeling variants after the U.K., South Africa, or India does not appear to have been a problem for many, including chief medical adviser to the president Anthony Fauci, senior advisor for COVID response Andy Slavitt, and various reporters.

Last January, WHO infectious diseases epidemiologist Maria Van Kerkhove at a meeting referred to concerns about linking variants to countries when labeling them.

“We would like this nomenclature to be easily understood and not include country names, because we want to remove any of the geopolitical issues,” she said. “We are trying to avoid the ‘U.K.’ variant, the ‘South African’ variant, the ‘Brazil’ variant – and there will be more variants.”

See also:
China Bristles at Pompeo’s References to ‘Wuhan Coronavirus’; Don't Call It 'Wuhan' (Mar. 9, 2020)
Linking the Coronavirus to China is ‘Racist’?  Numerous Diseases Have Been Named For Places (Mar. 11, 2020)