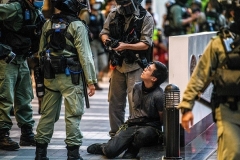 Hong Kong police arrest a protester during a rally against the new Beijing-imposed national security law on July 1, the 23rd anniversary of the city’s handover from Britain to China. (Photo by Anthony Wallace/AFP via Getty Images)

On two occasions last week, the U.N.’s top human rights body witnessed the spectacle of allies rallying around China, in what appeared to be orchestrated campaigns to fend off criticism from democracies.

In a separate initiative, 46 countries led by Belarus backed Beijing’s policies in Xinjiang province, where it stands accused of the mass incarceration and repression of minority Muslims.

In both instances, those backing China include some of the world’s most repressive autocracies, along with other countries economically beholden to Beijing, especially through its giant international infrastructure program known as the Belt and Road Initiative.

Of the 46 countries that supported China on Xinjiang, 22 are members of the Organization of Islamic Cooperation (OIC), a bloc of Muslim-majority countries which in other contexts vocally criticizes what it views as the mistreatment of Muslims in non-Islamic countries.

In Xinjiang, more than a million Muslim Uighurs have reportedly been incarcerated in re-education camps, widespread surveillance is enforced, and according to recent reports China is overseeing a deliberate campaign of coerced sterilizations of Uighur women of child-bearing age.

The move echoes a similar one last summer, when 37 countries signed a letter delivered at the HRC praising Beijing’s policies in Xinjiang, and supporting China’s assertion that the camps there are benign “vocational education and training centers.” On that occasion, more than half of the supporting countries were OIC members.

The Hong Kong-related statement in support of China was read out by Lisandra Astiasaran Arias, a delegate of Cuba’s communist regime, on behalf of 53 countries.

The logo of the United Nations is visible in the Human Rights Council chamber in Geneva. (Photo by Fabrice Coffrini/AFP via Getty Images)

“In any country, the legislative power on national security issues rests with the state, which in essence is not a human rights issue and therefore not subject to discussion at the Human Rights Council,” she said.

“We reiterate that Hong Kong is an inseparable part of China, that Hong Kong affairs are China’s internal affairs that brook no interference by foreign forces,” Astiasaran said.

Critics led by the U.S. and Britain say the Hong Kong legislation, which targets acts of subversion, secession, terrorism, and colluding with foreign forces, blatantly violates China’s treaty commitments to allow the territory significant freedoms and autonomy for 50 years.

The legislation, which came into effect on June 30, has raised deep concerns within Hong Kong, where one leading pro-democracy party quickly disbanded itself and a prominent activist left the territory, fearing a crackdown.

The first arrests of people promoting greater autonomy began within hours of the law taking effect, and the public library system began to withdraw books by pro-democracy figures.

“We urge the Chinese and Hong Kong governments to reconsider the imposition of this legislation and to engage Hong Kong’s people, institutions and judiciary to prevent further erosion of the rights and freedoms that the people of Hong Kong have enjoyed for many years,” the statement said, also referring to the troubling situation in Xinjiang.

At a press briefing in Beijing Friday, foreign ministry spokesman Zhao Lijian voiced satisfaction over the support for China’s stance on Hong Kong.

In response to the supportive statement on Xinjiang, Zhao said that, “in response to several countries’ practice of hyping up Xinjiang-related human rights matters on multilateral occasions, a large number of friendly nations and developing countries have been voicing their support for China’s achievements.”

The Trump administration withdrew from the HRC two years ago, citing a disproportionate focus on Israel, and the fact that countries with poor human rights records keep getting elected onto the council.