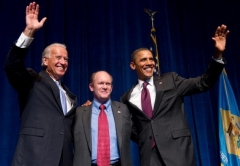 (CNSNews.com) – Sen. Chris Coons (D-Del.), whose name is among those being floated as a possible pick for secretary of state in a Biden administration, said Thursday he has received “dozens of calls” from foreign ambassadors puzzled about the situation in Washington, and “simply trying to figure out how to appropriately communicate” with Joe Biden.

“There are dozens of countries that are trying, whose heads of state are trying, to reach the president-elect and offer their congratulations and begin conversations,” Coons told CNN’s Christiane Amanpour. “I’m a senator; I’m not a member of the incoming administration. And I have gotten dozens of calls from concerned ambassadors, simply trying to figure out how to appropriately communicate.”

“This is puzzling many of our key allies, and it is sending the wrong message,” he said of the fact President Trump has mounted legal challenges in several battleground states and has not conceded the race.

“It is encouraging autocrats and authoritarian leaders around the world who resist accepting free and fair elections and resist peaceful transitions of power,” Coons said. “We’re setting a bad example. And that’s, frankly, the most likely lasting consequence of this period.”

Amanpour opined that “a lot of people are beginning to get a little bit tired” of the fact that few Republican lawmakers have spoken out publicly about a need for Trump to concede.

“You know, yes he got 71 million votes, but, as I have said, you know, the majority of Americans believe in the result,” she continued. “There haven’t been, you know, people out in the streets protesting. At what point does President-elect Biden, or you yourself, you know, ask these Republicans to come out and do the right thing? And what are they afraid of?”

Coons said he has been actively asking Republicans to “do the right thing.” He argued that Republicans were afraid of “their own voters” and fearful that Trump “may well attack them directly, as he has virtually any Republican who steps outside of the sort of accepted narrative of Trump world.”

Coons said the situation was making a transition more challenging that it would otherwise be.

“The challenge here is getting off on the right foot for a new administration in terms of setting the table, engaging in – engagement and outreach,” Coons said.

Biden has in fact had phone conversations with a number of foreign leaders, including the presidents of France, South Korea, the prime ministers of Britain, Australia, Ireland and Japan, the German chancellor, as well Pope Francis,

Asked by Fox News’ Bret Baier earlier this week if he thought it was improper for foreign leaders to be reaching out to Biden, Secretary of State Mike Pompeo replied, “If they’re just saying ‘hi,’ I suppose that’s not too terribly difficult. But make no mistake about it: We have one president, one secretary of state, one national security team at a time. It’s appropriate that it be that way.”