(CNSNews.com) – President Biden has “bloody hands” and the Austrian government is accursed for supporting Israel in its conflict with Hamas, Turkish President Recep Tayyip Erdogan said in a fiery televised speech on Monday.

Citing news reports about a potential U.S. arms sale to Israel (proposed before the current escalation), Erdogan accused Biden of “writing history with your bloody hands in these events of seriously disproportionate attacks on Gaza that have caused the martyrdom of hundreds of thousands [sic] of people.”

He also pointed to President Trump’s 2017 recognition of Jerusalem as Israel’s capital, saying the decision “has increased the appetite of this murderous state to spill blood.”

Turning on Austria, Erdogan said the European country should be “cursed” after its government flew an Israeli flag from its chancellery in support of the Jewish state under Hamas rocket fire.

“Flying a flag of a terrorist state from an official building amounts to living under the projection of terrorism,” he said.

“I curse the Austrian state. It seems to be trying to make Muslims pay for genocide to which it subjected Jews,” Erdogan added, referring to Austria’s role in the Nazis’ attempt to wipe out Europe’s Jews during World War II. 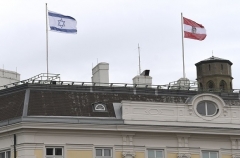 Israel’s national flag flies alongside Austria’s on the federal chancellery in Vienna on Friday. (Photo by Helmut Fohringer/APA/AFP via Getty Images)

The intemperate remarks from Erdogan directed at Biden, the leader of a NATO ally, and at a member of the European bloc which Ankara aspires to join, come at a time when the autocratic Islamist politician is seeking once again to position himself as the champion of the Palestinian cause.

Erdogan is a longstanding and vocal supporter of Hamas, and Turkey’s relationship with Israel has lurched from one crisis to another during his tenure as prime minister and then president.

Erdogan’s relationship with the U.S. has also been plagued by disputes over a range of issues, including his purchase of a Russian missile defense system, Turkey’s frustration at successive U.S. administrations’ refusal to extradite the U.S.-based cleric and Erdogan critic Fethullah Gulen, Turkey’s anger over the U.S. support for Syrian Kurdish fighters Ankara regards as terrorists, and Biden’s recent Armenian genocide recognition.

Erdogan’s attack on Biden comes less than a month before the two are scheduled to meet at a NATO summit in Brussels on June 14.

The diplomatic row with Austria began after Chancellor Sebastian Kurz and Foreign Minister Alexander Schallenberg hoisted Israel’s national flag over the chancellery and foreign ministry on Friday in a show of support.

“In the face of relentless rocket attacks on Israel, we stand in solidarity with our Israeli partners,” tweeted Schallenberg. “Our support for Israel‘s security is unwavering.”

(Czech President Milos Zeman flew the Israeli flag over Prague Castle the same day, and a landmark tower in the city was lit up in blue and white.)

Erdogan’s spokesman Ibrahim Kalin called the Austrian move “disgraceful” and Turkish Vice President Fuat Oktay charged that it was “reinforcing the Islamophobia and fascism that are increasing in Europe.”

The Turkish government also bristled at criticism on Monday from Austrian Interior Minister Karl Nehammer, who accused Erdogan of playing an “inglorious” role in the Mideast tensions, with rhetoric contributing to the escalation and “adding fuel to the fire.”

Nehammer accused Turkey of influencing anti-Israel demonstrations in Austria, and pointed to the appearance of numerous Turkish flags at rallies. (Turks comprise the biggest ethnic minority in Austria, accounting for between 4.5-5.5 percent of the population.)

Turkish foreign ministry in response condemned Nehammer’s “unfounded statements” and said the minister should refrain from rhetoric which was damaging ties between the two countries.

In another development linked to Austria’s symbolic support for Israel, Iranian Foreign Minister Javad Zarif late last week cancelled a visit to Vienna at the last minute. Iranian media attributed the decision to unhappiness over the Israeli flag hoisting, a move which Zarif’s deputy Abbas Araghchi described on Twitter as “shocking and painful.”

Iran is Hamas’ major sponsor. On Sunday, Iranian President Hassan Rouhani and Erdogan in a phone call agreed to work together “to counter the aggression and crimes of the Zionist regime,” the Iranian Mehr news agency reported.