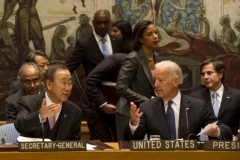 (CNSNews.com) – European Union leaders have a wish list and a message to pass along to Joe Biden – and in an apparent dig at President Trump, hijacked his best-known slogan in doing so: “We want to Make Multilateralism Great Again.”

The 27-member bloc’s executive European Commission on Wednesday unveiled proposals aimed at strengthening the transatlantic partnership under a projected Biden administration, underlining its priorities including combating climate change and a U.S. return to the World Health Organization (WHO) and the Iran nuclear deal.

The proposals touch on the strains recent years have seen in the relationship, although without mentioning Trump by name.

“While the past years have been tested by geopolitical power shifts, bilateral tensions and unilateral tendencies, the victory of President-elect Joe Biden and Vice President-elect Kamala Harris, combined with a more assertive and capable European Union and a new geopolitical and economic reality, present a once-in-a-generation opportunity to design a new transatlantic agenda for global cooperation based on our common values, interests and global influence,” the document declares.

E.U. foreign policy chief Josep Borrell told a briefing in Brussels that “the U.S. has been demanding for the European Union to take more responsibility for its own matters and this – that’s what we want to do.”

Borrell, a Spanish socialist and former foreign minister, later referred again to difficulties of recent years, citing “the rise of China” and Britain’s departure from the E.U., but again not mentioning Trump.

“The last years were a bumpy road and we are not going back to the way we were five years before,” he said. 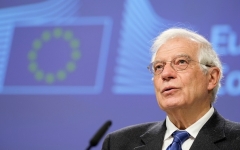 Asked about communications with the Biden team, Borrell acknowledged the sensitivities involved in doing so during a transition.

Borrell said the same thing applied to Biden nominees for positions that require Senate approval – a likely reference among others to Tony Blinken, Biden’s pick for secretary of state.

“We have to take the [confirmation] hearings very seriously,” he said. “The Americans have their procedures and we have to respect them.”

The proposed “E.U.-U.S. Agenda for Global Change” will be discussed by E.U. foreign ministers at a meeting on Monday, and then by heads of state later next week. Brussels hopes to launch the roadmap at an E.U.-U.S. summit in the first half of next year.

The E.U. is inviting the U.S. to join global coronavirus response efforts – specifically COVAX, an initiative co-led by the WHO aimed at developing, manufacturing and distributing a vaccine globally. It also wants the U.S. to work with the E.U. to “reinforce and reform” the WHO. Trump this year accused the WHO of being overly deferential to China, and announced plans to withdraw.

Describing climate change and biodiversity loss as “the defining challenges of our time,” the document says “the E.U. is proposing to establish a comprehensive transatlantic green agenda, to coordinate positions and jointly lead efforts for ambitious global agreements, starting with a joint commitment to net-zero [carbon] emissions by 2050.”

The E.U. wants to work with the U.S. to lead WTO reform efforts, resolve “bilateral trade irritants through negotiated solutions,” establish a joint E.U.-U.S. trade and technology council, and initiate a bilateral dialogue on “the responsibility of online platforms and Big Tech.”

The E.U. says it hopes to “play a full part” in the summit of democracies Biden has pledged to convene during his first year in office. (Biden said he would “bring together the world’s democracies” with a focus on fighting corruption, countering authoritarianism, and advancing human rights.)

The E.U. says it’s “ready to fulfil its [defense] responsibilities, enhance its strategic autonomy and ensure better burden-sharing,” and wants to establish an “E.U.-U.S. security and defense dialogue.”

“As open democratic societies and market economies, the E.U. and the U.S. agree on the strategic challenge presented by China’s growing international assertiveness, even if we do not always agree on the best way to address this,” the document states. It says the new E.U.-U.S. Dialogue on China, proposed by Secretary of State Mike Pompeo in June and launched in October, will “provide a key mechanism for advancing our interests and managing our differences.”

The E.U. wants to join forces again with the U.S. to “preserve” the Joint Comprehensive Plan of Action (JCPOA) nuclear deal. “I have been working to keep this JCPOA agreement from dying,” Borrell told the briefing. “I think it is the only way to avoid Iran becoming a nuclear power.”

The Obama-era JCPOA offered Tehran sanctions relief in return for curbs on its nuclear energy program, in a bid to prevent the regime from acquiring nuclear weapons. Critics called into question “sunset” clauses, under which key provisions expire after 10-15 years; concerns about verification, given Iran’s refusal to allow foreign inspectors free access to its military sites; and the fact the accord did not cover ballistic missiles and other troubling regime behavior in the region. Trump called it the worst deal he had ever seen, and withdrew in mid-2018.

Biden told New York Times columnist Thomas Friedman this week he aimed to return the U.S. to the JCPOA, but would then launch negotiations dealing with other concerns about Iran’s behavior.

He also said, in reference to China policy particularly, that “It’s going to be a major priority for me in the opening weeks of my presidency to try to get us back on the same page with our allies.”

See also:
Pompeo Derides ‘Multilateralism for the Sake of Hanging Out With Your Buddies at a Cool Cocktail Party’ (Nov. 25, 2020)