(CNSNews.com) – Hours before President Biden was due to fly from Israel to Saudi Arabia, the kingdom early on Friday announced it was opening its airspace to “all air carriers,” citing a desire to comply with non-discrimination provisions of a 78-year-old global convention.

Although the brief Saudi statement did not mention the word “Israel,” the policy change will end restrictions on Israeli commercial aircraft crossing Saudi airspace that have been in place since the creation of the State of Israel in 1948.

The Biden administration welcomed the move, which National Security Advisor Jake Sullivan described as “the result of the president’s persistent and principled diplomacy with Saudi Arabia over many months, culminating in his visit today.”

Biden was due to fly directly from Tel Aviv to Jeddah mid-afternoon local time, for bilateral meetings with Saudi leaders later Friday and to attend a summit on Saturday of Gulf and neighboring states.

Friday’s airspace announcement marks another small step in a slow-moving process of developing ties between Israel and the Arab world’s most powerful country, a nation that wields outsized influence in the Muslim world due to the location of Islam’s two most revered sites.

The announcement by the Saudi civil aviation authority said the decision was based on the kingdom’s “keenness to fulfil its obligations under the Chicago Convention of 1944, which stipulates non-discrimination between civil aircrafts used in international air navigation.”

It also aimed to “complement the efforts aimed at consolidating the kingdom’s position as a global hub connecting three continents and to enhance international air connectivity,” it said.

Saudi Arabia ratified the Chicago Convention in 1962, but due to its non-recognition of Israel prohibited aircraft flying to or from Israel from crossing its airspace. (The same restrictions apply in a number of other countries hostile to Israel, including Iran, Iraq, Syria, Lebanon, Afghanistan, and Pakistan.)

A softening began in 2018, when Riyadh gave overflight permission for Air India planes heading to and from Israel.

Then came the Trump-brokered “Abraham accords,” which saw Israel normalize relations with the United Arab Emirates, Bahrain, Sudan, and Morocco. In the fall of 2020, Saudi Arabia began to allow Israel’s national carrier El Al to cross its airspace via a designated air corridor when flying to and from the UAE.

Friday’s announcement will broaden that permission, potentially cutting by hours flights between Israel and destinations in Asia. (Previously, flights to Asia had to follow the Red Sea south from Israel and skirt the Arabian Peninsula before heading east. Others flew north across Turkey, then over the Caucasus and Central Asia.)

Israel had hoped that Saudi Arabia would join the widening circle of normalization – a process facilitated by a shared perception of the security threat posed by Iran – but movement has been slow.

Another step was taken Thursday when Israel reportedly approved an agreement to transfer two small but strategically-located islands in the Red Sea from Egyptian to Saudi sovereignty.

Under the 1979 Israel-Egypt peace agreement Israel ceded control of the islands to Egypt with the sides agreeing they be demilitarized and a multinational observer presence be installed.

Axios reported that Israel signed off on a deal that would move the observers to the Sinai Peninsula, where the Multinational Force and Observers mission has been located since 1981.

That would enable the islands to be transferred to Saudi Arabia, in line with an Egyptian-Saudi maritime agreement finalized in 2017 but held up because of the security complications. 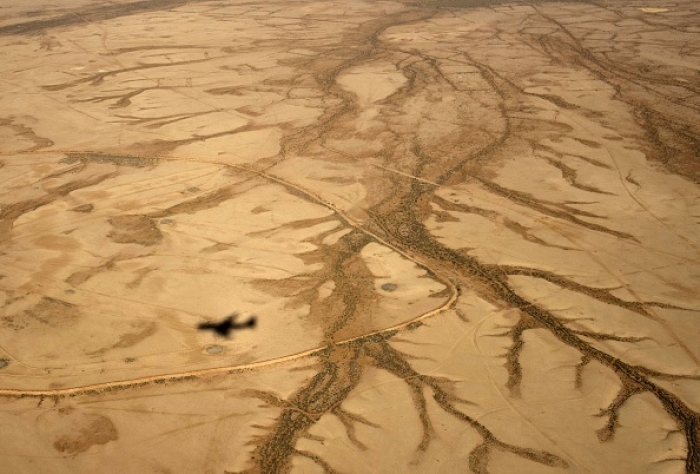 The shadow of Air Force One, seen over the desert of Saudi Arabia in 2015, as President Obama flies towards Riyadh to meet with the newly-enthroned King Salman. (Photo by Saul Loeb/AFP via Getty Images)

Biden on Friday noted the symbolic significance of his flight to the kingdom.

“Today, I will be the first president of the United States to fly from Israel to Jeddah, Saudi Arabia,” he said in a statement.

“As we mark this important moment, Saudi Arabia’s decision can help build momentum toward Israel’s further integration into the region, including with Saudi Arabia.”

Earlier, Biden said alongside Israeli Prime Minister Yair Lapid that he would carry with him to Saudi Arabia “a message of peace and extraordinary opportunities that a more stable and integrated region could bring to the region and, quite frankly, the whole world.”

He said he “strongly” supports the Abraham accords, which “deepen Israel’s integration into the broader region and establish lasting ties for business, cooperation, and tourism.”

He urged the president to take with him a message to the Saudis, and also to the other leaders at the summit whose countries do not have relations with Israel – Qatar, Kuwait, Oman, and Iraq.

“Our hand is outstretched for peace,” Lapid said. “We are ready to share our technology and experience, ready for our people to meet and learn about one another, ready for our scientists to collaborate and our businesses to cooperate.”