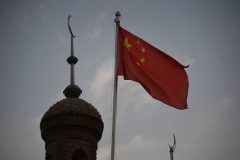 (CNSNews.com) – In the last of a series of parting blows aimed at Beijing, the Trump administration on Tuesday declared that the Chinese Communist Party’s actions against Uyghurs Muslims constitute crimes against humanity and “genocide,” becoming the first government in the world to make such a determination.

The Council on American-Islamic Relations (CAIR), an advocacy group which on most issues is a strident critic of the outgoing administration’s policies, was among those praising the decision, saying it welcomed “our government’s decision to finally and officially declare China’s heinous actions against Uyghurs Muslims as genocide.”

While the U.S. has led international condemnation of China’s treatment of Uyghurs and other minority Muslim communities, Beijing’s polices in its Xinjiang region have drawn support at the U.N. from scores of countries, including some of the world’s leading Islamic nations –  a stance attributed largely to the significant economic leverage wielded by China.

Secretary of State Mike Pompeo said in a statement that the CCP-controlled state has, since at least March 2017, “committed crimes against humanity” in Xinjiang, including arbitrary imprisonment and deprivation of liberty affecting more than a million people, torture, forced sterilization, forced labor, and “draconian restrictions on freedom of religion or belief, freedom of expression, and freedom of movement.”

In a second determination, Pompeo said the actions constitute genocide.

“I believe this genocide is ongoing, and that we are witnessing the systematic attempt to destroy Uyghurs by the Chinese party-state,” he said. “The governing authorities of the second most economically, militarily, and politically powerful country on earth have made clear that they are engaged in the forced assimilation and eventual erasure of a vulnerable ethnic and religious minority group, even as they simultaneously assert their country as a global leader and attempt to remold the international system in their image.”

Early reaction from Beijing came in the form of several undiplomatic tweets.

“Pompeo’s so-called determination is NULL & VOID,” said Chinese foreign ministry spokeswoman Hua Chunying. “Not worth the paper it’s written on. Because he is so NOTORIOUS for LYING & CHEATING. Btw, he is INDEED successful in making himself ‘the Clown of the Century’!”

Also on Twitter, the editor of the CCP organ Global Times called it “shameful” for the U.S. to “label peaceful governance in Xinjiang genocide,” and in a dig at Pompeo jeered, “you are still going to be kicked out of your office today.”

A Chinese paramilatary police patrol passes a Uyghur mother and child on a street in Urumqi, capital of Xinjiang region. (Photo by Peter Parks/AFP via Getty Images, File)

Secretary of State-nominee Tony Blinken said during his Senate confirmation hearing that he agrees with Pompeo’s assessment: “That would be my judgment as well.”

“The United States does not apply these terms lightly,” said House Foreign Affairs Committee ranking member Michael McCaul (R-Texas). “I hope today’s designation will motivate the nations, businesses, and people of the world to reconsider the ways they entangle themselves with a brutal, communist dictatorship that is guilty of committing genocide against its own people.”

McCaul chairs a Republican China Task Force in the House, which last year urged the State Department to assess whether genocide was being committed in Xinjiang.

‘You have to be right’

Along with praise for Pompeo’s announcement, critics complained that the decision had taken too long in coming, with some accusing the outgoing administration of trying to complicate China relations for the incoming one.

“What took so long is when you do something like this, you have to be right,” Pompeo told Fox News in response to a question on the time taken.

“There were lots of vigorous discussions all across the United States government. We talked with people all across the world. We relied on facts that came from nongovernmental organizations, journalists, other governments, to make sure that we had everything just right. And we wouldn’t have done this if we weren’t convinced that these declarations, this determination that I have issued today, was proper, appropriate, and would hopefully lead to better lives for people in this region.”

Such determinations are not made lightly, or often. Genocide is defined in international law as the intent to destroy a national, ethnic, racial or religious group, accompanied by atrocities aimed at achieving that goal. In U.S. law, title 18 section 1091 of the U.S. Code refers to acts with a “specific intent to destroy, in whole or in substantial part, a national, ethnic, racial, or religious group as such.”

The last U.S. genocide determination was the Obama administration’s finding in March 2016 relating to ISIS atrocities against Christians, Yazidis and other religious minorities in areas under its control.

Some voices in Congress had been calling for that determination for several years, and it came only after lawmakers inserted a requirement in an omnibus spending bill signed into law in late 2015.

Asked in March 2016 why Secretary of State John Kerry looked set to miss a 90-day congressionally mandated deadline for the determination, his spokesman said the process was, “by its nature, a very rigorous one.”

“The secretary has urged his team here at the department as well as the broader intelligence community, and even the NGO community, to provide as much information and evidence as possible so that he can make the best decision possible,” Mark Toner said at the time. “And if this has delayed the process, we believe it’s worth it.”

Kerry made the deadline, with just hours to spare. The Trump administration reaffirmed the ISIS genocide finding the following year.

China Thanks 36 Countries, Half of Them Islamic States, for Praising Its Uighur Policies (Jul. 15, 2019)