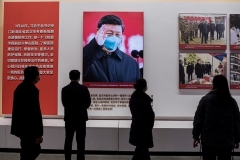 An image of Chinese President Xi Jinping features in an exhibition in Wuhan about China’s response to the coronavirus outbreak. (Photo by Nicolas Asfouri/AFP via Getty Images)

(CNSNews.com) – International experts probing the origins of the novel coronavirus are holding virtual meetings from their Wuhan hotel rooms as they work their way through a mandatory 14-day quarantine period which began last Thursday, after the Chinese government eventually allowed the team to enter the outbreak epicenter city.

More than a year since it first emerged in the Chinese city, and with more than two million deaths worldwide now attributed to the disease known as COVID-19, the World Health Organization-convened team faces the challenge of determining how, where, and when the virus crossed from animals to humans.

Tweeting from his hotel room, an American among the 15 team members, emerging disease and pandemic expert Dr. Peter Daszak, said day four of quarantine would like the previous ones be “packed” with virtual meetings.

Last week the team leader, WHO food safety and animal diseases expert Peter Ben Embarek, said that after the quarantine period “we will be able to move around and meet our Chinese counterparts in person and go to the different sites that we want to visit.”

The aim, Embarek said, was “to get a better understanding of what happened” in late 2019, including looking in more detail at the initial cases, and at the “famous Wuhan market,” trying to determine “everything that went in and out” of it in the weeks leading up to the outbreak.

He said the team would also try to track cases earlier than the first ones recorded in Wuhan in early December, in the hope of establishing how, when and where the virus “jumped into the human population.”

"We know the virus originated in bats at some point, and then we know that human cases appeared in Wuhan in December [20]19, but what happened in between, how many other animal species were involved in between, and where, remain to be found in more detail,” Embarek explained. “We don’t really know what happened in that period of time, and that’s what we are out looking for.”

From early on, the Huanan Seafood Wholesale Market, where live wild animals were among the items of sale, was seen as a likely setting for the animal-to-human jump, or at least as a source of acceleration of the epidemic.

But questions were also raised through 2020 about the possibility of a link to the Wuhan Institute of Virology (WIV), which is China’s specialist lab studying bat and human coronaviruses – and is located just nine miles from the market.

The issue was blurred somewhat with the emergence online of unsubstantiated theories about engineered bioweapons, and plots involving Bill Gates, vaccines, and 5G towers, but in its final days, the Trump administration has doubled down on calls for investigators to look into the WIV.

Secretary of State Mike Pompeo said on Friday the U.S. government “has reason to believe that several researchers inside the WIV became sick in autumn 2019, before the first identified case of the outbreak, with symptoms consistent with both COVID-19 and common seasonal illnesses.”

He said that called into question public claims by Shi Zhengli, WIV’s senior researcher on bat-related viruses, to the effect that there had been “zero [COVID-19 or SARS-related] infection” among the WIV’s staff and students.

In a fact sheet enlarging on Pompeo’s claims, the State Department noted that accidental infections in labs in China and elsewhere have occurred in the past, “including a 2004 SARS [Severe Acute Respiratory Syndrome] outbreak in Beijing that infected nine people, killing one.”

Pompeo also drew attention to the institute’s work on the RaTG13 coronavirus, including “gain-of-function”  (GOF) experiments. GOF experiments are designed to enhance the ability of a pathogen to cause a disease. The aim of the inherently risky work is to help inform experts on the pandemic potential of an emerging virus, so as to help improve preparedness and develop countermeasures.

“Since the outbreak, the WIV has not been transparent nor consistent about its work with RaTG13 or other similar viruses, including possible ‘gain of function’ experiments to enhance transmissibility or lethality,” Pompeo said.

Pompeo, an outspoken critic of the Chinese Communist Party (CCP), made clear who he blames for the global health crisis.

“The COVID-19 pandemic was avoidable,” he said. “Any responsible country would have invited world health investigators to Wuhan within days of an outbreak. China instead refused offers of help – including from the United States – and punished brave Chinese doctors, scientists, and journalists who tried to alert the world to the dangers of the virus. Beijing continues today to withhold vital information that scientists need to protect the world from this deadly virus, and the next one.”

“Until the CCP allows a full and thorough accounting of what happened in Wuhan, it is only a matter of time until China births another pandemic and inflicts it on the Chinese people, and the world.”

Chinese foreign ministry officials have for months described China’s handling of the outbreak as transparent and effective, while trying to deflect blame by pointing to reports about possible earlier coronavirus cases in other countries.

An international investigation into the virus origins was first mandated by a WHO health assembly resolution last May. For months Beijing held up progress, mulling over its membership and “terms of reference.” It was only last Thursday that China finally allowed the team to arrive in Wuhan – and only then after WHO’s director-general on January 5 voiced public disappointment about the latest holdup.

WHO Hopes Int’l Team Probing Virus Origin Will Reach Wuhan ‘As Soon As Possible’ (Nov. 25, 2020)
US Scolds WHO Over Sluggish Approach to Investigating Origins of Coronavirus in China (Nov. 12, 2020)
Int'l Effort to Find Virus’ Origin is Being Held Up by China (Oct. 9, 2020)
Pompeo: ‘Enormous Evidence’ Coronavirus Came From Wuhan Lab; China Must Allow Experts In (May 4, 2020)