FBI: China Looking to ‘Insulate’ Economy From Sanctions That Would Follow Invasion of Taiwan 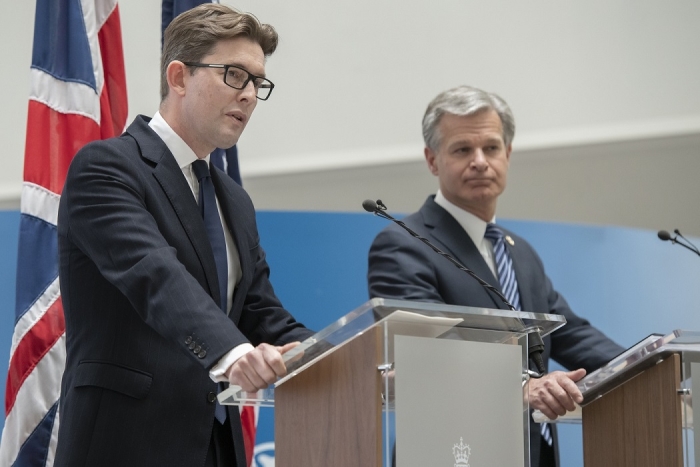 (CNSNews.com) – The Chinese government is “drawing all sorts of lessons” from the sanctions imposed on Russia over its invasion of Ukraine, and looking for ways to “insulate their economy” should Beijing face similar measures over any move on Taiwan, FBI Director Christopher Wray said on Wednesday.

“We’ve seen China looking for ways to insulate their economy against potential sanctions, trying to cushion themselves from harm if they do anything to draw the ire of the international community,” he said in a speech to business leaders in London.

“In our world, we call that kind of behavior a clue.”

If China did try to forcibly take over Taiwan, Wray said, “it would represent one of the most horrific business disruptions the world has ever seen.”

Wray noted that a recent Yale study assessed that Western businesses had lost $59 billion in Russia because of the conflict in Ukraine, and added that those losses are growing by the day.

“And if China does invade Taiwan, we could see the same thing again, at a much larger scale,” he said.

“Just as in Russia, Western investments built over years could become hostages, capital stranded, supply chains and relationships disrupted. Companies are caught between sanctions and Chinese law forbidding compliance with them.”

He was joined by Ken McCallum, the director-general of Britain’s domestic intelligence agency, MI5. McCallum said the two agencies had worked closely since both were established more than a century ago, but this was the first time their leaders had ever shared a public platform.

“We’re doing so to send the clearest signal we can on a massive shared challenge – China,” the MI5 chief said.

Wray said that while both the FBI and MI5 were “laser-focused” on the threat posed by Russia, “I want to talk today about another complex, enduring, and pervasive danger to the kinds of innovative businesses we have here in the audience: We consistently see that it’s the Chinese government that poses the biggest long-term threat to our economic and national security.”

“And by ‘our,’ I mean both of our nations, along with our allies in Europe and elsewhere.”

Wray warned the business leaders in the audience that Beijing “is set on stealing your technology – whatever it is that makes your industry tick – and using it to undercut your business and dominate your market.”

“And they’re set on using every tool at their disposal to do it,” he said, citing Chinese government intelligence operations to steal trade secrets, a massively resourced hacking program, and schemes to create business partnerships that “position their proxies to steal valuable technology.”

After the speech, Wray told reporters that he has had no reason to think that China’s “interest in Taiwan has abated in any fashion.”

But he expressed the hope that Beijing would learn lessons about what happens “when you overplay your hand,” which is what he indicated Russia had done in the case of Ukraine – “driving like-minded countries together, in a way that is pretty historic.”

Beijing views Taiwan not as a sovereign country but as a rebellious province whose return to the “one China” is inevitable, and has not ruled out the use of force if necessary to achieve that end.

The carefully-calibrated U.S. policy is that the status quo should not be altered by force, while U.S. law requires the federal government to provide Taiwan with the military means to defend itself against unprovoked aggression.

‘Develop the capability to attack Taiwan’

Tensions in the Taiwan Strait have risen to a higher degree than usual since last fall, with China significantly stepping up sorties of warplanes, including fighter jets and strategic bombers, in the skies near the island.

Rhetoric has also become more heated. President Biden raised eyebrows when, during a visit to the region in May, he replied “yes” when asked if he was willing “to get involved militarily to defend Taiwan” if China invaded. (The White House said afterwards Biden was not outlining a change in policy regarding Taiwan.)

Last month China’s defense minister warned – at an international security conference attended by Defense Secretary Gen. Lloyd Austin – that China “will fight to the very end” any attempt to “split Taiwan from China.”

Earlier this week, chairman of the Joint Chiefs of Staff Gen. Mark Milley said the U.S. was watching the situation “very closely,” but that there were no indications or warnings that a Chinese attack on Taiwan was imminent.

“In terms of capability I think China clearly is developing a capability,” Milley told the BBC.

“President Xi [Jinping] has mentioned that in public forums, he’s mentioned it in speeches, that he has challenged the PLA [People's Liberation Army] to develop the capability to attack Taiwan at some point in time,” he said.

“And whether they would or not, though, is a political choice, a policy choice. And that will be based off of how the Chinese view the cost-risk benefit at the time.”

Secretary of State Antony Blinken will meet his Chinese counterpart Wang Yi on the sidelines of a G20 ministerial in Bali this week.

Asked Wednesday if Taiwan will be discussed in the Blinken-Wang meeting, Chinese foreign ministry spokesman Zhao Lijian did not answer directly, but said that the Taiwan question “has always been the most important and sensitive issue in China-U.S. relations.

He demanded that the U.S. abide by its previous commitments regarding Taiwan, “stop encouraging and supporting Taiwan independence, and take concrete actions to safeguard the political foundation of China-U.S. relations.”