(CNSNews.com) – As the U.S. and Russia prepare for strategic talks this month on issues including Moscow’s demands for an end to NATO expansion, Finland’s leaders are sounding a warning – don’t cut us and other prospective alliance members out of the deliberations.

“We should uphold this freedom of choice and make sure it remains a reality, as this is part of every country’s right to decide on its own security policies.”

Marin stressed that Finland “will not let go of our room for maneuver.”

Biden administration officials have said repeatedly in recent weeks that the U.S. will not discuss with the Russians anything that affects its allies and partners in Europe without the input of the Europeans themselves.

The point was stressed again before and after President Biden’s phone conversation with Russian President Vladimir Putin on Thursday. 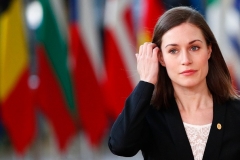 But concerns persist. In his new year’s message, Finnish President Sauli Niinisto said Europe should not be mere observers – “cannot just listen in” – while Russia and NATO and the U.S. discuss issues of European security.

“Many Europeans have asked, and not for the first time: are we being discussed without us being included?” he asked.

Niinisto said Russian “ultimatums” outlined last month, calling for binding guarantees from the U.S. and NATO that the alliance would expand no further and not deploy weaponry near Russia’s borders, were “in conflict with the European security order.”

“Spheres of interest do not belong to the 2020s,” he said, referring to the Kremlin’s desire to retain its sway over regions it dominated during the Cold War. “The sovereign equality of all states is the basic principle that everyone should respect.”

Niinisto said the Russian demands posed a challenge to the sovereignty of several European Union member-states, including Finland and Sweden. The Nordic neighbors are not member of NATO, but argue that under NATO’s “open door” policy they should be able to join should they choose to do so.

“Let it be stated once again: Finland’s room to maneuver and freedom of choice also include the possibility of military alignment and of applying for NATO membership, should we ourselves so decide,” Niinisto said. “NATO’s business is the so-called open door policy, the continuance of which has been repeatedly confirmed to Finland, also publicly.”

(Public opinion on joining NATO is divided in both Finland and Sweden, although polls in recent years suggest opposition to the move may be waning.)

Russian President Vladimir Putin during a 2017 visit to Finland. Russia has warned that its opposition to further NATO expansion covers Finland and Sweden as well as former Soviet republics. (Photo by Mikhail Svetlov/Getty Images)

Since 1999, 14 formerly communist countries have joined NATO. Putin is strongly opposed to any further expansion, particularly averse to the idea of Ukraine and Georgia, both formerly part of the Soviet Union, joining the alliance.

Those objections are a key factor in Moscow’s support for separatists in Georgia and Ukraine, and its occupation of Ukraine’s Crimea peninsula since 2014.

The current buildup of Russian forces near Ukraine’s borders has stoked fears of fresh incursions into Ukrainian territory, with Putin appearing to be using their presence as leverage as he pushes for “security guarantees” and an end to NATO enlargement.

The Biden administration and NATO secretary-general Jens Stoltenberg have rejected the notion of a Russian veto on NATO membership, which they say should be open to any qualifying aspirant.

Washington has also warned that any further invasion of Ukraine will be met by tough sanctions, the provision of additional defensive equipment to Ukraine, and new steps to bolster allies on NATO’s “eastern flank” through troop and/or weaponry deployments.

The second week of January will see three separate dialogues involving Russia and the West – Russia-U.S. strategic stability talks in Geneva, a NATO-Russia Council meeting in Brussels, and a meeting of the Vienna-based permanent council of the 57-member Organization for Security and Co-operation in Europe (OSCE).

Looking ahead to those talks, Niinisto in his new year message cited a warning by former Secretary of State Henry Kissinger, about the risks entailed in efforts to pursue peace.

“Whenever peace – conceived as the avoidance of war – has been the primary objective of a power or a group of powers, the international system has been at the mercy of the most ruthless member of the international community,” Kissinger said, evidently alluding to abortive attempts to appease Hitler in the late 1930s.

“We should maintain hope, but not succumb to mere wishful thinking,” Niinisto said.

The principle contained in Kissinger’s “cynical statement,” he added, may “be put to the test in the dialogue due to start in the second week of January.”

Russia: Our Opposition to NATO Expansion Covers Sweden and Finland Too (Dec. 27, 2021)