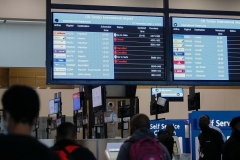 An electronic flight notice board displaying at Johannesburg’s international airport notifies passangers of canceled flights after a number of countries banned flights from South Africa over the discovery of a new omicron variant. (Photo by Phill Magakoe/AFP via Getty Images)

(CNSNews.com) – Of the eight countries in southern Africa affected by President Biden’s travel proclamation, as of Sunday five still have no confirmed cases of the omicron variant of the coronavirus.

Meanwhile another 40 countries on four continents do have confirmed omicron cases, but travel from them to the U.S. has not been barred.

In one of those 40 countries, Britain, there have been more confirmed cases of the new variant than other country barring South Africa.

A small number of cases of omicron have now been confirmed in the United States – in 16 states and counting, according to the Centers for Disease Control and Prevention. They are California, Colorado, Connecticut, Georgia, Hawaii, Louisiana, Maryland, Massachusetts, Minnesota, Missouri, Nebraska, New Jersey, New York, Pennsylvania, Utah, and Washington.

Since last Monday, the U.S. has prohibited entry to non-citizen travelers who in the two weeks before travel have been in eight southern African nations.

But of the eight countries, four – Namibia, Lesotho, Eswatini, Malawi – have no confirmed omicron cases while a fifth, Mozambique, has two suspected (but not yet confirmed) cases.

The other three countries, South Africa, Botswana, and Zimbabwe, all have confirmed cases of the variant.

White House chief medical advisor Anthony Fauci was asked about the situation during an appearance on CNN’s “State of the Union” on Sunday.

“Given that the U.S. is now imposing strict testing requirements for international travel– travelers, and given that omicron is here in 15 states, do you think it’s time to lift the bans on travel from south African countries?” Jake Tapper asked him.

“That ban was done at a time when we were really in the dark,” Fauci said. “We had no idea what was going on, except that there seemed to have been an explosion of cases of omicron in South Africa.”

“So, when the ban was put on, it was put to give us time to figure out just what is going on,” he said.

“Now, as you mentioned, as we’re getting more and more information about cases in our own country and worldwide, we’re looking at that very carefully on a daily basis.”

“Hopefully, we will be able to live that ban within a quite reasonable period of time.”

The restrictions on countries in southern Africa, which have been put into place by dozens of countries in addition to the United States, drew criticism from South Africa and from the WHO.

At a briefing in Geneva last Wednesday, director of World Health Organization (WHO) emergencies program Dr. Michael Ryan pointed out the inconsistencies of travel restrictions being implemented.

“Certainly we’ve seen a lot of inconsistency with countries, for example, in Africa, having [been] banned [for] travel and they haven’t had a single confirmed case, and other countries with confirmed cases and evidence of local transmission with no travel bans,” he said.

“I’m not saying one is right or one is wrong,” Ryan said. “What I’m saying, I can’t see the logic, certainly from a public health or an epidemiologic perspective.”

Biden last Thursday tightened up requirements for all U.S.-bound travelers, requiring them to test for infection within one day of departure, regardless of nationality or vaccination status.

But the southern African travel restrictions have not been lifted or amended.

‘The signals are a bit encouraging’

Health experts in South Africa, the U.S., and at the WHO continue to give very cautiously optimistic assessments about the variant, saying while it appears to be more contagious its effects appear to be relatively mild, and the delta variant remains the biggest threat. They warn it may be too early to tell, however.

“Thus far – though it’s too early to really make any definitive statements about it, thus far, it does not look like there’s a great degree of severity to it,” Fauci said on Sunday.

He stressed that “we have really got to be careful before we make any determination that it is less severe or it really doesn’t cause any severe illness comparable to delta.”

“But, thus far, the signals are a bit encouraging regarding the severity. But, again, you got to hold judgment until we get more experience.”

“Initial reports suggest that people with omicron tend to have more mild disease, but it’s too early to tell,” WHO infectious diseases epidemiologist Maria Van Kerkhove said on CBS News’ “Face the Nation.”

“And the reason for that is because it takes time for people to go through the full course of their infection. It may take some weeks before we actually understand how many of those individuals will go on to develop severe disease.”

Kerkhove warned that even if omicron does cause mild illness, “it’s important that we still act fast now to take measures to control its spread.”

Even a large number of mild cases will mean that some individuals will need to be hospitalized, she argued, and “more hospitalizations could mean more deaths.”

Kerkhove and Fauci both spoke in terms of omicron “competing” with the prevalent delta variant.

“The big question is whether or not omicron will outcompete delta,” she said. “Remember, delta is dominant, and that’s an extremely dangerous variant.”

Fauci said the question for the U.S. will be “what is it [omicron] going to be as it competes with a very dominant variant, delta.”