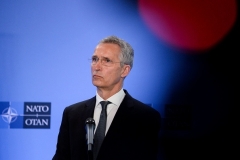 (CNSNews.com) – For many months NATO secretary-general Jens Stoltenberg has been insisting that the alliance’s ongoing military presence in Afghanistan was “conditions-based,” but after President Joe Biden on Wednesday repudiated that principle, Stoltenberg had to walk away from it too.

In conjunction with Biden’s plan to withdraw all U.S. forces before September 11, NATO ministers agreed that troops from their countries and contributing partners such as Australia and Georgia, would also leave Afghanistan according to same timetable.

Standing alongside Secretary of State Antony Blinken and Defense Secretary Gen. Lloyd Austin, Stoltenberg said the alliance faced a “dilemma” – either leave in an orderly manner, or stay and expect increased violence from the Taliban.

An agreement concluded between the Trump administration and the Taliban in February 2020 envisaged a withdrawal of U.S. forces by May 1 this year, but also set clear conditions, including a requirement that the Taliban sever the relationship with al-Qaeda that led to the U.S. invasion in the first place, following the 9/11 attacks.

After that agreement was signed in the Qatari capital, Doha, Stoltenberg regularly asserted that NATO’s presence in Afghanistan was “conditions-based,” even as he drew attention to the fact the Taliban was not complying.

He underlined three conditions relating to the Taliban’s behavior: “Taliban has to reduce violence, Taliban has to negotiate in good faith, and Taliban has to break all ties – has to stop supporting international terrorist groups like al-Qaeda.”

“We will only leave when the time is right,” he added.

On February 15, he made similar comments.

“The Taliban must reduce violence, negotiate in good faith and live up to their commitment to stop cooperating with international terrorist group,” he said. “Our presence is conditions-based.”

During a meeting of NATO defense ministers last October, Stoltenberg said, “While no ally wants to stay in Afghanistan longer than necessary, we will not leave before the time is right. And our presence is conditions-based. Any future adjustments must depend on progress in the peace talks and the conditions on the ground.”

At a press briefing ahead of that meeting, Stoltenberg again used the term several times.

And again minutes later, “We have made it very clear that our presence in Afghanistan and any future adjustment in our force levels in Afghanistan is conditions-based. We have to assess the conditions, including the Taliban has to break ties with terrorist organisations, because the reason why we went into Afghanistan was to fight terrorism, international terrorism, after the 9/11 attack on the United States.”

Ahead of Biden’s troop withdrawal announcement, however, a senior administration official shot down the “conditions-based” approach.

“This is not conditions-based,” the official said in a background briefing. “The president has judged that a conditions-based approach, which has been the approach of the past two decades, is a recipe for staying in Afghanistan forever.”

In his statement on Wednesday, the president confirmed that stance.

“If we instead pursue the approach where America – U.S. exit is tied to conditions on the ground, we have to have clear answers to the following questions: Just what conditions require to – be required to allow us to depart?” Biden asked. “By what means and how long would it take to achieve them, if they could be achieved at all?  And at what additional cost in lives and treasure?”

“I'm not hearing any good answers to these questions.  And if you can't answer them, in my view, we should not stay.”

Taking media questions in Brussels alongside Austin and Blinken, Stoltenberg was asked about the 180 degree shift.

“You have been the number one proponent of a ‘conditions-based’ withdrawal, and I think tonight is the first time I hear you speaking about Afghanistan without mentioning these famous three conditions to the Taliban,” a German reporter said. “President Biden came to the conclusion that this conditions-based approach would be ‘a recipe for staying in Afghanistan forever.’ What do you reply to him tonight?”

Stoltenberg offered a lengthy response, but one that did not mention the word “conditions,” or repeat his often-stated earlier points about the Taliban’s failure to meet its commitments.

What he did say was that, since the Doha deal was signed, “we all have faced a dilemma.”

“And it is either to leave in a orderly way, and that decision of course entails risks – and I don’t underestimate, I’m actually really clear-eyed about the challenges we’ll face.”

“But the alternative is to stay, but then we need to be prepared for a long-term, open-ended military presence, and most likely we’ll have to increase the number of NATO troops in Afghanistan to withstand increased Taliban pressure, more violence.”