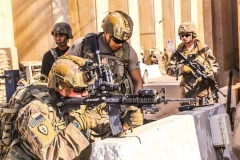 U.S. soldiers guarding the U.S. Embassy in Baghdad. (Photo by US Embassy in Iraq/AFP via Getty Images)

(CNSNews.com) – U.S. troop locations in Iraq and Syria have come under attack for three consecutive days, and the Pentagon said on Tuesday the recent formal end of the combat mission in Iraq does not mean U.S. personnel there are “under any less threat” from Iran-backed militias.

In two separate incidents on Tuesday, two explosive-laden “suicide drones” targeting U.S. troops at the Ain al-Asad airbase in western Iraq were shot down; and in eastern Syria, coalition forces targeted a site that was being prepared to launch attacks on a place called Green Village.

Pentagon Press Secretary John Kirby at a briefing on Tuesday offered few details of Tuesday’s incident in Syria, but he did say that “one of the reasons why these sites were hit was we had reason to believe that they were going to be used as launch sites for attacks on Green Village.”

“So clearly our men and women remain in harm’s way, and we have to take that threat very seriously,” he said. “We always have the right of self-defense.”

Although Kirby could not attribute specific blame, he did say that “we continue to see threats against our forces in Iraq and Syria by militia groups that are backed by Iran.”

In recent days, the U.S.-led coalition’s mission has formally transitioned from a combat operation to one purely focused on advising and assisting Iraqi forces confronting remnants of ISIS, the Sunni terrorist group that at its peak controlled large swathes of Iraqi and Syrian territory.

But with 2,500 U.S. troops still on the ground in Iraq, Iran-sponsored Shi’ite militias wanting them gone are continuing to pose a threat.

The recent events coincide with the second anniversary of the U.S. drone strike that killed Qassem Soleimani, the Iranian general who supervised operations of the Iraqi militias.

“We have consistently been concerned about the threats to our forces in Iraq by militias backed by Iran,” Kirby said. “That is not a new concern. And I think we’ve seen in just the last few days that there have been acts perpetrated by some of these groups that validate the consistent concern that we’ve had over safety and security of our people.”

Kirby said that even with the new advise-and-assist mission now underway, that “our commanders have the inherent right of self-defense.”

“And we don’t stay at this mission – this new mission – with any illusions that our people are under any less threat by these militia groups,” he said. “We’re going to stay focused on that threat as we stay focused on the mission at hand, and make sure that we’re doing everything we can to protect our people.”

Asked about this week’s foiled drone attacks, Kirby said he could not provide specific attribution, but pointed out that “these kinds of attacks are very much in keeping with the kinds of attacks we’ve seen from Iran-backed militias in Iraq and in Syria.”

“And so, obviously, our working level assumption is that such groups were responsible for these, but I don’t want to speculate beyond that. It’s in keeping with the kinds of tactics, techniques, and procedures we’ve seen from these groups in the past.”

Soleimani was killed on President Trump’s orders near Baghdad airport, together with Abu Mahdi al Muhandis, a leader of the Kata’ib Hezbollah militia.

Kata’ib Hezbollah and another of the Iranian proxy militias, Asa’ib Ahl al-Haq, are both U.S.-designated foreign terrorist organizations. U.S. commanders hold them and the Islamic Revolutionary Guard Corps – Qods Force, which Soleimani headed, responsible for the deaths of scores of U.S. troops during the Iraq War.

Marking the anniversary of Soleimani’s death, Iranian President Ebrahim Raisi said that Trump and former Secretary of State Mike Pompeo should stand trial for the killing, failing which the Islamic ummah (nation) would take revenge.

Reacting to the regime’s threat, Pompeo told Fox News’ Sean Hannity, “I wouldn’t change a thing about what we recommended to the president.”

“Qassem Soleimani was actively engaged in plotting against America. We took military action – lawful military action to make sure that no Americans were killed,” Pompeo said. “It was a good decision.”