Skip to main content
Minnesota Attorney General Keith Ellison is increasing charges against Derek Chauvin to 2nd degree murder. The other 3 officers will be arrested.

Secretary of State John Kerry, Iranian Foreign Minister Javad Zarif, and Russian, British and E.U. counterparts in Vienna on July 14, 2015, the day the JCPOA was finalized. (Photo by Joe Klamar/AFP via Getty Images)

(CNSNews.com) – As the Iranian regime prepares to resume uranium enrichment at its Fordow plant – a further move away from its commitments in the 2015 nuclear deal – Republican lawmakers Tuesday called on the administration to end waivers which critics view as keeping the agreement on life support.

Rep. Liz Cheney (R-Wyo.) and Sens. Ted Cruz (R-Texas) and Lindsey Graham (R-S.C.), who are planning to introduce legislation in the House and Senate to revoke the waivers, urged President Trump to take steps to “tear up the nuclear deal once and for all.”

It is the fourth step Iran has taken since last May to reduce its compliance with the Joint Comprehensive Plan of Action (JCPOA) agreement, struck with the Obama administration and five other governments in 2015.

Trump withdrew from the deal in May last year, and Tehran says the steps it’s taking are reversible, intended as leverage to force European JCPOA partners to keep the agreement alive.

Although the administration has continued to ratchet up pressure on the regime – most recently with new sanctions on Monday targeting supreme leader Ayatollah Ali Khamenei’s “inner circle” – it continues to permit certain waivers, intended to advance nonproliferation goals. 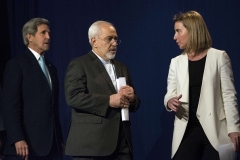 The aim of the JCPOA was to curb Iranian attempts to develop a nuclear weapons capability under the guise of a civilian program. In return for restrictions on its nuclear activities, the U.S. and its partners eased sanctions and released tens of billions of dollars in frozen assets.

The agreement also allowed ongoing international cooperation with Iran “in the field of peaceful uses of nuclear energy.”

Republicans already critical of the “civil-nuclear waiver” extensions pointed to the latest development as they renewed calls on the administration to eliminate them.

“Today’s news reports confirm what we’ve known all along: Iran has been exploiting the civil-nuclear waivers from the catastrophic Obama-Iran nuclear deal, which the Trump administration has continued to issue, to buy time and build up their nuclear facilities before openly returning to illicit activities in those very facilities,” Cheney, Cruz and Graham said in a joint statement.

“It was entirely predictable that eventually Iran would go back to enriching uranium at their Fordow nuclear bunker, which they dug out of the side of a mountain so they could build nuclear weapons,” they said. “These waivers dangerously increase the risk of proliferation and whoever is advising President Trump otherwise is doing a disservice to him and the country.”

The three said Trump should take two steps “to tear up the nuclear deal once and for all” – end the waivers, and work to invoke “snapback” sanctions at the United Nations to restore international pressure on Iran for violating the JCPOA.

(Under the deal, sanctions “snapback” requires a lengthy “dispute resolution” process in a complaint may be examined first by a joint commission, then by a group of foreign ministers, and finally by a three-person advisory board. Iran is a member of the first two bodies, and appoints one of the three advisory board members. The matter could finally end up in the Security Council.)

Last July Pompeo said the JCPOA should never have allowed Iran to enrich uranium at all, noting that six U.N. Security Council resolutions adopted since 2006 required the regime to suspend all enrichment and reprocessing activity.

A Security Council resolution in July 2015, which endorsed the JCPOA, terminated the provisions of all six of those earlier resolutions.

Centrifuges spin at high speeds to enrich uranium to varying degrees, providing fuel for nuclear reactors (3.5 percent enrichment) or, in the case of very high levels of enrichment, producing a core ingredient for an atomic bomb. The JCPOA set limits of 300 kilograms of uranium, enriched to a maximum of 3.67 percent purity.

The Fordow move is the fourth Iranian step away from compliance with the deal:

--In May, the regime said it would no longer honor the stockpile limits for uranium (300 kg) and heavy water (1.3 tons).

--In July it breached the 300 kg stockpile limit and began enriching uranium to 4.5 percent purity.

--In September, it announced it was injecting gas into advanced IR-6 centrifuges to boost its uranium stockpile. Under the deal, it was limited to operating IR-1 centrifuges, which are older and slower than IR-6s.

Trending on CNSNews
Ben Shapiro: The Controlled Burn Rages out of Control | CNSNews
Michelle Malkin: Get Up Off Your Knees | CNSNews
Rosenstein: 'Would Not' Have Signed FISA Application If He Knew Then What He Knows Now | CNSNews
Candace Owens: ‘Every 4 Years the Black Community Takes the Media Bait' | CNSNews