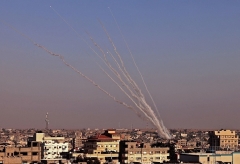 Rockets are launched towards Israel from Rafah in the southern Gaza Strip early Wednesday morning. (Photo by Said Khatib/AFP via Getty Images)

(CNSNews.com) – At a time when Iranian-backed Palestinian terrorists are firing rockets indiscriminately into Israeli cities and towns, 44 out of the 50 Republicans in the U.S. Senate wrote to President Biden on Wednesday, urging him not to give sanctions relief “to a regime that seeks to destroy Israel.”

They also called on Biden to immediately end negotiations now underway in Vienna, seeking a U.S. return to the nuclear deal with Iran which President Trump exited three years ago.

“The United States must not do anything to enrich Israel’s enemies, such as by offering sanctions relief to a regime that seeks to destroy Israel,” the senators wrote in a letter organized by Sen. Marco Rubio (R-Fla.).

Israel says Hamas and Palestinian Islamic Jihad (PIJ) have fired more than 1,500 projectiles from the Gaza Strip into Israel since Monday night, killing seven people, including a six-year-old child.

Retaliatory airstrikes which the Israeli Defense Forces (IDF) say are targeting terrorist leaders, infrastructure, and rocket launchers in Gaza have left at least 65 people dead, including children, according to Hamas authorities.

The IDF says around say 30 of those killed in Gaza since the flare-up began are militants; Hamas and PIJ have confirmed several of those deaths, including that of a senior Hamas commander.

The Iranian regime is open about its support for the two U.S.-designated foreign terrorist organizations (FTO), whose senior officials are regularly received by the leadership in Tehran.  Hamas and PIJ refer to Iran as their primary sponsor, and have attributed much of their missile capability to the regime.

In 2018, U.S. Mideast envoy Jason Greenblatt said Iran was funding Hamas to the tune of $100 million a year. 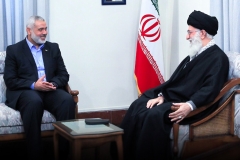 The following year it was reported the regime had offered to increase its support to $30 million a month, and Hamas Gaza leader Ismail Haniyeh last year thanked Iran for “supporting and funding the resistance financially, militarily, and technically.”

In their letter the senators noted that the violence is occurring at a time when administration officials are in talks aimed at restoring U.S. participation in the Obama-era nuclear agreement known as the Joint Comprehensive Plan of Action (JCPOA). Doing so will entail relief from some of the sanctions reimposed as a result of Trump’s withdrawal.

“In light of these recent attacks by Hamas against Israel, the United States should take all steps necessary to hold Tehran accountable and under no circumstances, provide sanctions relief to Iran,” the senators wrote. “This is especially important as Iran is supporting terrorist activity against the United States’ closest ally in the region, Israel.”

They noted the recent expressions of public support for the terrorists – and incitement against Israel – from supreme leader Ayatollah Ali Khamenei.

The senators said a U.S. return to the JCPOA would potentially mean billions of dollars in sanctions relief that “will no doubt contribute to Iran’s support of Hamas and other terrorist organizations who attack Americans and our allies.”

“We call on you to immediately end negotiations with Iran, and make clear that sanctions relief will not be provided,” they said. “Doing so would demonstrate a firm commitment to our closest ally in the region and to our own security interests.”

According to the U.S. Treasury Department, the Islamic Revolutionary Guard Corps (IRGC) and its Qods Force are the channels for Iranian “training, logistical assistance and material and financial support” for Hamas and other terrorist proxies in the region.

When the 2015 JCPOA eased U.S. and U.N. sanctions and released tens of billions of dollars in frozen assets to the regime, the Obama administration conceded that some of the money would go to the IRGC and likely end up benefiting terrorists.

In its 2019 report on “Iran Military Power,” the Defense Intelligence Agency stated that Iran’s military spending had risen significantly as a result of the sanctions relief up until 2018 – before dropping again in 2019, due to “the reimposition of U.S. oil and banking sanctions, the depreciation of the Iranian rial, and chronic economic mismanagement.”

The DIA also noted that the terrorist-sponsoring IRGC gets the lion’s share of the military spending.

“In 2019, Iran allocated 29 percent of the defense budget to the IRGC, compared with 12 percent for the Artesh [Iran’s conventional armed forces],” it said.

In recent days, senior PIJ terrorist Ramez Al-Halabi told an Iraqi television station that the rockets his group fires into Israel “have an Iranian signature on them, the signature of Qassem Soleimani.”