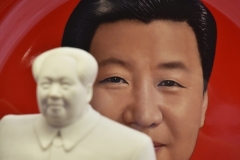 An image of Chinese President Xi Jinping is seen behind a statue of Mao Zedong at a souvenir store next to Tiananmen Square in Beijing. (Photo by Greg Baker/AFP via Getty Images)

(CNSNews.com) – The central committee of the Chinese Communist Party on Thursday endorsed a resolution highlighting the greatness of the party – and further elevating President Xi Jinping’s status as an epochal figure in the history of the People’s Republic of China.

The “Resolution on the Major Achievements and Historical Experience of the Party over the Past Century” contains no fewer than six references to Xi’s “core” position in the CCP, a party that is described as “great, glorious, and correct.”

The effusive language is not limited to the CCP but is used in connection with its leader as well.

“Comrade Xi Jinping, through meticulous assessment and deep reflection on a number of major theoretical and practical questions regarding the cause of the Party and the country in the new era, has set forth a series of original new ideas, thoughts, and strategies on national governance revolving around the major questions of our times,” it says.

According to state media the text, which was introduced at the central committee’s plenary session by Xi himself, marks only the third time in the 100 years since the CCP was founded that a “resolution on history” has been endorsed.

The previous two were issued under Mao Zedong in 1945, four years before the CCP won the civil war and founded the PRC; and in 1981, shortly after Deng Xiaoping introduced his plans to reform and liberalize the economy.

--a period of the “new-democratic revolution,” under Mao, defined by opposition to imperialism and feudalism, and the seeking of national independence and the people’s “liberation.”

--a period of socialist revolution and construction, under Mao.

--a period of reform, opening up, and socialist modernization, under Deng, Jiang Zemin and Hu Jintao.

--the new era of “socialism with Chinese characteristics,” steered by Xi.

Missing from the historical account are any references to the cost in lives and suffering of the CCP policies, the tens of millions of Chinese citizens who died of violence and starvation during the “Great Leap Forward” and Cultural Revolution, or the untold numbers or protesters killed when the military crushed pro-democracy demonstrations in Beijing in 1989.

(The only reference to the latter episode is a vague one to “complex domestic and international situations and serious setbacks confronting world socialism.”) 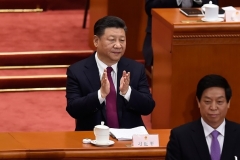 Chinese President Xi Jinping applauds during the opening session of the rubber stamp National People’s Congress in Beijing in 2018. (Photo by Wang Zhao/AFP via Getty Images)

Xi, who became CCP general secretary in November 2012 and president four months later, gets the lion’s share of attention in the resolution.

“Keeping in mind both domestic and international imperatives, the Central Committee has implemented the Party’s basic theory, line, and policy and provided unified leadership for advancing our great struggle, great project, great cause, and great dream.”

‘In preparation for the next stage’

The resolution’s evaluation of the PRC’s history includes an assessment of the People’s Liberation Army, which it says “has been through an all-around revolutionary restructuring in preparation for the next stage, while our defense capabilities have grown in step with our economic strength.”

“Our people’s military, firmly carrying out the missions of the new era, has taken concrete actions to safeguard our national sovereignty, security, and development interests with an indomitable fighting spirit.”

On one of the most sensitive areas of dispute between Beijing and the West – mass-scale atrocities against Uyghurs and other minority Muslim in Xinjiang – the resolution is silent.

It does refer to two other major issues of contention – the strangling of democracy in Hong Kong and the continuing standoff between the PRC and Taiwan.

The text says the CCP central committee has adopted “measures to address both symptoms and root causes of relevant issues” in Hong Kong and is enforcing the principle that Hong Kong “should be governed by patriots.”

“These moves have helped to restore order in Hong Kong and ensure a turn for the better in the region.”

The resolution also highlights China’s striking advances in international diplomacy, alluding to its growing influence at the United Nations and other multilateral forums.

“China has broken new ground in its diplomatic endeavors amid profound global changes and turned crises into opportunities amid complex situations on the international stage,” it says.

“These efforts have resulted in a marked increase in China’s international influence, appeal, and power to shape.”

As a result of the CCP’s endeavors, it says, the Chinese people “have been freed from bullying, oppression, and subjugation.”

The rare “resolution on history” comes a year before the CCP holds its 20th National Congress – they are held once every five years – which is expected to formalize a third term for Xi.

From 1982 until 2018, presidents could not serve more than two consecutive terms, but the term limits were abolished that year, shortly after Xi’s “socialism with Chinese characteristics” philosophy was enshrined into the party – and later, the national – constitution.

Jiang and Hu were president for 10 years each, and Deng served for 11 years as China’s paramount leader.

Xi, who is 68, looks set to retain his “core” position at the helm for considerably longer.