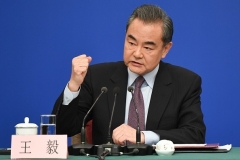 (CNSNews.com) – As the first U.N. Human Rights Council session of the Biden era got underway on Monday, China’s foreign minister took the opportunity to flatly reject U.S. claims that its security actions in the Muslim-majority region of Xinjiang amount to genocide.

China was elected onto the U.N.’s top human rights forum last fall for a new three-year term. In Beijing on Monday, foreign ministry spokesman Wang Wenbin noted that this was China’s fifth term on the 15-year-old HRC, “which testifies to the international community's recognition of China’s human rights cause.”

The Biden administration this month reversed its predecessor’s policy and renewed engagement with the HRC, arguing that it can best encourage reforms from within. It is taking part in the current session as an observer, but is expected to run for a seat in elections next fall.

Despite global condemnation over the situation in Xinjiang, the crisis does not feature on the HRC’s agenda during the month-long, mostly virtual session.

Still, Foreign Minister Wang Yi devoted a sizeable portion of his speech to rejecting claims about mass abuses in the far-western region.

The Trump administration early this year determined that atrocities there amount to genocide, and the Biden administration has concurred. On Monday, Canada became the second country to make such a determination, in a parliamentary vote which Prime Minister Justin Trudeau did not support.

Speaking through an interpreter, Wang said China’s policies in Xinjiang were designed to counter violent terrorism and separatism, and were succeeding. He gave statistics about population growth and the number of mosques in the region, and disputed that forced labor or restrictions on freedom were occurring.

“These basic facts show that there has never been so-called genocide, forced labor or religious oppression in Xinjiang,” he said. “Such inflammatory accusations are fabricated out of ignorance and prejudice. They are simply malicious and politically-driven hypes, and couldn’t be further from the truth.”

Figures recited by Wang included some dealing with the relative population growth of Muslim Uyghurs and Han Chinese in Xinjiang, implying that Uyghur numbers would not be growing if genocide was taking place.

After the resource-rich region came under communist Chinese rule in 1949, Beijing encouraged millions of Han Chinese to settle there, in a move critics say undermined Uyghurs’ cultural and religious identity.

A census in 1953 found that 75 percent of the Xinjiang population were Uyghur and six percent were Han. By the 2010 census, Han accounted for 40.48 percent of the population, while the proportion of Uyghurs had plummeted to 45.84 percent.

In his speech, Wang also laid out Beijing’s views on how the issue of human rights should be handled in the coronavirus pandemic era, charging that “certain countries are obsessed with politicizing the virus and stigmatizing other nations.”

He did not elaborate, but the U.S. has led calls for the Chinese Communist Party (CCP) to be more transparent about how the outbreak began in Wuhan in late 2019, with Secretary of State Antony Blinken making the point again in a BBC interview on Monday.

“With regard to China, one of the most important things going forward is that we get full transparency, full information sharing, a full understanding of how this virus emerged in the first place for purposes of making sure that we can prevent the next one from hitting us,” Blinken said. He added that ensuring such a crisis was not repeated requires countries to “be transparent,” to “share information,” and to “give access to international experts at the beginning of an outbreak – things that, unfortunately, we haven’t seen from China.”

Wang told the HRC that “human rights are not a monopoly by a small number of countries, still less should they be used as a tool to pressure other countries and meddle in their internal affairs.”

In his speech, British Foreign Secretary Dominic Raab said the U.N. should be given “urgent and unfettered” access to Xinjiang. In an editorial later in the day, the CCP paper Global Times flayed both Britain and the U.S. for their criticism of China’s human rights record.

“The Chinese public no longer believes what Washington says, but increasingly feels contempt for the U.S. and the U.K.’s chaos and hypocrisy,” it said. “China now has enough strength to support the country to walk its own way while ensuring its own security. Forces that play politics with lies can only harm their own country in the end.”

Global Times suggested that China “gradually build a set of levers that can be used to sanction outside provocateurs over human rights issues.”

On the day of President Biden’s inauguration, Beijing imposed sanctions against 28 Trump administration officials who oversaw China policy, including former Secretary of State Mike Pompeo, former White House trade advisor Peter Navarro, and former National Security Advisor Robert O’Brien. They and immediate family members are prohibited from visiting China, and companies and institutions they are associated with are restricted from doing business with China.