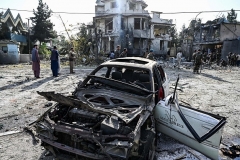 The aftermath of Tuesday's Taliban attack on the house of the defense minister in Kabul. Eight people were killed. (Photo by Wakil Kohsar/AFP via Getty Images)

(CNSNews.com) – For weeks, the State Department has been repeating the claim that the Taliban cares about international legitimacy and shares other parties’ interests in a “durable” peace.

But amid charges that the terrorist group may be committing war crimes as it seizes territory, a reporter at the department’s daily briefing on Wednesday said the assertions were “getting to the point of intellectual dishonesty.”

“There is no evidence whatsoever that the Taliban’s goal is a just and durable solution, none,” the Associated Press’ Matt Lee told spokesman Ned Price.

“With all due respect to your wishful thinking, a bunch of guys sitting around in a suite in a luxury hotel in Doha talking about peace doesn’t – that doesn’t mean anything on the ground.”

“So when are you just going – why don’t you just stop this facade?” he asked Price. “Because it’s – it’s – it’s insane. It’s ridiculous.”

Lee and other reporters noted that the U.S. Embassy in Kabul has raised the possibility that Taliban actions could constitute war crimes.

The Taliban also claimed responsibility for what it called a “martyrdom attack” on the Afghan defense minister’s house in Kabul on Tuesday that left at least eight dead.

Price earlier in the briefing condemned the attack, and slammed Taliban leaders for saying one thing – “that they support a negotiated solution to the conflict” – while their actions said another.

But then he returned to a point the department has been making through the summer, even as the Taliban stepped up its drive to defeat the government in Kabul as the withdrawal of U.S. forces moved ahead.

“The international community won’t recognize a group, a future Afghan government, that seizes power through violence and shows little or no regard for human life,” he said. “It would be a grave mistake for the Taliban to expect even a de minimis level of international support if they were to seek to do just that. They can only expect condemnation.”

“A solution cannot be durable if it is not just, because a just solution is not one that would accrue that international legitimacy.”

In his exchange with Lee, Price repeated the claim that the Taliban “has every interest” in a durable solution.

Later, Lee said, “this line that you guys keep saying is just – it’s just, it – nobody believes it except for – I’m – I doubt that you actually believe it, but whatever. It’s your job. You have to get up there and say it every day.”

“But I – I just – you have to acknowledge at some point that the Taliban has shown no interest in a just and durable solution that – or international recognition, apart from the fact that a bunch of – a couple guys, a dozen or so, are negotiating – quote/unquote negotiating – in Doha, isn’t that correct?”

In its statement claiming responsibility for the attack on the house of the defense minister, the Taliban vowed to step up attacks on key administration figures. Acting Defense Minister Bismillah Mohammadi and his family were not home when the jihadists detonated a car bomb before gunmen opened fire on the building.

In a series of tweets in recent days, both the U.S. and British embassies in Kabul have highlighted concerns about Taliban conduct, including:

“In Spin Boldak, Kandahar, the Taliban massacred dozens of civilians in revenge killings. These murders could constitute war crimes; they must be investigated & those Taliban fighters or commanders responsible held accountable.”

“We hear many reports of the TB [Taliban] placing landmines in civilian homes & hiding behind families while attacking the ANDSF. If confirmed, this could constitute a war crime. How can the TB claim to be fighting for Afghans while using them as human shields?”

“Concerning reports the Taliban entice ANDSF units to surrender with the promise they will be unharmed, and then those soldiers disappear in the night and their widows are forced to marry Taliban fighters. If true, these could constitute war crimes.”

“We are learning about the Taliban’s murder of 40+ civilians in #Malistan, Ghazni. If true, these could constitute war crimes. HR abuses must be investigated.”

On Tuesday the U.N. Security Council issued a statement expressing concern about the escalating violence as the Taliban presses on with its offensive, and condemning “in the strongest terms all instances of terrorism and deliberate targeted attacks against civilians.”

It also called for “the perpetrators” of a deadly attack targeting a United Nations compound in Herat to be brought to justice. An Afghan security guard was killed and others injured.

The U.N. mission blamed that attack on “Anti-Government Elements,” although a joint statement by the U.S. and other western embassies in Kabul made clear they hold the Taliban responsible.

Afghan Foreign Minister Hanif Atmar told a meeting of ambassadors and representatives of international bodies on Tuesday that the issuing of statements and press releases was not sufficient. He said the international community should exert greater pressure on the Taliban.

State Dept. Challenged Over Claim That the Taliban Cares About International Legitimacy (Jul. 7, 2021)