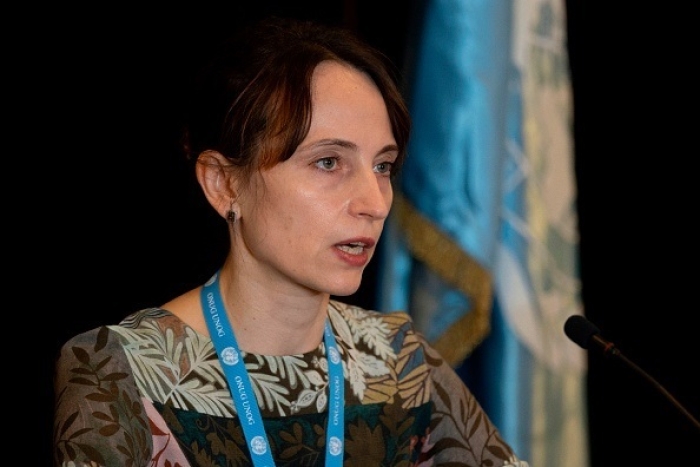 Alena Douhan, a law professor from Belarus, is the U.N.’s “special rapporteur on the negative impact of unilateral coercive measures on the enjoyment of human rights.” (Photo by Yuri Cortez/AFP via Getty Images)

(CNSNews.com) – For the first time in 17 years a United Nations human rights “expert” is being permitted to visit Iran. Her focus is not on the regime’s human rights record, however, but rather on Iran as a victim of Western sanctions.

Eleven human rights groups are jointly voicing concern that the regime in Tehran will use the visit “in a cynical attempt to deflect attention from its well-documented record of human rights violations.”

The individual concerned, Belarus law professor Alena Douhan, holds the post of U.N. “special rapporteur on the negative impact of unilateral coercive measures on the enjoyment of human rights.” (“Unilateral coercive measures” is the U.N. term for sanctions imposed against a country without Security Council authorization that are designed to bring about a change of behavior.)

Douhan said in a statement that during her May 7-18 visit, she would “gather first-hand information on the impact of unilateral coercive measures on the full realization of all human rights in the country.”

“My visit will aim at covering all walks of life and sectors affected by such measures, including secondary sanctions and sanctions over-compliance,” she said, adding that she would pay particular attention on the adverse effects of sanctions on “the most vulnerable segments of society.”

Appointed by and answerable to the Geneva-based U.N. Human Rights Council, dozens of “special rapporteurs” investigate and report back on a range of country and thematic mandates.

One of them is “special rapporteur on the situation of human rights in the Islamic Republic of Iran,” but the three consecutive holders of that mandate since it was established in 2011 have never actually been allowed to visit Iran.

The 11 human rights groups in a joint statement recalled that over the past 17 years, the regime has denied access to 14 U.N. rights monitors who had requested permission to visit. Among them were those focused on extrajudicial, summary or arbitrary executions, freedom of religion, minority issues, torture, and freedom of expression.

Now, however, Tehran is “inviting the only expert whose mandate is to look at external actors’ liability for rights violations in the country.”

The rights groups, which include the Iran Human Rights Documentation Center, United for Iran, and ARTICLE 19, called the regime’s action “a banal ploy to divert blame for Iran’s current human rights situation on sanctions.” 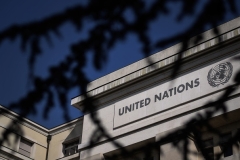 The United Nations building in Geneva that is home to the Human Right Council. (Photo by Fabrice Coffrini/AFP via Getty Images)

The organizations said their documenting of the human rights situation in Iran does include the impact of sanctions – including the “negative consequences” for the population of untargeted sanctions.

“These conditions have been and continue to be also the product of mismanagement, corruption, lack of accountability, and absence of the rule of law,” they said. “And they are the result of decades of economic neglect of areas where minority populations reside and state-sanctioned discriminatory laws, policies, and practices that exclude and marginalize large segments of the Iranian society.”

“The international community must not be fooled,” the groups concluded, “and Iran should not be rewarded for its attempt to avoid accountability.”

“All the sanctions were aimed at halting production in Iran,” he said in a speech. “Our workers have stood on the front lines and have not let that happen.”

The HRC appointed Douhan, a professor of international law at the Belarusian State University in Minsk, in March 2020.

She was the second person to hold the “unilateral coercive measures” post, which was created by a politically-divisive HRC resolution in 2014 – supported by countries that have been on the receiving end of sanctions, including Cuba, China and Russia, and their allies, and opposed by mostly Western democracies.

Doulan’s first report to the HRC, in the fall of 2020, was critical of Western sanctions targeting the regimes of Iran, Syria, Venezuela, and Cuba.

“Instead of calling out their gross abuses, the U.N. human rights official blamed problems in those countries on Western sanctions,” commented U.N. Watch, a non-governmental organization that monitors the United Nations and especially its human rights apparatus in Geneva.

In April last year, Douhan charged that the State Department’s “Rewards for Justice” program, which offers rewards for information leading to the capture of terrorist suspects, was violating the human rights of some of those targeted.

See also:
Russia, China Back UN Claim That US is Violating Rights by Offering Rewards to Capture Terrorists (Apr. 23, 2021)